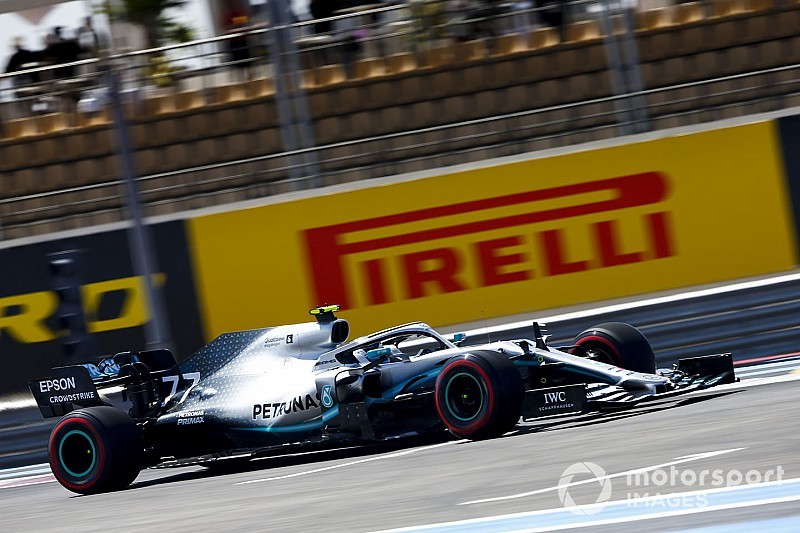 Bottas set the pace in the early running using medium-compound Pirellis – the C3 this weekend – by lapping 0.251s quicker than Hamilton with a time of 1m31.110s.

While he didn't make a massive improvement on his quick lap using softs later in the session, posting a 1m30.937s, this was enough to top the session by 0.424s.

Hamilton's fast run on softs was ruined by the rear stepping out at Turn 3, which sent him sliding sideways and behind at the exit of the corner then across the track and onto the Turn 4 runoff.

He rejoined just before Turn 5, just as Max Verstappen was on what should have been his first qualifying simulation lap.

The Red Bull driver ran a little wide after being left room by Hamilton when the rear stepped out on the power and sent him onto the run-off area – with the stewards due to investigate the incident after the session.

Hamilton did not complete another quick lap on the softs and - although did use them again on heavier fuel later in the session - so had to rely on his first-run time using mediums to take second.

Charles Leclerc was third fastest for Ferrari after jumping ahead of teammate Sebastian Vettel by 0.079s with his second quick lap.

Vettel had to set his time on his second attempt on his qualifying simulation run after backing off on his first push lap when he ran wide.

Lando Norris jumped up to fifth for McLaren in the final half hour, lapping 0.945s off Bottas to continue his and McLaren's encouraging practice form.

He was helped by Verstappen not being able to unleash the full pace of the Red Bull, running the new Honda 'Spec 3' turbocharger and V6 along with teammate Pierre Gasly and Toro Rosso driver Daniil Kvyat.

After aborting his first lap, Verstappen lost another to a wide moment and ultimately only made a 0.018s on his medium-compound pace.

Carlos Sainz made it two McLarens in the top seven with a lap 1.495s off the pace, which put him 0.016s ahead of the second Red Bull of Pierre Gasly.

Alfa Romeo driver Kimi Raikkonen was ninth ahead of Haas driver Kevin Magnussen after making a series of improvements on his softs.

He was backed up by Antonio Giovinazzi in 11th, just ahead of the lead Renault of Daniel Ricciardo.

Alex Albon, running the old-spec Honda components, was 13th fastest, just 0.003s behind Ricciardo, and ahead of the second Renault of Nico Hulkenberg.

Hulkenberg, like his teammate running an upgraded Renault, was 14th fastest but suffered a spin at Turn 4 with 24 minutes remaining.

Kvyat rounded out the top 15, 2.317s off the pace, although he does not need to focus on qualifying pace given the penalties mean he must start at the back or from the pits.

Racing Point drivers Sergio Perez and Lance Stroll were 16th and 18th, separated by almost six tenths of a second.

They sandwiched Romain Grosjean, who had a difficult session in the Haas starting with a big lockup on his first set of mediums that led to him curtailing his first run then continuing with struggles on the softs.

As usual, Williams pairing George Russell and Robert Kubica brought up the rear, with 0.581s separating the pair.

Hamilton under investigation for Verstappen incident