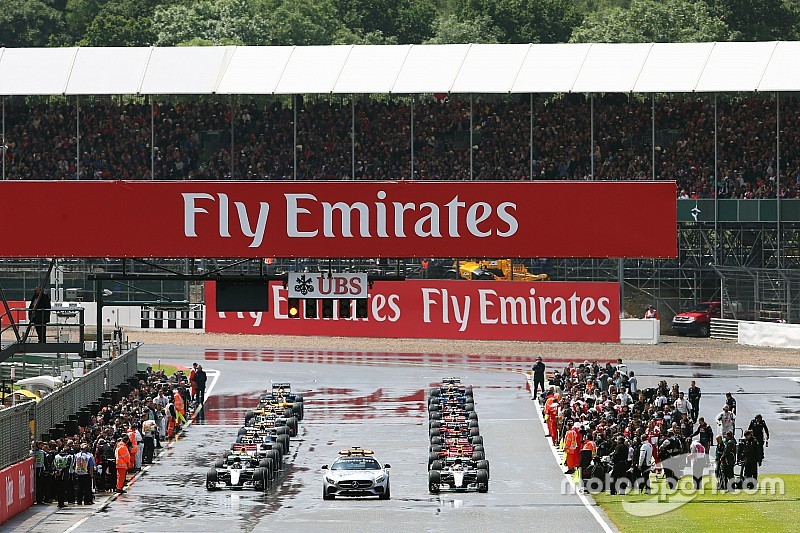 The F1 Strategy Group has agreed on the principle of standing starts in wet conditions, and it is understood that the change could be applied immediately.

Following criticisms of the lengthy Safety Car period at the British Grand Prix, F1 teams have been evaluating an alternative solution that will not rob fans of the spectacle of a normal start.

The proposal of the standing start after a Safety Car period at the beginning of a race was approved by team managers earlier this week, and has now been ratified by the Strategy Group.

Although it has not been confirmed, the likelihood is that drivers will not be allowed to drive straight into the pits for a change to intermediate tyres prior to this standing start, and will be obliged to go to the grid and do at least one racing lap before changing tyres.

Although the start procedures are laid out in the regulations, there are suggestions that current tweaks can be implemented without the need for a change of rules.

However, it is also possible that the FIA may choose to put it in the rules, which will require a vote from the F1 Commission and FIA World Motor Sport Council.

When asked by Motorsport.com about the idea of wet standing starts in Hungary, Lewis Hamilton supported the idea.

"It could be quite good," said the world champion. "In Silverstone 2008 we started in the wet, and it was heavy.

"I think we were on intermediates, but it was still pretty wet. A wet start is exciting, just as exciting as a dry start, if not more. I'm all for that."

The Strategy Group also agreed that from next year no work will be allowed on cars during race suspensions, including no tyre changes, to stop teams gaining an unfair advantage.

In Australia, Romain Grosjean in effect got a free pitstop by changing tyres during the red flag.