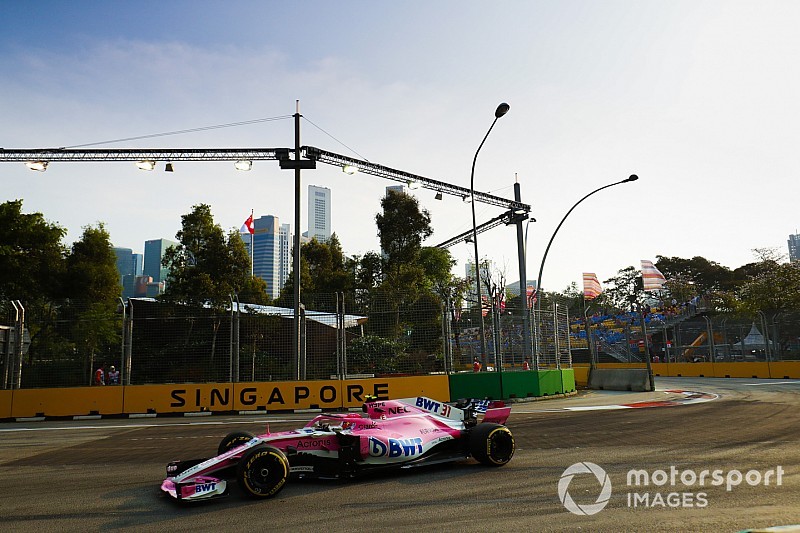 Force India has escaped a potential €85,000 fine in Singapore because a suspended fine generated by an offence earlier in the season was deemed not to apply to the revamped team.

The case has highlighted how some sporting elements related to Sahara Force India have been carried over to the new Racing Point Force India by the FIA, and others have not.

In Singapore the team was found guilty of an unsafe release of Esteban Ocon’s car in FP3, and received a €5,000 fine.

However, the stewards’ decision made no mention of the fact that at the French GP the original team received a penalty of a €15,000 fine plus a further €85,000 suspended for 12 months when Sergio Perez was released with a loose wheel.

At Paul Ricard the stewards noted “that this is the third incident of this nature involving the team in the past two years and the second this year, and hence the usual penalty has been significantly increased.

“This fine represents the view of the Stewards that the team needs to investigate its assembly and quality control procedures to ensure this type of potentially dangerous incident does not occur again, and believes the penalty is suitable and will also act as a deterrent in the future.”

Although the Singapore incident was not as serious, in that it did not involve a loose wheel, in theory it would still have been sufficient to trigger the suspended fine, as that applied to all forms of unsafe release.

However in Singapore the FIA stewards decided that the French GP penalty was awarded to a different team, and was thus no longer valid.

In making that call they referred to the stewards’ decision at Spa which explained the rationale behind the acceptance of Racing Point Force India as a new entry, which also confirmed that some sporting elements – such as gearbox and engine usage and tyre choices – would carry over from Sahara Force India.

“The stewards were obviously aware of the suspended fine,” race director Charlie Whiting told Motorsport.com. “And we made them aware of the decision made in Spa.

"It was a good decision I think, because it set out why the drivers wouldn’t get a fresh engine and gearbox allocation, for example. Based on that they felt it wasn’t necessary to invoke that suspended fine.

“I think the punishment was the normal punishment for that offence. It wasn’t like a wheel came off – he just left a little too early.”

In the Singapore incident Ocon left the pit box with the gantry red light on, and drove into the path of Kevin Magnussen.

The stewards noted: “Driver of Car 31 was preparing for a burn out start from his pit stop position on the team’s instructions. At the same time, Car 20 was approaching in the fast lane. Driver of Car 31 started his burn out while the red light was still being displayed, the light was then changed to green by the team.

“The team failed to observe the arrival of Car 20 and to therefore stop Car 31 from proceeding with the burn out, resulting in an unsafe situation.”

The stewards also took note of the fact that Ocon had come quite close to a Williams mechanic who was standing in the pitlane.

“Magnussen was in the 33m zone that we set out when you’ve got a 60km/h speed limit,” said Whiting. “What actually happened was Ocon went on red, and the guy who was on it thought ‘I’d better put green.’ There was a little bit of a mix-up.

“For me there was no issue with Magnussen, but the thing that I felt was a little unnecessary was there was a Williams guy standing out there for a pit stop, and Ocon was asked to lay some rubber, and was a little bit over-exuberant, I would have thought.”