The key moment was the speech from Ferrari's president Luca di Montezemolo.

Maranello, 14 December – Good wishes, reflections and good resolutions. As Christmas draws near, all families come together to exchange good wishes, look back at what’s happened and think about plans for the following year and the big Scuderia Family is no exception to this rule. 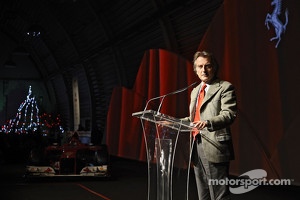 The traditional Christmas lunch took place today, bringing together within the logistics pavilion, all the Scuderia employees, the drivers and representatives of the team’s technical and commercial partners. On stage were the two principal players of the racing year, the F138, which for the nineteenth time in twenty years made it to a podium finish in the Constructors’ Championship and the 458 GTE, which brought home a trio of titles – Drivers’, Teams’ and Constructors’ – in the FIA World Endurance Championship.

The key moment, as always at this event, was the speech from president Luca di Montezemolo. “As ever, I am very happy to have everyone gathered here today, because within this building are many of the Ferrari men and women and I will never tire of saying how you are the true asset of our wonderful company. I want to thank all of you for the effort you have put in, even if there is disappointment at not having had the sort of season we would have wished for, especially after a positive start, that we all hoped would continue.

In part, that was definitely down to some external factors, but it was mainly down to us not bringing the necessary updates to the track, a mistake we must not repeat. Domenicali deserves the credit for having given it his all and it’s thanks to his work and that of his colleagues that we are making progress with the tools and technology which will help us return to winning ways. I for one am definitely sick of coming second: we have the ability, the competence and the spirit to return to the top step of the podium. Each one of you must work with great determination and take pole position in your own jobs: that’s what’s I’m asking of all of you.”

In looking back at the year that’s coming to an end, Montezemolo mentioned the important achievements in the GT Championships. “Once again this year, we have had great results in the world of GT racing. I wish to congratulate Amato Ferrari and his AF Corse team: Ferrari winning a championship with a Ferrari is a nice happenstance. I think everyone at Corse Cliente, the drivers and especially the new World Champion, Gimmi Bruni.

Continued development in the GT world and the technology transfer to road cars has always been an integral part of our activity. We have won with the 458 GTE, but I also quite like the idea of racing at Le Mans in the highest category: who knows, maybe one day we can return and win, say thanks and come home. Maybe we should give it some serious consideration…

Finally, Montezemolo had words of thanks for the two race drivers. “Over the past few years, Fernando has given his all and he deserves to have a competitive car with which he can win a World Championship with the Reds. I can understand his occasional moments of frustration, which we all share, but I am sure he is well aware what Ferrari represents and because of that, he will be even keener to give it his best shot.”

There was also a special and emotional word for Felipe Massa. “It will do Felipe good to get out from Ferrari,” said Montezemolo. “He will be back with new motivation, like footballers who change teams for a while before returning to their own. The doors of this company will always be open to a man and a driver of his quality. His name is linked to Ferrari I want to thank him for his contribution over the eight years he spent with us.”

The speech was interrupted by a long round of applause, ending with a standing ovation. There was much applause for Fernando Alonso and Felipe Massa too. Montezemolo presented the Brazilian with an engine from the F2008, while Felipe wanted Montezemolo to have the special helmet dedicated to Ferrari, which he wore in the last Brazilian Grand Prix.