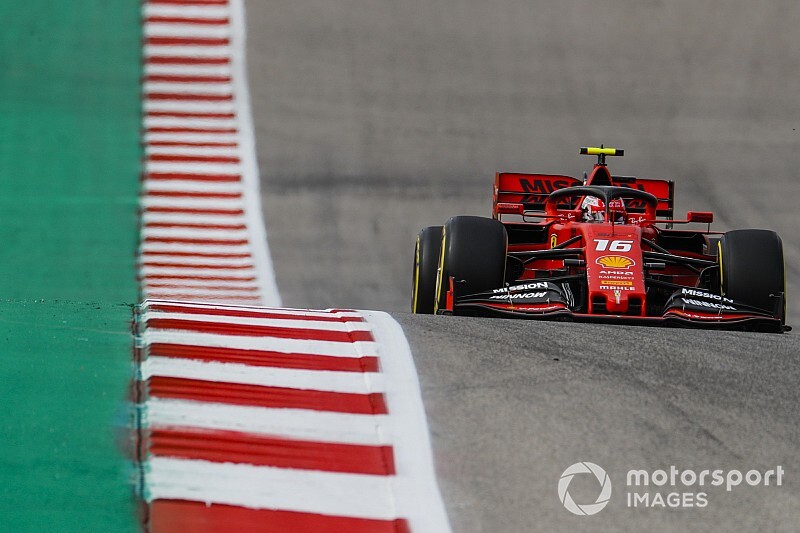 Ferrari insists the lack of straightline speed over the United States Grand Prix weekend had nothing to do with its Formula 1 engine.

With the Italian team upset that rival outfits were linking its drop in top speed to a technical directive issued by the FIA outlawing engine fuel-flow tricks, it is not hiding away from the fact that the performance characteristic of its car was different in Austin.

However, Ferrari insists the TD altered "nothing" on its power unit, and said that what was new was how it approached its downforce levels.

All season the Italian outfit has run with lower wing settings compared to its rivals to boost its speed on the straights.

However, this has been at the expense of cornering – where rivals Mercedes and Red Bull have proved to have the edge.

Ferrari team principal Mattia Binotto has revealed that for the United States Grand Prix, Ferrari elected to test with a higher downforce approach to see how that affected its overall pace against its main rivals.

Asked by Motorsport.com to explain why GPS traces showed Ferrari’s straightline speed performance was not as strong as recent races, Binotto said: “It is true that we were not gaining on the straights as much as the past races, but we matched our competitors in cornering – at least in qualifying.

“The trade off between grip limit and power limit has been moved this weekend, as a test on our side, to try to match their cornering. I think that it is as simple as that.

“We were still competitive in qualifying, but there was something in the race to understand and we need to understand what is best for the next races in terms of trade off.”

One other aspect that needs to be taken into account when analysing Ferrari’s straightline speed performance over the Austin weekend was that Charles Leclerc was running a Spec 2 engine.

Following an oil leak that stopped the Monegasque driver in final free practice, Ferrari elected to switch him back to a less powerful Spec 2 powerunit that had been used from the Spanish to the Hungarian Grands Prix.

Ferrari’s rivals had been quick to let it be known that the Italian team’s straightline speed advantage was not as great in Austin as it had been at previous races.

One source suggested that a 0.7-0.8 seconds advantage over the opposition at previous tracks had been trimmed back to 0.5 seconds last weekend.

The rowing back of Ferrari’s edge was something that world champion Lewis Hamilton confirmed when asked by Motorsport.com after the race if he was surprised how much his Italian rivals had faded.

“On the performance side, no, I’m not surprised,” he said. “You saw that advantage they had through the season and even last year they had a huge amount of power.

“But this year, out of nowhere, they had a ton of power. Really just at will, whenever they wanted, they seemed to have more.

“This weekend, I don’t know how their speed traces with ours, but it’s definitely not how it used to be. It was seven tenths we were losing on the straights before.”

But Binotto made a point in Austin on Sunday night of expressing how disappointed he was that rival teams had suggested the technical directive was linked to a change in the performance profile of his team.

He was clear that what the FIA had published made absolutely no difference to his team, and that the outfit had actually spent little time evaluating the details of the TD.

“Honestly we will look through the technical directive,” he said. “We have not done it this weekend in detail, we have seen it.

“I think it is number 35 of the season. It is a normal process where teams ask for clarification from the FIA and the FIA replying. Did it have an impact on the qualifying? I don’t know anything. I am not able to answer you.”