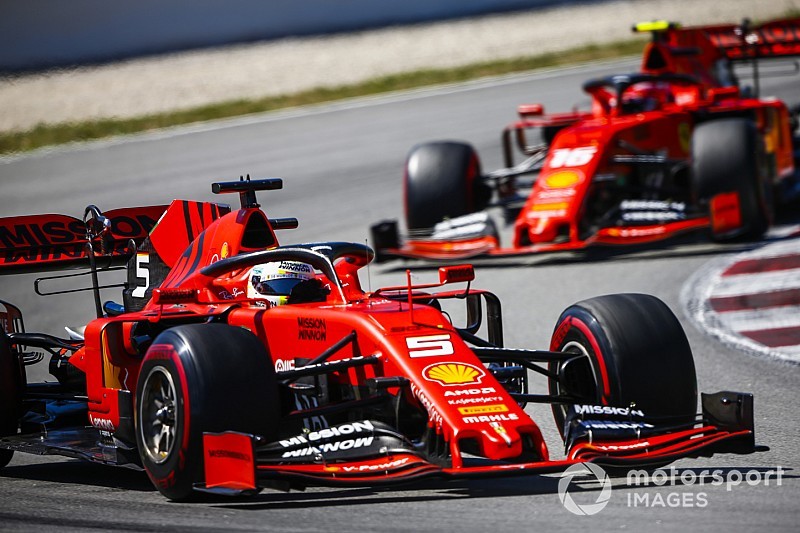 Ferrari's Spanish Grand Prix was "well below our expectations" and exposed weakness with its car after upgrades that proved "insufficient", says team principal Mattia Binotto.

A new engine and aerodynamic components were brought to Barcelona as Ferrari sought to gain ground on its rival Mercedes, which has dominated the start of the season.

However, Ferrari was comfortably beaten by Mercedes again in Spain, and even fell behind the Red Bull of Max Verstappen in the race.

Binotto said: "This was yet another race that ended well below our expectations. The updates we brought here to Barcelona, both on the aero front and on the engine, worked well and we are more than pleased with them, but they proved to be insufficient.

"Now we have to analyse and think about what did not work. And when it comes to that, as of today I don't think we have a precise answer."

Binotto said that Mercedes, which has finished first and second at all five races so far, was due "compliments" for its strong start to the season.

Despite how "disappointed" the team was with its own weekend, Binotto reiterated that its upgrades worked well but that the SF90 had clear flaws remaining.

"I think power wise and straightline speed we are good enough, but certainly we have some weaknesses on the car that were highlighted this weekend," he said.

"It is up to us to try to understand, to work, to assess and to improve in the future. It can only make us stronger in the future. That is the final story of this weekend."

Ferrari's race was compromised at the start by Sebastian Vettel locking up into the first corner while attacking the two Mercedes.

Both Vettel and Charles Leclerc were then delayed in their first pitstops by cross-threaded wheel nuts on their left-rear wheels.

"We know we have a lot to do and that we must improve," said Binotto. "That was made clear this weekend, but we are not losing heart.

"The mood in the team is still good and there's a strong desire to do better, so now we have to respond with our actions."