Ferrari’s Carlos Sainz was fastest during Singapore Grand Prix practice at Marina Bay in Singapore on Friday, the 17th round of the 2022 Formula 1 World Championship.

Mercedes’ Lewis Hamilton was fastest in FP1, while Sainz set the quickest time of the day under the floodlights in FP2.

Charles Leclerc suffered a brake problem that cost him valuable track time early on, and George Russell nosed his Mercedes into the Turn 11 barriers.

Teams gravitated to the softs in the second half of the session, with Ferrari’s Sainz having a huge moment on the exit of Turn 5 but keeping it out of the wall.

Red Bull’s Sergio Perez reset the P1 bar with 1m43.839s, before Lance Stroll fenced his Aston Martin at Turn 5. Verstappen just managed to get his lap in, a 1m43.117s, before the red flag came out to retrieve Stroll’s stricken car with 20 minutes to go.

Sainz, who was third-fastest at this point, had a big moment at the final corner but again escaped unscathed. With his brake trouble solved, teammate Leclerc jumped up to second, three tenths off Verstappen.

Hamilton then shocked everyone by going P1 in a session for the first time this year with 1m43.033s, 0.084s faster than Verstappen, who overshot Turn 16 on his long run on mediums. Leclerc was third, ahead of Russell and Sainz.

Perez suffered a driveshaft issue that forced him to coast into the pits near the end of the session.

After sundown, Russell ran early on new mediums, setting the pace at 1m44.661s before teammate Hamilton went half a second faster on 1m44.091s. Leclerc was delayed again, as his team removed the floor to fix an issue, and Verstappen lost the first 20 minutes due to a setup change at the front of his RB18.

Sainz rose to the top of the times with 1m43.710s before Hamilton grabbed P1 back with 1m43.668s, despite catching Nicholas Latifi’s Williams. Sainz then went quicker still on 1m43.231s.

Verstappen emerged on the hard tyres, taking fifth spot on his opening lap among the medium runners, 1.4s off the pace.

As in FP1, teams switched to the softs around the halfway point, with Sainz staying on top by lowering his fastest time to 1m42.751s and then 1m42.587s. Russell leapt to second, with Hamilton a further three tenths back in third.

Leclerc, who was running off schedule, grabbed P2 on mediums, albeit 0.295s off his teammate. He emerged on softs in the final 10 minutes and lapped in 1m42.795s, 0.208s away from the fastest time.

Verstappen stayed in the garage again, having more changes made, only rejoining the track on softs in the final five minutes. But he could only manage 1m42.926s, a third of a second off the pace, in fourth place behind Leclerc and Russell.

Esteban Ocon was best of the rest for Alpine in sixth.

Russell repeated his FP1 off but didn’t hit the barrier this time, while Hamilton had a big moment over the Turn 1 kerbs. Kevin Magnussen spun his Haas at Turn 14 and carried on.

Pierre Gasly’s AlphaTauri burst into flames as he was being pushed back into the garage, but later rejoined the session after the conflagration was extinguished. 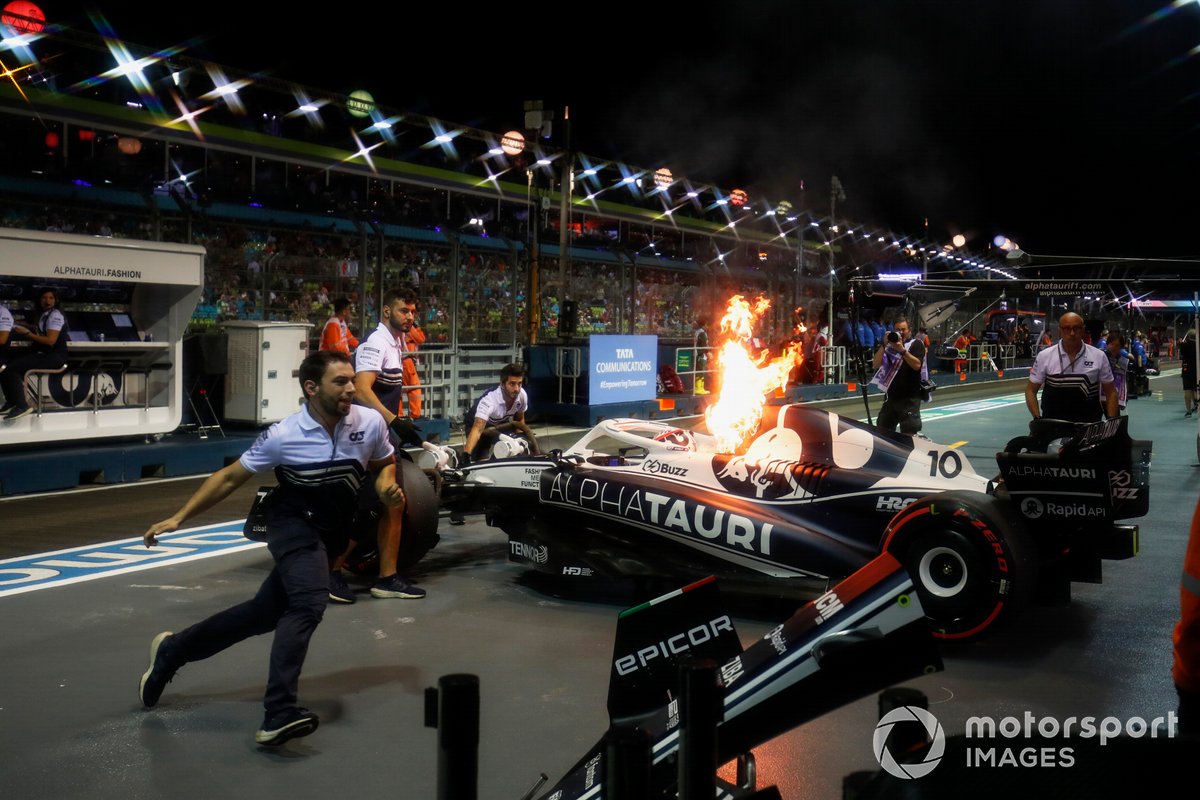 The car of Pierre Gasly, AlphaTauri AT03, catches fire in the pits