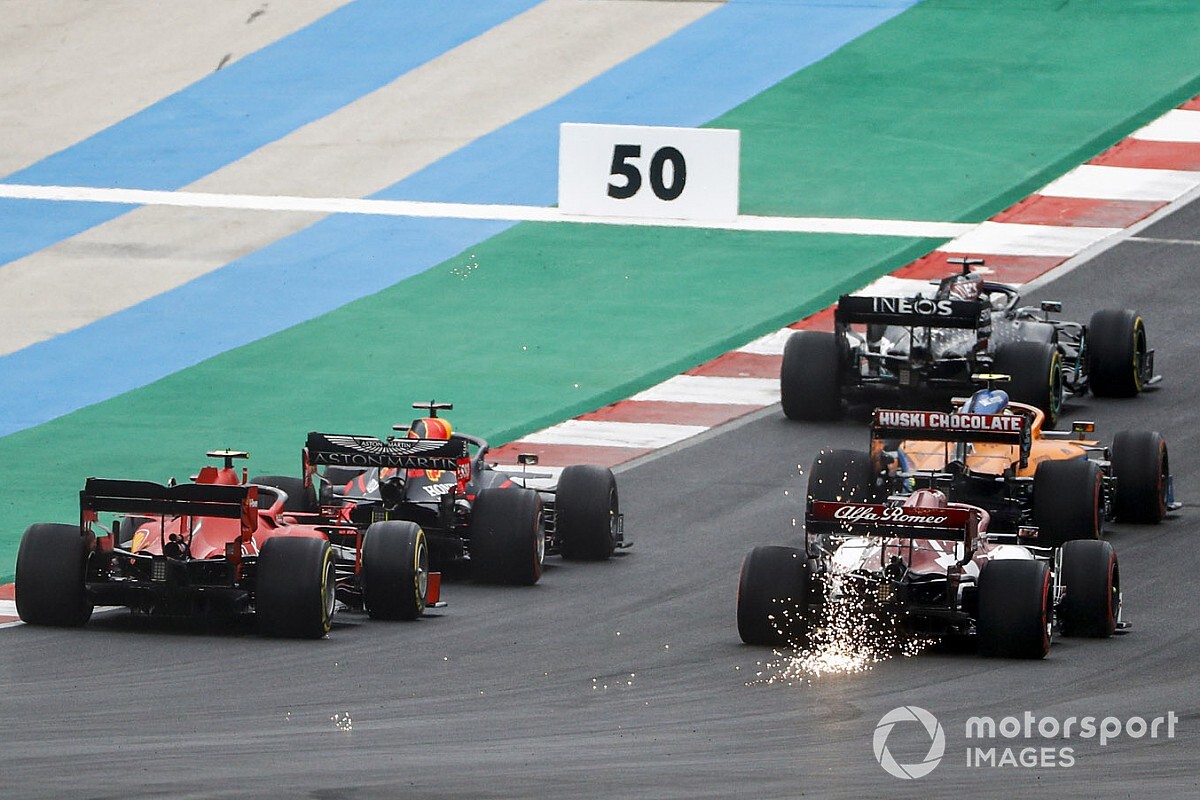 Lewis Hamilton won the Portuguese Grand Prix for Mercedes at Portimao in Portugal, round 12 of the Formula 1 World Championship, and his 92nd F1 victory surpasses the all-time record of the legendary Michael Schumacher.

From pole position, Hamilton held the lead off the startline with Red Bull’s Max Verstappen jumping past Valtteri Bottas (Mercedes) into second at Turn 1, but Bottas fought back, pushing him wide at Turn 3. Verstappen then clashed with Sergio Perez, sending the Racing Point spinning down to last.

With spots of rain falling, Hamilton struggled for grip and Bottas passed him for the lead a few corners later. Bottas led the opening lap but McLaren’s charging Carlos Sainz caught and passed him for the lead, as the McLaren seemed to have no issues in firing up its soft tyres in the slippery conditions, while Mercedes toiled initially on mediums. Verstappen fell back to fifth, but soon passed Lando Norris in the second McLaren.

Bottas used DRS to reclaim the lead from Sainz at the start of Lap 6, and Hamilton followed suit a lap later as the rain stopped and Sainz began to complain of tyre graining. Verstappen and Ferrari’s Charles Leclerc further demoted Sainz.

Hamilton set a sequence of fastest laps to catch Bottas and passed him using DRS at the start of Lap 20, and subsequently pulled well clear out front. Hamilton was 10 seconds clear of Bottas when he pitted for the hard tyre with 25 laps to go.

Despite some further brief rain showers, Hamilton eased his way to a record-breaking victory, finishing well clear of Bottas, Verstappen and Leclerc.

The McLaren v Racing Point constructors’ championship fight escalated as Norris and Stroll clashed at Turn 1, Lando sending Lance spinning after the latter’s bold bid to pass him around the outside. Both cars sustained wing damage and fell to the rear of the pack, with Stroll getting a 5s time penalty.

Perez saved Racing Point’s day with an amazing comeback drive from his opening lap spin, but the choice of running softs in the final stint came back to bite him in the closing laps, as Gasly passed him for fifth place with two laps to go. Sainz mirrored the move on the final lap, to grab sixth.

Perez finished seventh, ahead of the Renaults of Esteban Ocon and Daniel Ricciardo. Sebastian Vettel claimed the final point for Ferrari.

The Portuguese GP as it happened