Formula 1 drivers are discussing a new idea that could help improve the decision-making process at rain-stopped races, Motorsport.com can reveal.

After the washouts that led to both the Singapore and Japanese Grands Prix being delayed because of downpours, F1 drivers are convinced that a better solution can be found to help get track action resumed as soon as it is safe enough.

They believe that just using F1's safety car to judge water levels on track is far from ideal, as its performance and the amount of spray it throws up is not comparable to grand prix machinery.

This can lead to both unnecessary delays in getting races resumed, but also portray a wrong impression to fans and television commentators that conditions appear better than they really are.

Following discussions between members of the Grand Prix Drivers' Association (GPDA) in the wake of the events in Singapore and Japan, an idea has emerged for a new 'information laps' procedure to be introduced.

This would be to allow F1 cars to run for a few laps – either alone or behind a safety car - at set periods of time during rain delays.

Race control could then get direct feedback from drivers during and after these laps to better judge whether or not it is safe for the race to go ahead.

GPDA chairman Alex Wurz believes that these 'information laps' would be a hugely valuable tool in giving the FIA better information on track conditions, and making it clearer to the viewing public about whether or not it is too dangerous to resume action.

"The race director should have the option for what I call information laps," Wurz told Motorsport.com in an exclusive interview.

"So he could say, if the teams agreed to this procedure, that in 10-minutes' time we will send the cars around – like it's a going to the grid lap.

"On this lap, the drivers would all see what the conditions were like. We could have 20 opinions of the 20 drivers who put their lives at risk. And then it's a much more informed decision for the FIA from the drivers."

Wurz reckons that these extra laps would be hugely beneficial to trackside officials too, as it would help them know if visibility was good enough for them to operate safely.

"It's also better for the marshals because they will know if they can see the next marshal post," he said.

"If you can't see the next marshal post, you shouldn't really drive because you wouldn't see an accident in this white cloud of mist.

"So with these information laps, the marshals can also inform us of conditions. The race director will get a better-informed picture and all the millions of viewers around the world can see for themselves what it is like." 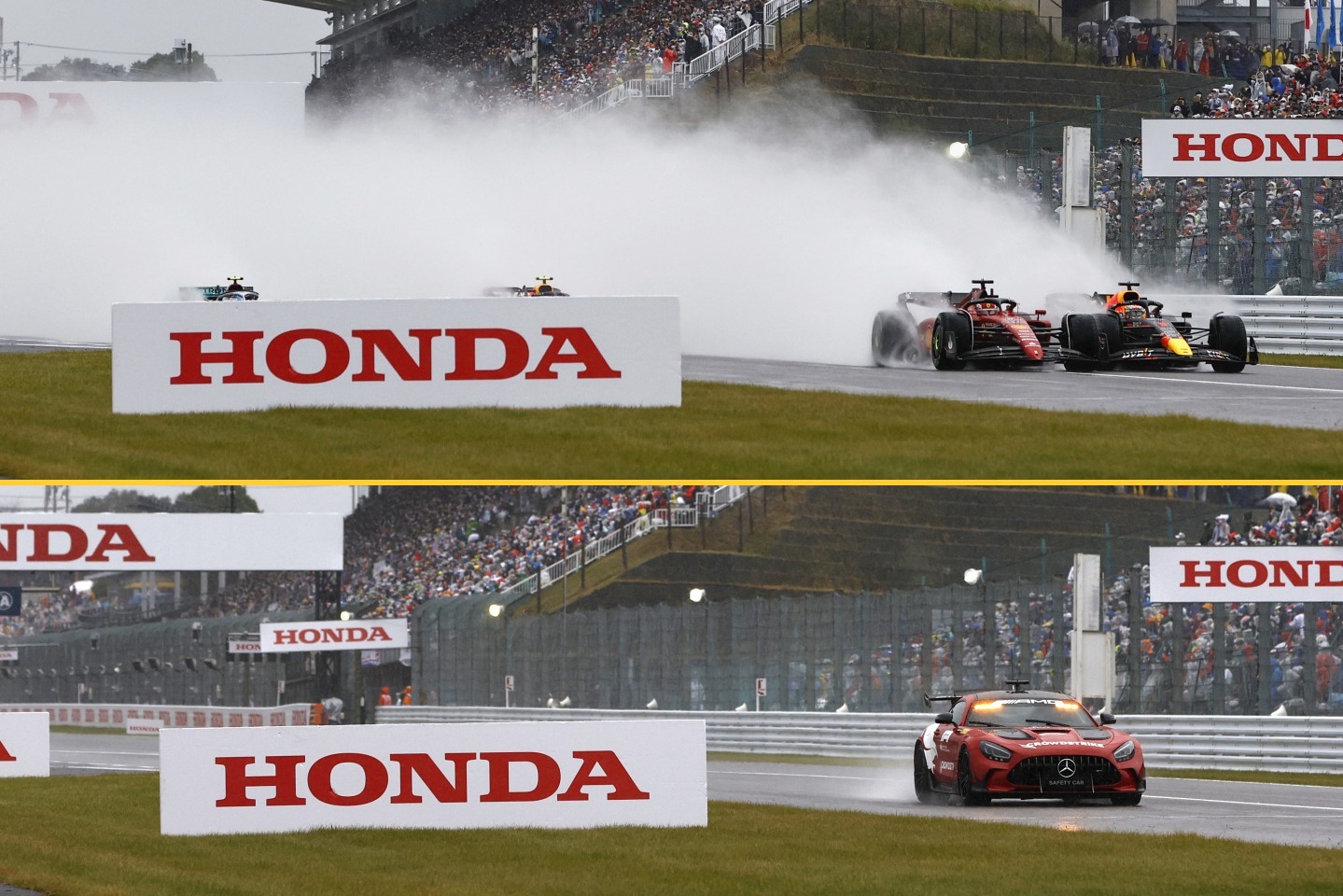 Spray comparison between F1 cars and the safety car at Suzuka

Wurz believes that fans often get the wrong impression of how bad conditions are from watching the safety car – which throws up such minimal water compared to F1 machinery – going around alone during rain delays.

This was highlighted at the Japanese GP (image above) when the spray from the safety car was so small compared to when the racing eventually got going.

"When you see the safety car driving by itself, with little spray, and the guy has fun and goes over the kerbs and controls the drift, it is completely, utterly different than when you can suddenly send the 20 cars out. So this is the delta."

He explained that the idea for these extra laps came from hearing Lewis Hamilton discuss conditions during the delays in Japan.

"It came when Lewis said that he can tell you in a minute [what conditions are like] by just driving out there: he can't tell you if he's watching TV," he said.

"I thought, 'my God, he's completely right'. But this requires a change in the rules and the procedure. And this needs to be made available very quickly to the race director."

The idea for the 'information laps' has only been discussed internally within the GPDA so far, but it is likely to be brought up with the FIA during discussions in Austin reflecting on events at the last races.

Wurz said that the experience of Japan has accelerated a push within the drivers' body to help improve things for wet-weather races.

"We are all definitely on board of finding a way, because we are here for our safety, our sport and our fans," he said.

"We just want to make sure that our fans understand, and they don't suddenly think we are all softies.

"It's not about being branded as we are the crazy ones. We have to seek safety. But if you realise that we don't see the other cars, then you respect the decision of a delay much easier.

"I know from the chats we had during the race, during the red flag and after, that Japan was a reminder of when the weather is grey, and the background is grey, and you don't have bright advertisements on the side, that suddenly you don't know where you are.

"No one could see Carlos [Sainz] stuck on the racing line and that's a clear reminder of a danger, like we had it Spa with Anthoine [Hubert] when you have a T-bone situation. This [impact] is not what the cars are designed for and could never be made for, to be honest."

While a move towards 'information laps' would require new rules, and detailed discussions on how to implement them in terms of race fuel usage and counted laps, Wurz thinks such issues can be sorted.

"You would need to sort out race distances and fuel loads etc., but I think we can find a solution because it would be helpful."

Wurz also believes that F1 could look to using high-technology solutions as well to help better inform decisions about visibility.

"You could use visibility sensors, which then is not a human decision, it becomes a quantifiable decision based on technology," he said.

"There could be additional tools just to ensure that we are consistent from situation to situation."