F1 clamps down on double yellows 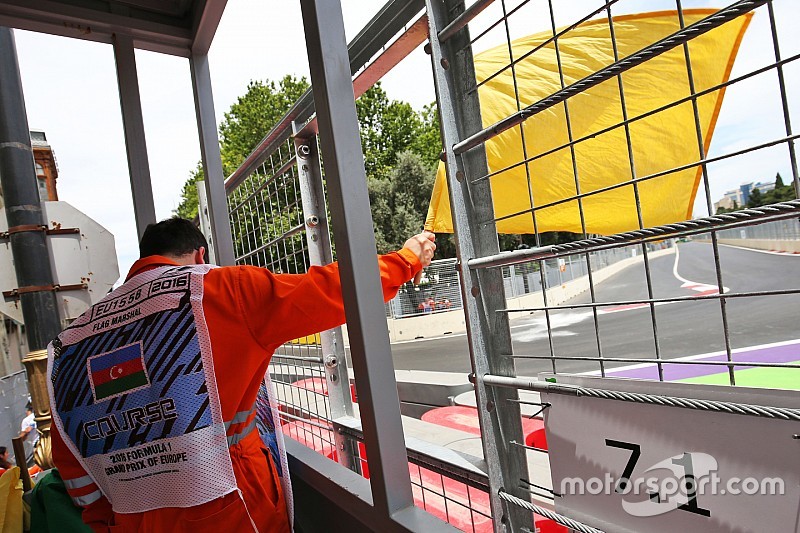 Formula 1 drivers have been told that they must now abandon quick laps in practice and qualifying if double waved yellow warning flags are displayed.

The issue of how much drivers should back off at double flag zones first emerged at the Hungarian Grand Prix as Nico Rosberg kept pole position despite running through such a danger zone.

The FIA's International Sporting Code only says about double yellows: "Reduce your speed significantly, do not overtake, and be prepared to change direction or stop."

In response to what happened there, F1 race director Charlie Whiting said that to prevent such situations coming up again, qualifying would be red-flagged if there was an incident that required double waved yellows.

But that change did not happen following discussions with team and drivers, and at the Singapore Grand Prix, Sergio Perez was handed a grid penalty after setting his best qualifying lap under double waved yellows.

It is understood that the matter was discussed in Friday night's drivers' briefing, where it was suggested that the rules laid down in the International Sporting Code were not especially clear.

As a response, for the Malaysian Grand Prix teams have been told that in the event of a double waved yellow flag being displayed, the FIA will expect drivers to abandon their quick laps.

A note sent to teams by Whiting said: "Any driver passing through a double waved yellow marshalling sector must reduce speed significantly and be prepared to change direction or stop.

"In order for the stewards to be satisfied that any such driver has complied with these requirements it must be clear that he has not attempted to set a meaningful lap time, for practical purposes this means the driver should abandon the lap (this does not necessarily mean he has to pit as the track could well be clear the following lap)."

In clarifying what is expected for single waved yellow flags, Whiting said: "Drivers should reduce their speed and be prepared to change direction.

"It must be clear that a driver has reduced speed and, in order for this to be clear, a driver would be expected to have braked earlier and/or discernibly reduced speed in the relevant marshalling sector.

"Drivers should not overtake any car in a single waved yellow marshalling sector unless it is clear that a car is slowing with a completely obvious problem, e.g. obvious accident damage or a deflated tyre."