Lewis Hamilton set the pace for Mercedes in the sole Formula 1 practice session for the Emilia Romagna Grand Prix at Imola on Saturday, edging out Red Bull’s Max Verstappen. 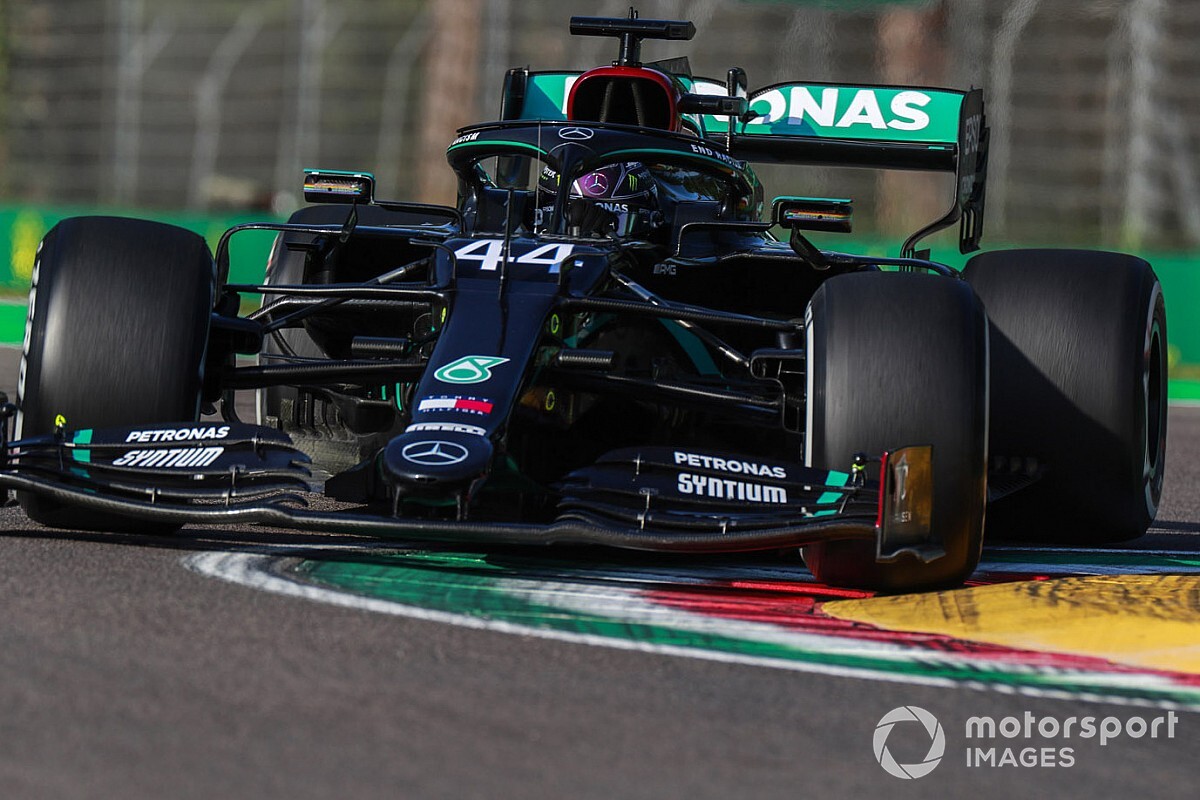 As part of the revised two-day race weekend format at Imola, drivers were handed a single 90-minute practice session on Saturday morning to dial their cars in ahead of qualifying later today.

In the first official on-track running for F1 at Imola since 2006, Hamilton was able to take top spot ahead of Verstappen and Mercedes teammate Valtteri Bottas.

Verstappen set the initial pace in practice on the hard compound tyre before Bottas was able to jump ahead on the timesheets on mediums as Red Bull and Mercedes opted for different run plans.

Verstappen and Bottas traded fastest times after making the switch to soft tyres and completing their qualifying simulations, with the Red Bull driver setting the faster time.

Hamilton initially split his rivals on the timesheets, lapping close to two-tenths of a second slower than Verstappen, only to go faster on his second push lap on softs with a time of 1m14.726s.

It was enough to give Hamilton P1 by 0.297 seconds from Verstappen, while Bottas was almost half a second down on his teammate’s fastest time.

All three set their best lap times with around 30 minutes remaining in the session before shifting focus to race simulations, similar to a traditional FP2.

A flurry of laps on the soft compound tyre saw AlphaTauri’s Pierre Gasly rise up to fourth place in the final few minutes of the session, leading the midfield cars and finishing just nine-tenths of a second off Hamilton at the top.

Charles Leclerc made a late improvement to finish fifth for Ferrari despite reporting throughout the session that his car was “difficult to drive” as he struggled with understeer.

Renault got both of its cars into the top 10 as Daniel Ricciardo and Esteban Ocon finished sixth and seventh, followed by Daniil Kvyat in the second AlphaTauri in eighth place.

Alexander Albon took ninth for Red Bull, lapping over a second slower than Verstappen in the sister RB16 car after having a number of laps deleted in the early part of the session.

Albon was caught out for exceeding track limits at Piratella and at the exit of Variante Alta, prompting the Anglo-Thai driver to vent his frustration about the stewards’ clampdown.

Albon was far from the only driver to struggle with track limits as more than 40 lap times were deleted by race control through the session.

Racing Point pair Lance Stroll and Sergio Perez took 10th and 11th place ahead of Sebastian Vettel in the second Ferrari. Vettel focused on hard-tyre running for much of the session, but made a late improvement on softs to finish 12th overall ahead of Haas’s Romain Grosjean.

Carlos Sainz survived a wide moment at Rivazza early in the session that sent him through the gravel to finish 14th overall for McLaren. Teammate Lando Norris finished two places behind in 16th as the duo were split by Alfa Romeo’s Antonio Giovinazzi.

Kimi Raikkonen finished 17th for Alfa Romeo ahead of Williams’ George Russell, who struggled with some set-up changes made on his car through the session.

Kevin Magnussen took 19th for Haas ahead of Nicholas Latifi, who propped up the timesheets for Williams in 20th and completed the fewest laps after an early brake issue.