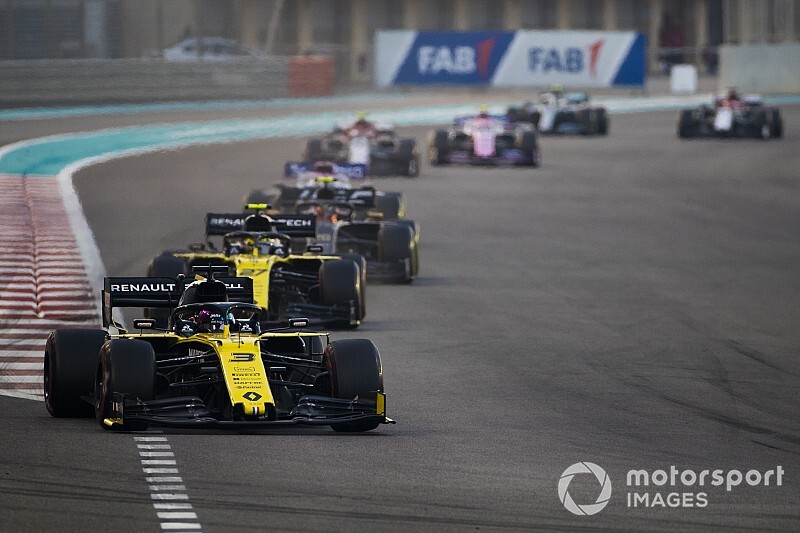 Leading Formula 1 drivers say that the lack of action in the Abu Dhabi Grand Prix when DRS was not working shows why it is needed with the current generation of cars.

A computer server problem early in the Yas Marina race prompted the FIA to disable DRS until lap 18 of the F1 season finale – with it working flawlessly from then on.

Although some fans have long argued for DRS to be dropped because it is too much of a gimmick, F1 drivers say that the Abu Dhabi experience of proof of why it is required at the moment.

Asked by Motorsport.com about the impact of the lack of DRS, Daniel Ricciardo said: “It made it even more boring!

“You need it on some tracks for sure and this is one of them. Tracks like Monza and that you could get away without it, but I think it's a great thing. I'm sure some people will say it's a bit artificial, but we need it, especially with these cars with the speeds we are going, otherwise there's no overtaking. So God bless DRS.”

McLaren’s Carlos Sainz, who used DRS to pull off a brilliant overtaking move past Nico Hulkenberg on the final lap of the race, backed up Ricciardo’s view that being without it was not a good thing.

“It just shows that Formula 1 nowadays without the DRS is impossible to overtake,” he said. “So the DRS is very much needed in modern F1.

“Hopefully in 2021 we will not need it because all of us don't like it, but at the moment if we want to see any kind of overtaking in F1 we need the DRS.”

Valtteri Bottas, whose charge through the field was stalled when the DRS was not working, said those moments proved its value.

“I was really eager to get closer to the podium and closer to the front, so it was annoying not to have it,” he said. “In my position, attacking and having the pace, we wanted to have it but obviously the cars that were defending, I think they were happy to not have it. So this is a tricky one.

“I think with the current cars we have in F1 it is a good thing. But hopefully in the future in 2021, maybe we can get rid of it.”