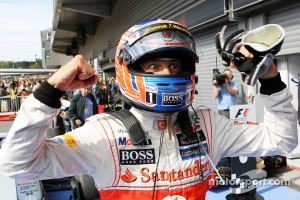 Jenson Button: “I’m sorry to all the fans if it wasn’t very exciting at the front! However, winning a grand prix is never easy: you’ve always got to look after the tyres and keep an eye on the gap behind. Today’s race was particularly tricky to read, in fact, because lots of cars were on different strategies so you never knew exactly where you stood.

“Turn One looked pretty crazy – in my mirrors, I could see cars all over the place. For me, it was all pretty straightforward though. Having said that, without having been able to gather long-run testing data from Friday, it initially looked like it was going to be a hard race to call. In fact, as things panned out, it was the opposite.

“It was unusual to be able to run a one-stop strategy. We got to lap 12 and the team asked me how the car was feeling; I told them that the balance was getting better and better, so we were able to get to lap 20 before pitting.

Lewis Hamilton: “First, I want to offer my congratulations to Jenson. I watched the whole race on TV and he did an absolutely brilliant job. It’s great for him and fantastic for the team. It also gives me huge confidence, going into the next race, knowing that our car has got fantastic pace. 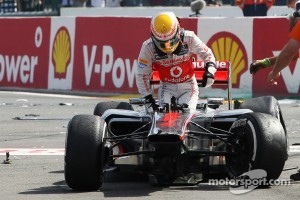 Lewis Hamilton, McLaren after he was involved in a crash at the start

“If we can get it right on our side of the garage, then we ought to be capable of scoring a strong result in Monza. In fact, I’m already channelling all my energy into doing just that.

“It’s been a difficult day for me – my race was so short that I didn’t even break a sweat out there. I don’t really want to talk about the start – I think everyone saw what happened – it’s just a shame.

“This wasn’t a great day for my world championship hopes either, but I certainly won’t be giving up.”

Martin Whitmarsh (Team principal, Vodafone McLaren Mercedes): “Jenson performed quite majestically all weekend. Friday was a wash-out, but he didn’t put a wheel wrong in the treacherous conditions. Saturday morning’s dry running was also tricky, but he handled the challenges it posed superbly.

On Saturday afternoon he utterly dominated qualifying. And then, to cap it all, today, he drove utterly flawlessly to record the season’s most imperious race victory; in fact, from lights to flag, he was never headed.

“In so doing, he made it look easy. But, when a driver manages a race win from pole position, leading all the way, the excellence of his performance isn’t always as obvious as when he wins it by attacking from behind. But Jenson has been super-quick all weekend, and he controlled the race with total authority, managing tyre wear masterfully all the way. It wasn’t easy, even if it looked that way, and I’m extremely proud of him, as is everyone at Vodafone McLaren Mercedes.

And, had Lewis not been embroiled in a first-corner shunt in which he was entirely blameless, we’d have duly scored those extra points. The accident was a great shame for Lewis, and for the other innocents whose races were also ruined, but that’s motor racing.

“We take a great many positives from the 2012 Belgian Grand Prix – not least the fact that we won it, which means that we’ve now won two grands prix on the trot. Our car is clearly very quick. Now, we aim to take that impressive form forward to Monza, where, in just a few days’ time, we’ll be aiming to score a hat-trick.

“Believe me: both world championships remain well within our sights.”

No Italian GP for 'Fly too high' Grosjean