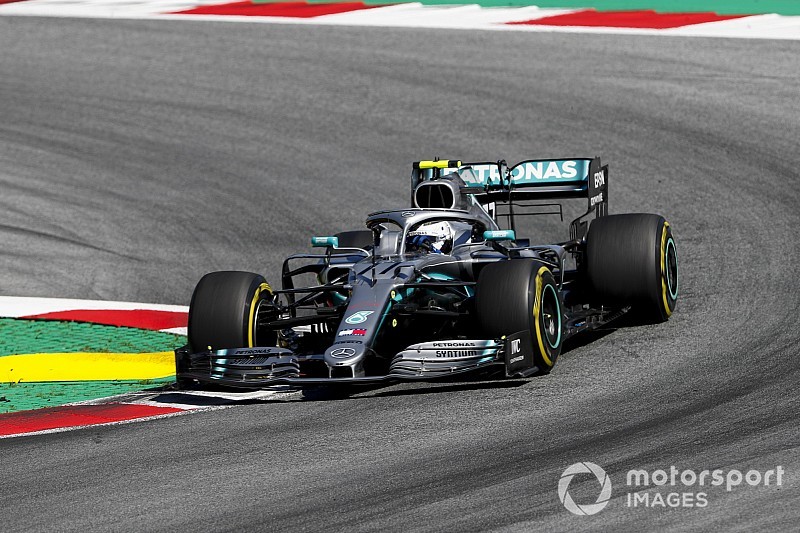 Mercedes Formula 1 driver Valtteri Bottas says a miscalculation contributed to the cooling issues the team faced in the Austrian GP being even more challenging than anticipated.

Bottas and teammate Lewis Hamilton both had to manage their power unit temperatures, making extensive use of a lift-and-coast strategy.

Having run second early on, Bottas eventually finished third behind Max Verstappen and Charles Leclerc, just managing to stay clear of a charging Sebastian Vettel at the flag.

The Finn called it the "hardest" race he's ever done in terms of looking after his power unit.

"We knew today was going to be hot, but we calculated it a tiny bit wrong as well," Bottas said.

"I think also the laptime estimates for the lift and coast was not quite spot on. The more we had to do lift and coast, we were losing bigger chunks of time than we actually predicted.

"For me it was the hardest race in terms of power unit management, temperature management, I've never had to manage it so much.

"Also we couldn't run the full power of the engine, because of temperatures, so that was costing quite a bit of laptime as well.

"So it was tricky, attacking and defending was pretty much impossible, and always if there was a car close ahead I was getting brighter, bigger warnings on the dash.

"So definitely a race that we need to learn from and make improvements, because there will be other hot races."

Bottas said it was particularly difficult when he closed within DRS range of other cars.

"It was quite sensitive. We were all the time on the limit. With this engine we still need to do many, many races, so we still want to play on the safe side. Today's circumstances I'm happy to be on the podium, because it was also getting pretty close at the end with Sebastian.

"If there would have been a couple more laps it would have been tricky to keep him behind me, he was clearly quicker and with the management I had to do – maybe he had fresher tyres as well – it.

"When you come to a session that i am down for you ask questions, and we chat after, and we find a way to split it, or you leave me to it would have been tricky. But the race is 71 laps and we calculated the strategy for that, and we were ahead."

Bottas said he had at least achieved one target in Austria by outscoring Hamilton and gaining five points on him in the title battle.

"A positive today for me this weekend. Being on the podium and getting to drink free champagne, that's always nice! It's a fact. And getting a few points against Lewis in the end.

"I'm second in the championship, and my target is to close in the points to Lewis, and that target was achieved this weekend, although it would be nice to be higher up on the podium there have been. There could be a worse weekend in terms of points."

Verstappen penalty would have been "incomprehensible" - Horner