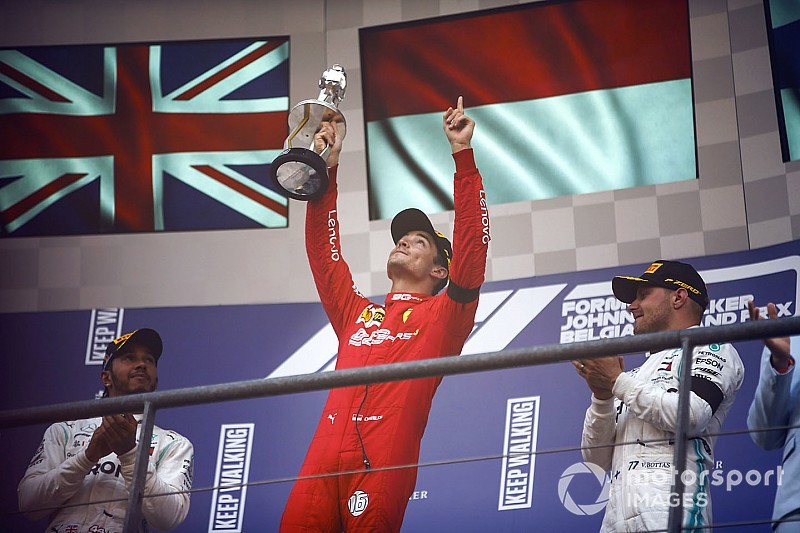 Charles Leclerc fended off a charging Lewis Hamilton to end his wait for a maiden Formula 1 win and secure Ferrari's first victory of 2019 in the Belgian Grand Prix.

Leclerc missed on victory in Bahrain because of an engine problem and Austria after a late fight with Max Verstappen, but suffered no such repeat as he finally converted position into victory at the third attempt.

Hamilton rapidly closed on Leclerc in the final laps but crossed the line 0.9s adrift.

The race was almost immediately placed under the safety car after Verstappen's race ended in the barrier at Eau Rouge on the first lap.

Verstappen had a slow start and was passed by Kimi Raikkonen and Sergio Perez on the run to La Source, but dived inside both under braking.

He passed Perez cleanly but hit Raikkonen as the Finn swept across to the apex of the corner, pitching the Alfa Romeo into the air – and the two made contact again on the exit of the corner.

The front left of Verstappen's Red Bull was damaged in the accident and broke completely as he entered Eau Rouge, which caused him to slide helplessly into the barriers on the outside.

Raikkonen continued after a trip to the pits, as did Daniel Ricciardo, whose Renault picked up some floor damage in a separate incident behind.

The safety car was due to return to the pitlane on lap three but was re-deployed before making it back to the pits, because Carlos Sainz stopped on track after a loss of power in his Renault-engined McLaren.

When the race did resume on lap five, Leclerc was gifted an immediate advantage as Vettel locked up at La Source.

Leclerc remained in control through his first stint, surviving a minor scare when he locked up at Les Combes and took to the run-off.

That incident was noted by officials, after a pre-event instruction to drivers to obey specific instructions if they went wide there, but Leclerc ended up escaping investigation.

Vettel kept Hamilton at bay despite coming under pressure through the first half of the race, and the Ferrari driver was first to stop on lap 15.

Leclerc, Hamilton and Valtteri Bottas stayed out for many more laps, and by the time the race leader pit on lap 21 he had lost too much time to Vettel to maintain the position.

Vettel's efforts on new tyres handed him a five-second margin when Leclerc emerged from the pits, but Leclerc swiftly ate into that with fresh rubber.

Leclerc was within DRS range with 18 laps still to go and Ferrari instructed Vettel to let his teammate by, which he did after a short delay in order to give Leclerc a tow on the Kemmel Straight and minimise the time loss.

Ferrari's strategy call banked Leclerc the win but it left Vettel vulnerable to the Mercedes drivers, and he soon slipped to fourth as his medium tyres fell away.

Leclerc seemed safe until Hamilton closed rapidly in the closing laps, but the championship leader was unable to mount an attack – and in any case, second place extended his lead over Bottas in the championship to 65 points.

After being passed by Hamilton, Vettel was told to stay out if he could keep Bottas behind but reported "negative" almost immediately and dived in for fresh tyres, in order to set the fastest lap and gain a bonus point.

New Red Bull recruit Alex Albon banked a surprise fifth place on his debut with the team after a fine charge from the back of the grid.

He was promoted to the best result of his F1 career after last-lap drama, as Lando Norris retired to hand Albon sixth and the London-born Thai then nabbed fifth from Racing Point driver Sergio Perez.

Norris was on course to be rewarded with his own career-best finish, after leaping up the order on the dramatic first lap.

The McLaren rookie then blitzed his midfield rivals but reported a sudden loss of power as he was starting his final lap, and pulled over on the start-finish straight.

That promoted Toro Rosso's Daniil Kvyat to seventh late on, before further drama occurred when Antonio Giovinazzi crashed out of what would have been eighth place.

Nico Hulkenberg thus finished eighth after passing teammate Ricciardo during a late charge, while Pierre Gasly battled to ninth in his first start since being demoted from Red Bull to Toro Rosso.

Lance Stroll completed the top 10 as Ricciardo's badly-worn tyres meant he slipped to 14th behind the two Haas drivers, who ran sixth and seventh early on but faded badly as the race progressed.

The Belgian GP as it happened