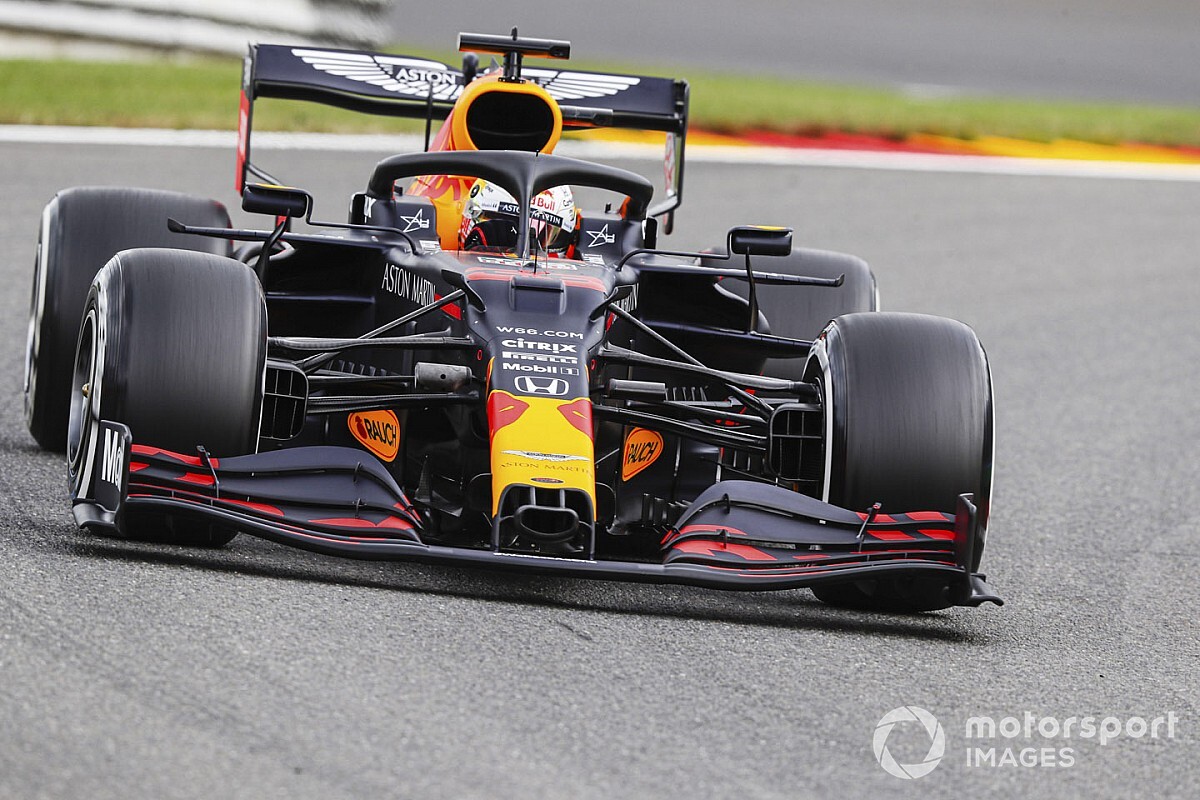 Max Verstappen led Daniel Ricciardo at the head of the times in second practice for Formula 1's 2020 Belgian Grand Prix, with Lewis Hamilton down in third for Mercedes.

After rain had fallen during the Formula 3 qualifying session shortly before F1's second practice got underway at Spa, the 90 minutes took place in dry conditions.

The damp track early in the session meant it was a while before any running took place, but by the end of the session Verstappen led the way, with neither Mercedes troubling the top of the times in the first and third sectors, suggesting their power units were turned down.

Ricciardo's high-profile session ended early when he lost hydraulic pressure running onto the Kemmel straight late on and was told to stop his Renault on track.

It took 15 minutes until a timed lap was posted, when Antonio Giovinazzi – who missed most of FP1 with a technical issue – and his teammate Kimi Raikkonen the took turns at the top of the order on medium and hard tyres respectively with a 1m49.716s and 1m46.402s.

Esteban Ocon and Alex Albon then lowered the benchmark on the medium rubber before Valtteri Bottas took P1 for Mercedes with a 1m44.658s – also on the yellow-walled rubber.

While Hamilton conducted his early running on the hards, Verstappen used his mediums to take first place for the first time in the session just before the opening 30 minutes had been completed with a 1m44.354s.

Hamilton then took second on his second flying effort on those hards to sit 0.2s behind the Red Bull before a long mid-session lull took place.

When the cars reappeared, they did so on the softs for their qualifying simulation runs.

Bottas shot back to the top spot with a 1m44.134s, but just a few moments later he was deposed by his teammate as Hamilton popped in a 1m43.840s.

Just behind Ricciardo, Verstappen was on course to move up the order with a new personal best time on the softs, but he improved so much – particularly at the very end of the lap – that he moved in first place with a 1m43.744s despite not topping an individual sector.

Hamilton, who had a massive slide exiting the pits in the final third of the session as he appeared to be changing a switch on his steering wheel and nearly lost the rear of his W11, was therefore shuffled down to third ahead of Albon, Perez and Bottas, but did finish with the quickest time in the long middle sector.

The rest of the session was dedicated to long-run data-gathering as usual, but this was twice interrupted.

First Ricciardo's car had to be pushed behind the barriers under the virtual safety car after he lost drive with just over 15 minutes of the session remaining.

The session was then red flagged when an advertising board placed on the run down the endurance pits straight fell onto the circuit – close to where F2 driver Giuliano Alesi had speared into the barriers at the start of the practice session for the support category, which was subsequently stopped.

That led to a final nine-minute run to the flag so the teams could finish their long-run work.

Lando Norris, who had to tour slowly back to the pits in the early laps due to an engine calibration problem, ended up seventh ahead of Ocon, Carlos Sainz and Pierre Gasly.

Lance Stroll wound up just outside the top 10 in P11, with Daniil Kvyat and the two Alfas – led by Giovinazzi – in 13th and 14th.

Last year's Belgian GP winner Charles Leclerc finished down in 15th for Ferrari, with George Russell putting his Williams ahead of Sebastian Vettel, as the Scuderia's power struggles appeared to be even more brutally exposed in Spa's lengthy accelerating zones.

The Haas drivers took P19 and P20 – with Romain Grosjean ahead of Kevin Magnussen – each with only 12 laps on the board as they again missed running while the team changed their customer Ferrari power units.

After they failed to set a time in FP1, Magnussen missed almost all of the opening hour of FP2, while Grosjean only appeared for the first time with under 30 minutes remaining.