Analysis: How Heineken plans to shake up Formula 1 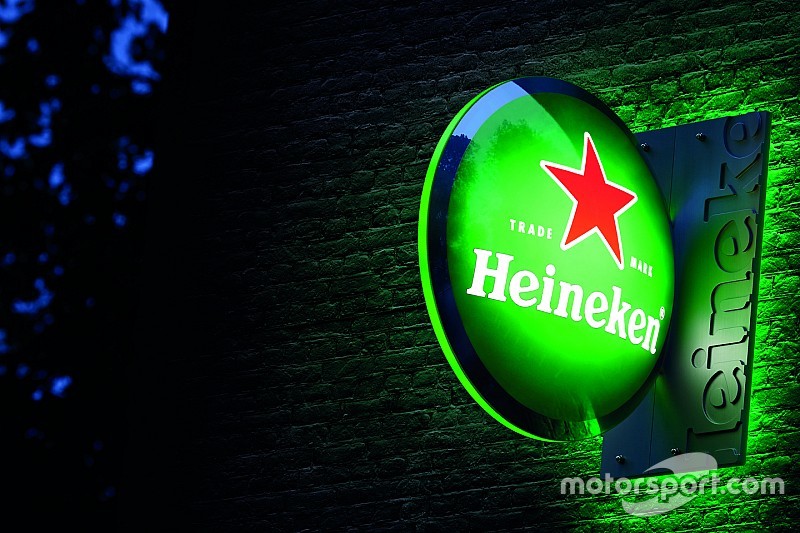 To steal its own catchphrase, Heineken's new sponsorship deal of Formula 1 could be about to refresh the parts of grand prix racing that other sponsors have been unable to reach.

For while Ecclestone's paymasters will be mostly delighted about the extra $200-$250 million added to their coffers over the next few years, the scope of F1's latest deal – and the beer brand's ambitious plans – are poised to deliver something that lifts the sport in ways never dreamed of before.

Heineken's vision is not of sitting back and being happy that its trackside logos are broadcast to millions of homes around the world, or that it can use pictures of F1 cars on special edition bottles (although both these things will be happening).

Instead, it wants to ramp up marketing efforts in a way that perhaps only Red Bull has been able to do so far.

By doing that, to tap in to the estimated $200 million potential new Heineken customers it thinks F1 can bring it, it will only help lift the sport's profile around the world.

It is talking about F1 promotional pushes in cities in the weeks before races, shop floor campaigns in bars, cafes and supermarkets around the world, worldwide ticket promotions and competitions, fan 'Meet and Greet' sessions with stars, flat out social media and digital marketing campaigns to fully engage the Facebook generation, big advertising campaigns, Heineken lounges and entertainment at tracks and venues around the world.

It wants to do all that it has done with the Rugby World Cup and UEFA Champions League, and more.

Heineken's global head of brand, Gianluca di Tondo, a long-time grand prix fan, senses so many opportunities for F1 to better market itself. And it is something that he thinks his company can help sort.

"The way we look at F1 is from two sides," he explained ahead of the official launch of the F1 global partnership deal in Montreal on Thursday.

"On one side it is still a platform that is loved by millions of people: and that is the 200 million on top of what we can reach at the moment. That really intrigues us.

"But as a marketeer, I personally believe it is largely unexploited. So I believe we can do with F1 things that no one has done before. And this is first of all based on the experience we have accumulated, based on the way of working we have."

Heineken is well experienced in making the most of sponsorship campaigns, and its ongoing partnership with UEFA through the Champions League and the Rugby World Cup have shown that there is a mutual benefit to such partnerships.

On the one side, Heineken gets exposure to potential new customers by pushing the sport so much to exploit its sponsorship, but equally the sport is also helped by being opened up to people who may not have tuned in before.

"If you take UEFA Champions League [before the Heineken sponsorship started] – it had a strong European platform and was very strong in South America. As a company we were very strong in Africa and Asia-Pacific," explained di Tondo about how Heineken and UEFA helped boost each other.

"We designed a platform in working together in stretching awareness of UEFA in Africa and Asia-Paciifc.

"Now if you choose a country in Africa, by chance, you go there and UEFA is the thing to watch. The final is the show of the year – and we have been creating this together. We did a Trophy Tour in Vietnam recently, which had a worldwide reach of 276 million people."

Central to Heineken's strategy of maximising the exposure of its F1 partnership will be through better use of social and digital media, which is an area where grands prix racing's official channels had fallen behind other sports in recent years.

"If we like it or not, that is the future," added di Tondo. "Like all the big brands, they are moving from traditional media and broadcasting to digital, because that is where the people are moving as well.

"For F1, it will be how can we help the fan and the casual viewer understand that F1 is bigger than just the race. F1 is not just two hours of the race, it is the 72 hours that turns cities in to playgrounds. It is such a rich world and there is so much more to discover beyond the border of F1.

"Most of the people don't know as it is still a bit of a closed world: you have restricted access to people, places, news. I think what is our role is to open up this world as much as we can.

"It will be a process: to give people the access. For example, having a meet and greet with Jackie Stewart, for an F1 fan, it would be amazing. This is what we are doing every day."

Di Tondo is equally aware that there is no point Heineken marching into Ecclestone's office and banging its fist on the table to demand everything straight away.

Its UEFA relationship has matured over 20 years to deliver some great campaigns; and he expects there will be a learning period where Ecclestone and Heineken get to know what each other want.

"We have been working with UEFA for 20 years, you don't crack this thing overnight. It will not happen like that. It is working together, showing results, making mistakes sometimes and then applying what you learn to make it bigger, bigger, bigger. I think we are going to do the same with F1."

He well knows that Ecclestone has not been a fan of expending time and energy on Facebook, Twitter and Instagram, but Heineken has experience of changing attitudes and having brands do things that were unthinkable in the past.

"We show our partners all these assets and they are open to consider these kind of things. In the past Bond was a taboo.

"They wanted us to have it very strongly globally managed. Today you see Bond events popping up everywhere in the world, because we were proving to them that everything we do is on a high-quality level.

"The Bond bottle was another taboo. They said, 'we don't put our logo on a beer bottle'. Then you start, and say 'okay let's do it once, let's do a second one and then suddenly it is everywhere – there are half a billion of them.

"It is to showcase how we do things and how they can immediately get a positive return. That is the best way.

"We are talking about Virtual Reality or Augmented Reality, that is the next step. It will come. No-one knows exactly how it will come, but if you look how many big players are investing on that you know it is coming.

"So what can a commercial look like in Virtual Reality? So we want to look at new technologies and use this big platform to pilot new technology. Our role is to excite them [F1] with the things that are coming."

What di Tondo sees is a future where F1's impact on digital channels is not measured in the millions any more, but the billions.

"For us the point is to go beyond broadcast. It is really to leverage the power of digital and social media.

"Then we will leverage massively F1 on our social media and our digital programmes. This is the way you move from the millions to the billions.

"If you take what we did for the UEFA Champions League, our Twitter programme – Champion the Match – this year 2015/2016 – it has a 2.5 billion people reach. That is the way you scale up what you do. I think it is a journey. It is a step by step."