What F1 has planned for driver-eye cam after Spa acclaim

For years there has been a debate about on-board cameras, and how accurately they portray the actual experience of driving a car. Many regard the current roll-hoop viewpoint as being just too artificial, and not representative – a lap of Monaco with Ayrton Senna from 30 years ago looks so much more dramatic.

The view from Alonso’s car was truly spectacular stuff, capturing every bump and every undulation on the magnificent Spa circuit. It really was the next best thing to being in the cockpit alongside the Alpine driver. The camera also provided an incredibly detailed view of the dashboard, possibly revealing more than the team had anticipated...

We’ve seen great footage from helmets in other categories, and F1 itself has experimented over the years, but it has never fully committed to any option.

For the moment Spa is just a trial, the first public outing for a system that hopefully will be adopted and used more widely in the future. If that happens we should get some spectacular shots every weekend.

“We've got experience with helmet cameras going back 15 years, maybe more,” F1’s director of broadcast and media Dean Locke tells Motorsport.com. “We've done some stuff with David Coulthard, we did some stuff with what was GP2 at the time. So over the years, we've tried it several times.

“Most of those solutions were on the outside of the helmet. And as developments go on in F1, that's not necessarily permitted. Hence why it's always been tricky to do. So we were always looking to try and get inside the helmet, if possible.”

There have been a few such attempts over the years, as Locke recalls.

“We've done some bits, not necessarily in races, but around testing and pre-season testing. We've done some with glasses that had a little camera on. But to do that in an F1 event, in a race or qualifying session, it’s a completely different environment.

“Also don't forget it's sometimes easier to record and then use it later on. But to actually take that signal and colour correct it and everything else in a live capacity is a whole different ballgame.”

F1’s partner in the current venture is Bell helmets and its parent company Racing Force Group. Bell has developed what it calls its Driver’s Eye system, with a micro camera that weighs just 2.5 grammes that is embedded on the left side of the helmet lining.

It’s been trialled extensively in Formula E over the past couple of seasons. However, F1 has only recently decided to co-operate with Bell and mate it to its own technology.

“It's approved by the FIA from a safety perspective. It's a very miniature camera that has been using our on-car system to take that signal and then deliver that back to us.

“I think what we want to do really is take it to a really good level. We’ve seen Bell’s commitment to doing a good job, and we’re also using our initiatives and our technology to make the delivery even better.”

F1’s broadcasting engineers have been co-operating with Bell on integrating the camera into its established on-board systems in order to produce the best possible live pictures. Some tweaking has been necessary in order to achieve the required quality.

“We've got some brilliant experience in camera technology and delivery of camera technology,” says Locke. “So working closely with them we think we can deliver a product that is up to F1 standard.

“We’re really working with them as the specialists, and then using our technology in acquisition and curation in getting a signal off a car at 200mph and getting that live into our systems.

“We're working together to see if we can get it to a point that we'd be happy to use it in F1. And today was just the first start of that testing, and seeing where we can get it better and better.

“We don't need it to be full 4K pictures or anything like that, because I think that's the unique thing about it, isn't it? That it has the vibration and so on. But we do have a lot of experience in that vibration technology and around that area that we can help them with.

“We've been working over the last few weeks on that delivery to try and get it to a really good standard. We're going to make some tweaks to the product, and also to our delivery mechanisms, to get the best out of it.

“And then again the week after, and the week after that. It's still very much an experimental test base for us to get it to a really good standard.” 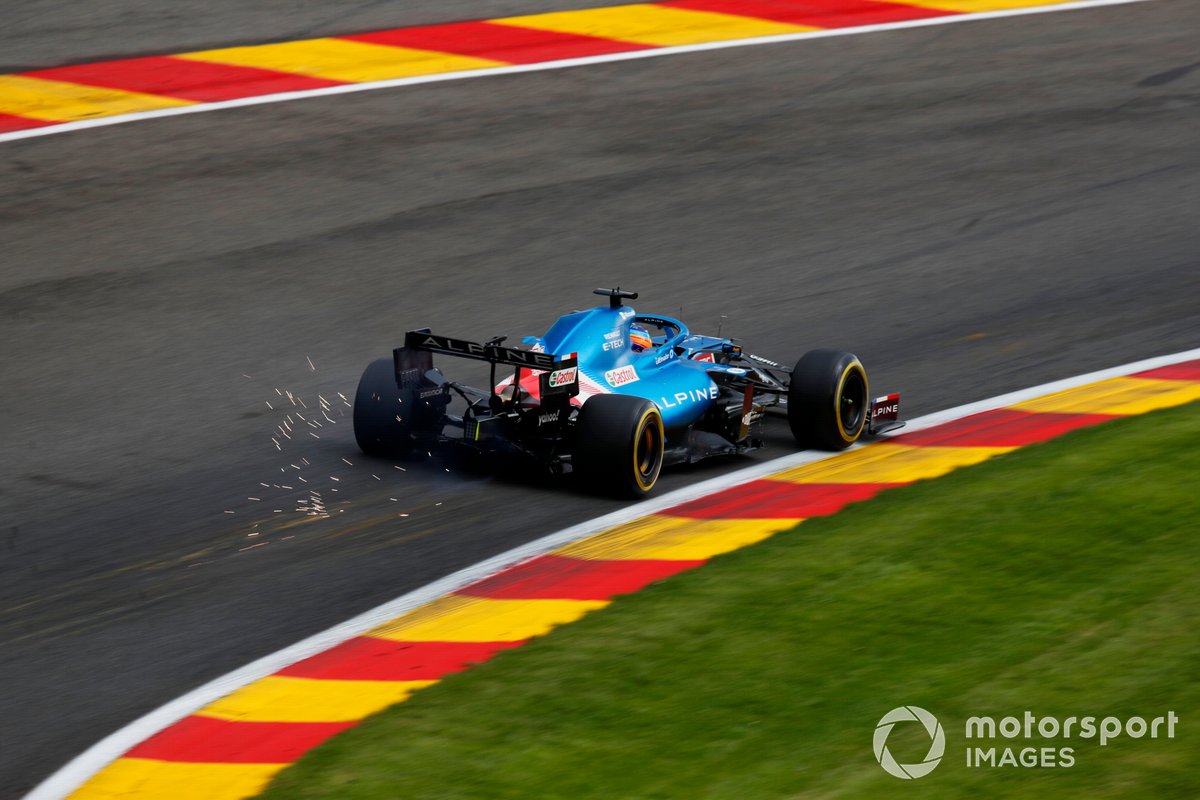 F1 faces a compromise in terms of the bandwidth between the car and the pits – while he was running the helmet camera Alonso’s usual roll hoop camera could not be used for live pictures.

“So there's only so much we can deal with at once until we get a bigger pipe off the car. It would be good to have more drivers, but there's also a finite amount of content we can get off the cars.”

As of Friday evening no decision had been taken on whether Alonso will be run the camera on track over the remainder of the Spa weekend.

“We're taking a bit day-by-day,” says Locke. “We wanted to run it today, we've got some bits that we wanted to do. We did some work between practice one and practice two. There's some work going on now. We hope to run it on Saturday, but also we have to talk to Alpine, and we have to talk to Fernando about doing it as well. And then who knows for Sunday? It's a bit of a step-by-step test.”

So what of next weekend’s race in Zandvoort on beyond? There are no firm plans as yet for further testing, but if the camera is used again it will be in a Bell helmet, at least in the short term. It’s not yet clear whether it will eventually be used by wearers of other helmet brands, as currently only Bell has FIA approval.

“There is no schedule, literally it's sort of day by day,” says Locke. “We've had a small conversation about next week. But this was very much a test, and we're happy to do that test openly, rather than doing it behind closed doors.

“We wanted to put it out because that's a really good way to get feedback. Do the public like it? Do the broadcasters like it? We're taking our coat off and showing what we've got and how we're doing it. But very much to reiterate, we're in test phase with it at the moment.”

It’s no co-incidence that it has appeared first at Spa – Locke and his colleagues knew that the view would be potentially be spectacular.

“We're about getting some really interesting and good shots. And this track lends itself to that, so it's something we wanted to do here, really. Hopefully it's whet the appetite of fans and our broadcasters!”

Early reaction has been positive, and if you want to see more, you might want to let F1 know via social media.

“We've seen some reaction online. F1 viewers generally just like new stuff, they like new tech. Broadcasters really like it, they particularly like it here, because it's such a unique track to do it at. But I imagine there are probably some circuits where it wouldn't be anywhere near as good.