Adrian Newey to go to Ferrari? The superstar engineer did not deny the rumor...

May 12 (GMM) Adrian Newey has refused to categorically rule out a future move to Ferrari.

Rumours in the Barcelona paddock at the weekend suggested the fabled but struggling Italian team had renewed its big-money offer to sign Red Bull's highly coveted technical boss.

When asked on Sunday if he will see out his F1 career with Red Bull, the 55-year-old Briton told Sky television: "I don't know. I need to think about it.

"At some point I am going to have to think about the future, but at the moment my focus is getting in front of the silver cars," Newey added.

It is not known for how long Newey is contractually tied to the Milton Keynes based team, and in Spain boss Christian Horner refused to divulge the details.

"For sure, the lure of Ferrari is always there," admitted Horner, "but there's the politics and the pressure that goes with it and the fact it is in Italy.

"Lots of us have been linked with Red Bull but so far none of us have gone," he added. 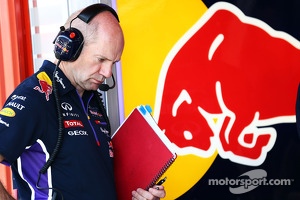 It was a busy weekend all round for the reigning world champions. At one point, video footage of an apparently flexing winglet caused a stir on the internet.

Engineering chief Paul Monaghan denied Red Bull had been up to old tricks.

"There was no deliberate intention to instigate the failure and no aerodynamic benefit was derived from the deflection," he insisted.

On the brighter side, after his early-season struggle to keep up with Daniel Ricciardo and a disastrous weekend of reliability, Vettel on Sunday appeared much happier after scything through the Barcelona field.

The reigning world champion had use of a new RB10 chassis in Spain, and he said driving it around the Circuit de Catalunya and setting the fastest overall lap was finally "fun".

"I feel like I have a car in my hands again," said the German.

Insight: One of the secrets of Mercedes' success and some interesting pointers from Spain