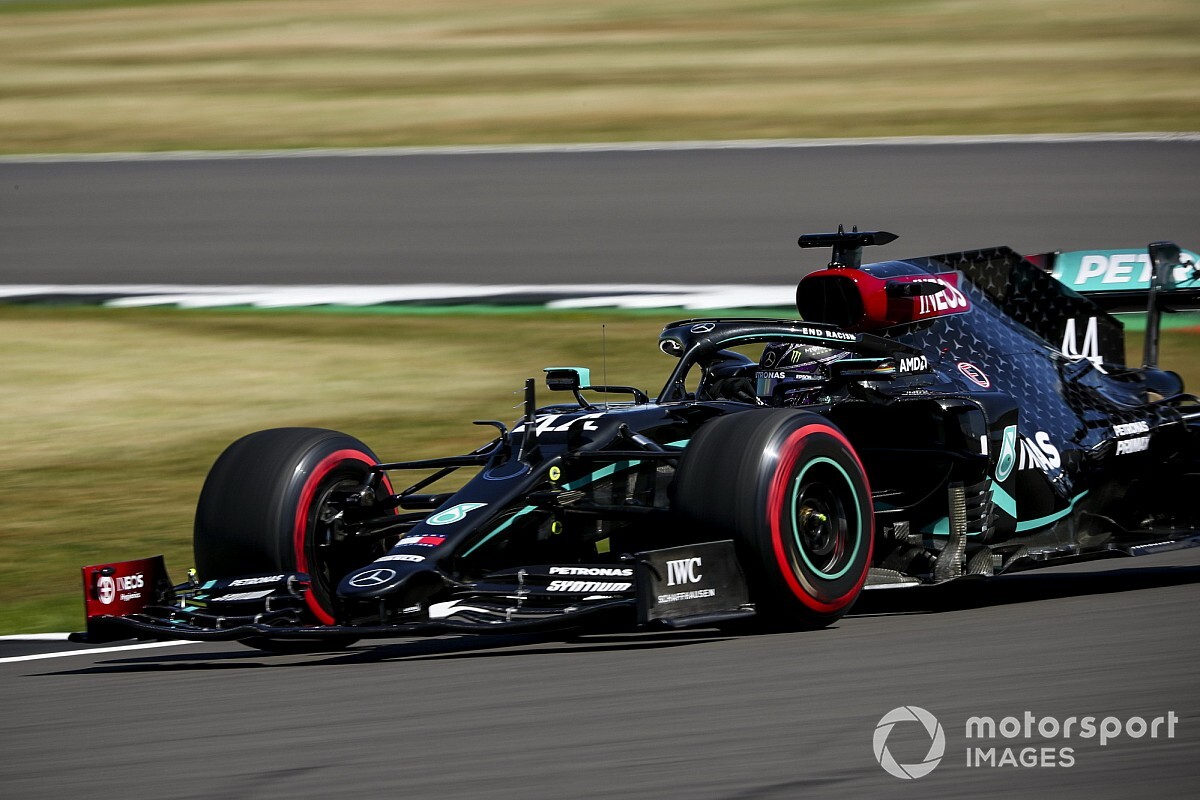 Under cloudy skies at a nevertheless hot Silverstone, Hamilton wound up fastest on the medium Pirelli rubber, 0.176s quicker than his teammate's effort on the soft tyres.

The session was ended with just over two minutes to go after late mechanical problems caused Sebastian Vettel and Antonio Giovinazzi to stop on track.

Kevin Magnussen and Daniil Kvyat set the early pace on the medium tyres before Racing Point's Lance Stroll established the top spot benchmark at 1m27.179s on the softs, with nearly 15 minutes of the 90-minute session completed.

Nico Hulkenberg then demoted his Racing Point teammate with his own initial run on the softs, before Stroll hit back to retake first place seconds before Bottas completed his first flying lap on the mediums at the 20-minute mark.

Bottas improved P1 to 1m25.917s – 1.21s quicker than Stroll had just gone – while Hamilton ventured out for the first time in the session.

The world champion lowered the P1 time to a 1m25.911s with his first flying lap, which was set on the soft tyres, which put him 0.006s quicker than Bottas's medium effort.

As the session moved past the half-hour mark, the Mercedes drivers had their rubber inverted, with Bottas moving to the softs.

He used the red-walled rubber to retake first place with a 1m25.782s, with the fastest time in all three sectors at that point.

Five minutes later, Hamilton established the fastest time of the session with a 1m25.606s – although Bottas kept his quickest time in sector one.

Just before the field focused on their long-run data-gathering, Daniel Ricciardo, who had earlier had a time deleted for running wide at Copse where the FIA is policing track limits, popped his Renault into third with a flying lap on the softs.

That lap left Ricciardo 0.815s adrift of Hamilton's fastest time, but ahead of Red Bull's Max Verstappen, who set his fastest time on the softs shortly after his former teammate had gone third.

Stroll and Hulkenberg set their best times on the medium rubber, with Stroll edging ahead by 0.3s in their intra-Racing Point battle, to end the session in fifth and sixth.

Charles Leclerc finished the session in seventh, ahead of McLaren duo Lando Norris and Carlos Sainz, with Esteban Ocon rounding out the top 10.

Vettel finished 14th in the standings but he disrupted proceedings late on when his Ferrari suffered an engine failure as he ran down Silverstone's old pit straight and he pulled over to the inside of Copse.

This was covered by the virtual safety car, but the session was red flagged in the final minutes when Giovinazzi's car lost drive approaching Maggotts and he ground to a halt in the runoff area ahead of Becketts, and FP2 as not restarted.