Can Ferrari get to the top step of the podium?

May 7 (GMM) Pastor Maldonado doubts Ferrari can turn around its disappointing start to the season and win races in 2014.

Fernando Alonso appeared to be putting the F14-T's early troubles behind him in China last time out when he finished the race on the podium.

But the Spaniard is not promising more of the same this weekend in his native Spain, where he marked his most recent Grand Prix win one year ago.

"We need to see," said Alonso. "We enjoyed the result of China but there is still a long way to go and we cannot promise anything for Barcelona."

Like all the major teams, Ferrari has used the three weeks between China and Spain to prepare a significant package of upgrades. 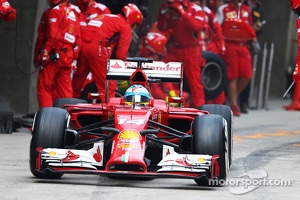 "We must find ways to be faster," he is quoted by Switzerland's Blick newspaper, "otherwise the 2014 season will be over soon."

Citing Ferrari sources, Italy's specialist Autosprint magazine reports that the 2014 car's small sidepods have been singled out by the team as a fundamental aerodynamic problem.

"We are learning how to get performance out of this new set of regulations and hopefully to make this car more competitive," said technical director James Allison this week.

Maldonado, Lotus' Venezuelan race driver, was asked by Spain's El Confidencial if he thinks Ferrari and Alonso can recover and win races in 2014.

"Ferrari is a great team and for sure they are going to give 200 per cent to allow Fernando to fight to win again. But it is always difficult to win," Maldonado insisted.

"If you doubt that, look at Red Bull and Lotus this year," he added, referring not only to his own beleaguered employer but also the reigning world champions.