The 2014 Liqui-Moly Bathurst 12 Hour is all but assured of a record race pace following stunning times set across four practice sessions today at Mount Panorama.

V8 Supercar refugee Maro Engel waited until just 10 minutes remained in the final practice session to bang in the fastest lap – his time of 2m04.4533s the fastest ever time recorded by a closed-roof car at the epic 6.213km circuit. 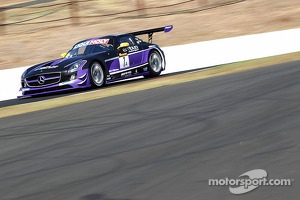 His time came at the very end of a hot day on the Mountain, a circuit that was simultaneously gaining rubber and loosing track temperature providing something of a ‘happy hour’ at the end of the day.

David Russell took Lamborghini to third position overall today, setting his cars’ fastest time in the first session of the day when temperatures were cooler.

Russell, along with Dutch Sportscar ace Peter Kox and car owner / driver Roger Lago, is actually entered in Class B following his teams’ last-minute decision to run the older model of their two Lamborghinis – dropping them to Class B.

Car owner Lago believes the change to the older model will actually benefit their outright hopes; the earlier specification car holding a straight-line speed advantage over the newer model.

A late-in-the-day run from Mika Salo saw one of the major pre-event favourites leap to fourth position overall; his Maranello Motorsport Ferrari 458 GT3 having a quiet day as Salo joined drivers Craig Lowndes, John Bowe and Peter Edwards in getting their car up to speed. 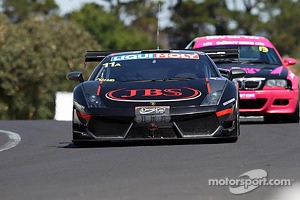 Rick Kelly ended the opening session for Class A & B cars in third position before British racer Alex Buncombe set the time that saw ‘Godzilla’ atop the times of an on-track session at Mount Panorama for the first time in 22 years, during third practice.

The first of the Audi runners was the No. 3 Phoenix Racing Audi R8 LMS Ultra in 8th position while the VIP Petfoods McLaren MP4 12-C was a strong 9th – making it six brands in the top ten. The Clearwater Racing Ferrari 458 completed the top ten.

A strong day for the Daytona Sportscar resulted in first in Class D (invitational 3000cc+) while Luke Youlden was the quickest of the professional drivers steering the three speedy little Fiat Abarth 500s entered in the race this weekend.

The first true track test of the Aussie designed and built MARC Focus endurance racers resulted in a promising performance from all three cars – their lap times dropping across the day as the drivers and team learned the cars.

The No. 70 Crimsafe entry steered by Grant Denyer, Andrew Miedecke, Adam Gowans and Gary Jacobsen ended up the quickest of the trio, and 27th outright, with the promise of more pace to come tomorrow.

The Vicious Rumour racing Ferrari 458 has withdrawn from the Event following contact at the top of the Mountain in the opening practice session – another car hitting the bright red Ferrari and sending them into the barriers.

The damage was too significant for the car to continue this weekend, ensuring drivers Tony D’Alberto, Dean Canto, Renato Loberto and Tony Defelice will have a weekend off instead of challenging for an anticipated podium finish.

The current status of the car is unknown ahead of qualifying tomorrow.

Saturday’s feature will be the battle for the inaugural Allan Simonsen Pole Position trophy, three qualifying sessions in store to set the grid for Sunday’s Liqui-Moly Bathurst 12 Hour.


" It’s been a very good day for us because both cars ran faultlessly and all the drivers managed to get laps in. It was great especially for Nico Bastian our other driver as he has not been here before, so in that respect he did an excellent job. We have all worked to finding the best set up and the car is handling pretty nicely. It is a pleasure to drive these cars round this circuit its a lot of fun. Obviously this doesn’t count for anything so we have to have a smooth day tomorrow.

“Its nice to have set the fastest GT lap around Mount Panorama. You only get a handshake for it which is good but we have got our eyes on the bigger prize and would like to stand on the top of the podium come Sunday.

“However, there is a lot of competition out there and we have to make sure we do the best we can. I think there will be more cars fighting it out than just the Erebus cars. There is a very quick Ferrari with Craig Lowndes, Mika Salo and John Bowe, and there is a extremely quick Nissan GTR. The B Class Lambo is quick too. I think there are at least 10 cars contending for the victory.”


“It was a great day for Erebus Motorsport with us finishing 1-2 in the final session. For me it was just about getting laps in the car. I’ve had very few laps in the car prior to here. I had one clear lap and it was a 2m5.3s which was pretty special. There is more to come and I can’t wait for the qualifying session tomorrow.

“Maro (Engel) is obviously very familiar in these cars and he is very fast. The grip is way more than you can imagine so I extracted as much as I could. Its just about chipping away at it. I feel much better in the car now and I feel I can now attack with ease in qualifying.”


“The times will come down. All it was this morning was the weather was cooler and we put on good tyres and maybe the other guys were sandbagging a bit, I don’t know. The car felt good and I wasn’t trying to do a mega lap. I’m in a great team and we are joined by Peter Kox who has a wealth of experience. There is a lot of continuity with the team and the priority is getting the car right for the race. We have got 12 hours to run.

“I’ve been around this place and its cool to post a good time but I can assure everyone it will be beaten again. Whatever people do in the morning is what is going to count for grid position. I doubt you will see fast times in the afternoon if the temperature is the same as today.

“Its a privilege to be in this event. If you are a driver and you look at the grid you cannot believe how good this line up is. There is heaps of experience out there and these quality drivers gives you a lift so you can push for the next level.”