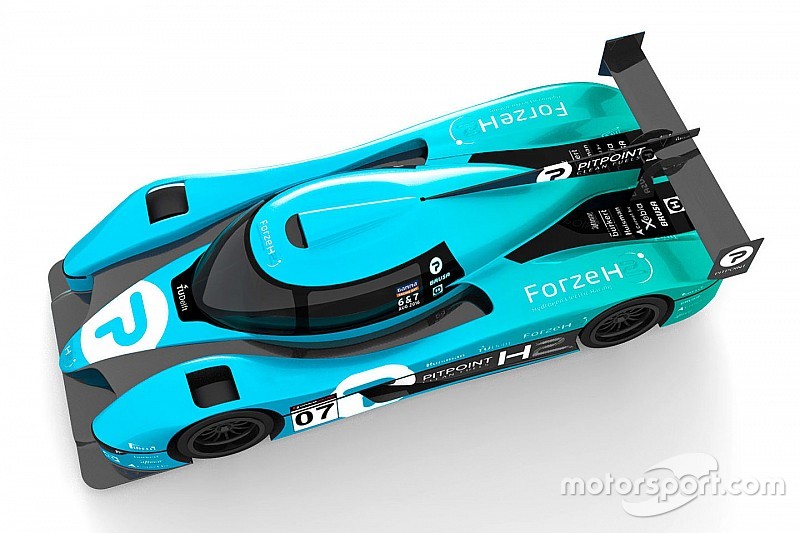 Students of Delft University of Technology in the Netherlands have presented the design of their new hydrogen fuel cell race car.

The car is based on an LMP3 chassis and will race against conventional fuel-powered cars this summer.

Motorsport.com visited Forze Hydrogen Racing Team in the ‘D:Dream Hall’, a dedicated part of the Dutch University, where innovative projects are being developed - like the prize-winning solar car, a Formula Student vehicle and the Hyperloop entry.

Delft students have been developing a range of hydrogen fuel cell powered vehicles since 2007 and competed in world’s first race for this type of race cars a year later.

Step-by-step, they scaled up to the design that has been presented on Thursday, a successor to their previous circuit race car.

With their previous model, they secured track records for hydrogen and electric vehicles last year on the Nurburgring-Nordschleife with former Formula 1 driver and Le Mans winner Jan Lammers and at Circuit Park Zandvoort at the end of the year.

The car is now being decommissioned as several components will be re-used in their presented vehicle.

The new car is based on an LMP3 monocoque and the energy to propel the vehicle will be generated by a 100 kW fuel cell, powered by hydrogen. The electric motors can generate a maximum output of 200 kW.

The Forze VII can reach a top speed of about 210 km/h and hits 100 km/h from standstill in less than four seconds.

“We will take part in the sport division of the Dutch Supercar Challenge during the Gamma Racing Day event at TT Circuit Assen in August," Forze Delft team manager Rick Everaert told Motorsport.com.

"It’s our target to win in this division and if we do, we will be the first team that can compete against gasoline-powered cars with a fully hydrogen fuel cell race car.

“We want to show the world that this technology is cool and that it’s possible to race with it.”

The team consisting of 70 students in total is tasked with building and testing the new race car in four months. “It will be tough and we will probably face a lot of sleepless nights,” predicted Everaert.

“Thankfully we are already familiar with most of the systems so if something goes wrong, and it probably will, we will know how to solve it. I don’t think we will get into the situation that we can’t resolve issues before we go racing.”

The car will be ready for testing on the 1st of April. “Then it will go on the test bench," Everaert said.

Instead of putting a famous driver behind the wheel, the team has opted to have development drivers Jan Bot and Leo van der Eijk pilot the hydrogen race car as they have years of experience with the advanced systems.

There were others that had a similar objective. GreenGT tried to compete in the Le Mans 24 Hours with a hydrogen-powered vehicle in 2013, but withdrew before the race.

In the same year, a hybrid hydrogen Aston Martin took part in the 24 Hours of the Nurburgring. “If we finish the race, then we are world’s first team that successfully promoted this green technology in a racing environment,” claimed Everaert.

Earlier this month, Pininfarina presented it’s H2 Speed, a powerful hydrogen performance vehicle. Motorsport.com found out that ten of these futuristic looking cars will be made, but there are no plans to race with them.

The team aims to develop their car in the coming years and to compete in the top categories of the Dutch Supercar Challenge. Competing in other championships is not currently in the plans, but won’t be ruled out.

“The Dutch Supercar Challenge is very generous in giving us the opportunity to optimise our systems in the coming years,” said Everaert.

“At some point, the team has said that a Le Mans 24 Hours participation would be a dream because the technology would be ideal for that. If you can refuel fast enough and drive long stints, then it would be really cool to join.

"But some development work needs to be done first. And if you look at the team’s enthusiasm, then I know we’ll be alright.”