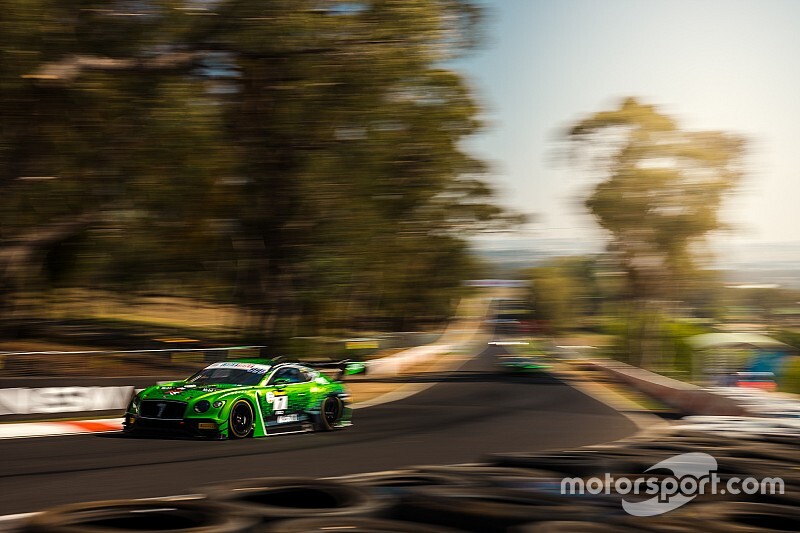 The #7 M-Sport Bentley continues to lead the 2020 Bathurst 12 Hour as the race heads into its final three hours.

The Bentley picked up where it left off at the six-hour mark, Maxime Soulet continuing for another half an hour before Jules Gounon took over the car.

That elevated Ben Barnicoat and the #60 McLaren into the lead, the Briton surviving a brief scare after running over a rear windscreen that had flown out of one of the MARC II cars.

Barnicoat pitted moments later to hand over to Blomqvist, the McLaren dropping to fourth behind the lead Bentley and the #999 and #77 Mercedes.

The McLaren recouped those spots as the two Mercedes undertook their next round of stops, however it was also dealt a blow in the form of a 30s penalty for a pitlane speed limiter infringement.

After an extended period of green running – the longest in the race's history – the Safety Car returned at the 7h10m-mark when the #63 FFF Lamborghini rolled to a stop on Mountain Straight.

Most of the lead group opted to stop, Jordan Pepper taking over the Bentley while Luca Stolz, now in the #77, dropped into second and Blomqvist returned in third.

The timing of the SC was also good news for the #18 KCMG Nissan, which, after Joao Paulo de Oliveira stalking Gounon trying to get back on the lead lap, could get it done in the pitlane.

The #7 Bentley benefited from some lapped traffic when the race went green 20 minutes later, building a 6s gap in the matter of laps. The gap grew as much as 20s before Pepper pitted to hand over to Soulet near the 8h30s mark.

By that point the McLaren found itself rapidly going from serious contention to off the lead lap, the car losing 30s during its seventh stop for the earlier penalty, before picking up a drive-through for a blue flags infringement.

Shortly before the nine-hour mark the Safety Car made a fourth appearance when the #8 Bentley, which had gone from the back of the grid to being well-placed on the lead lap, was wiped out of contention. Oliver Jarvis spun on the way out of the Dipper, the stranded Continental bringing out a full course yellow.

The three leading Mercedes had already stopped by then, the #888 with Maximilian Goetz at the wheel emerging best-placed in second, followed by Yelmer Buurman in the #77 and Maximilian Buhk in the #999.

The McLaren, meanwhile, was able to climb back onto the lead lap with a stop under the Safety Car, Alvaro Parente taking over the car.

The race restarted shortly after the nine-hour mark.