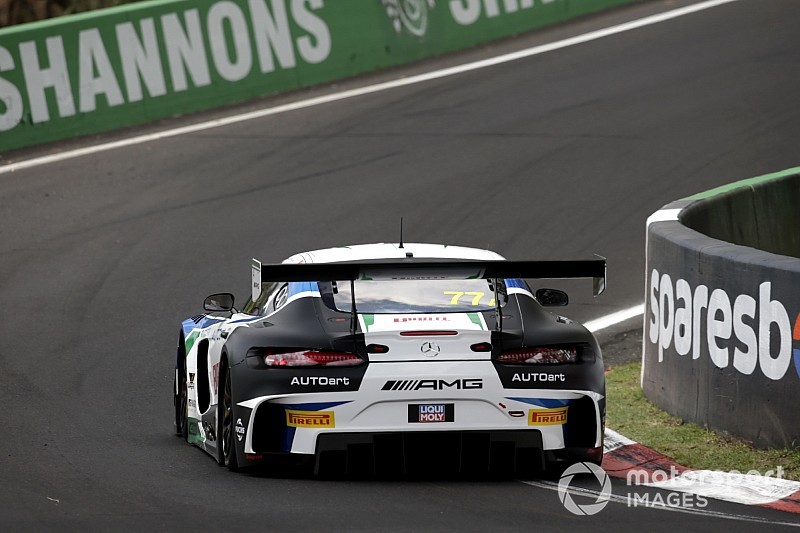 The #77 Craft-Bamboo Black Falcon Mercedes emerged on top of a battle with the #999 GruppeM Mercedes and the two M-Sport Bentleys in the opening quarter of the 2019 Bathurst 12 Hour.

The leading pair of AMGs made light work of the opening hour of the race, Max Buhk in the #999 GruppeM car initially running ahead of Luca Stolz in the #77 Craft-Bamboo Black Falcon entry.

The gap between the two fluctuated between a few tenths and a couple of seconds, while the #107 Bentley, Steven Kane at the wheel, sat around 10s behind in third.

Not long after the hour-mark the front-runners made their first stops, Stolz the first to hit the lane on the 32nd lap, followed by Buhk a lap later. The two AMGs returned to action with positions reversed, Stolz holding a narrow lead over Buhk.

Kane also came out of the first round of stops with his position in tact, followed by Bentley teammate Vincent Abril, who put in a storming opening stint in the #108 Continental.

As the race neared the 90-minute mark the Safety Car made its first appearance when David Calvert-Jones looped his Class A Porsche on the run to McPhillamy Park.

The two Mercedes struggled to re-establish their advantage when the race restarted 10 minutes later, Kane putting pressure on Buhk as Abril hung on to the lead pack.

It stayed that way until the next caution right before the two-hour mark, sparked by Nick Percat in the #27 HubAuto Ferrari tangling with the #96 MARC entry on the way into Forrests Elbow.

The race restarted on Lap 54, but only briefly. Andreas Baenziger hadn't even made the control line when his Aston Martin ended up in the wall at the exit of The Chase, leading to the third caution.

Buhk pitted from second and handed over to Max Goetz, while both Bentleys also opted to make a second stop.

The #108, with Andy Soucek now behind the wheel, got the end of pitlane ahead of its sister car, however stalled trying to rejoin the track.

The third restart of the day came right on the 2.5-hour mark, Stolz comfortably pulling away from Christopher Haase in the #2 Valvoline Audi.

Behind the lead pack there was a hair-raising moment on the lap after the restart between Aussie legend Craig Lowndes in the #888 Triple Eight Mercedes and Martin Tomczyk in the #42 Schnitzer BMW. The pair made contact coming out of The Chase while scrapping over sixth spot, both cars lucky to escape serious damage.

On Lap 64 the leading Mercedes surrendered its lead to make its second stop, sightly earlier than planned thanks to a punture, with Stolz handing over the Garry Paffet.

The car has settled back into 13th, fourth in what was the leading train behind the Bentleys and the #999 Mercedes.

Currently leading the Pro-Am class is the #51 Spirit of Race Ferrari with Paul Dalla Lana at the wheel, while the Grove Porsche is in control of Class B.

The #50 M Motorsport KTM leads Class C and the #91 MARC V8 heads the way in the Invitational class.

You can watch the Bathurst 12 Hour live and free with Motorsport.TV.