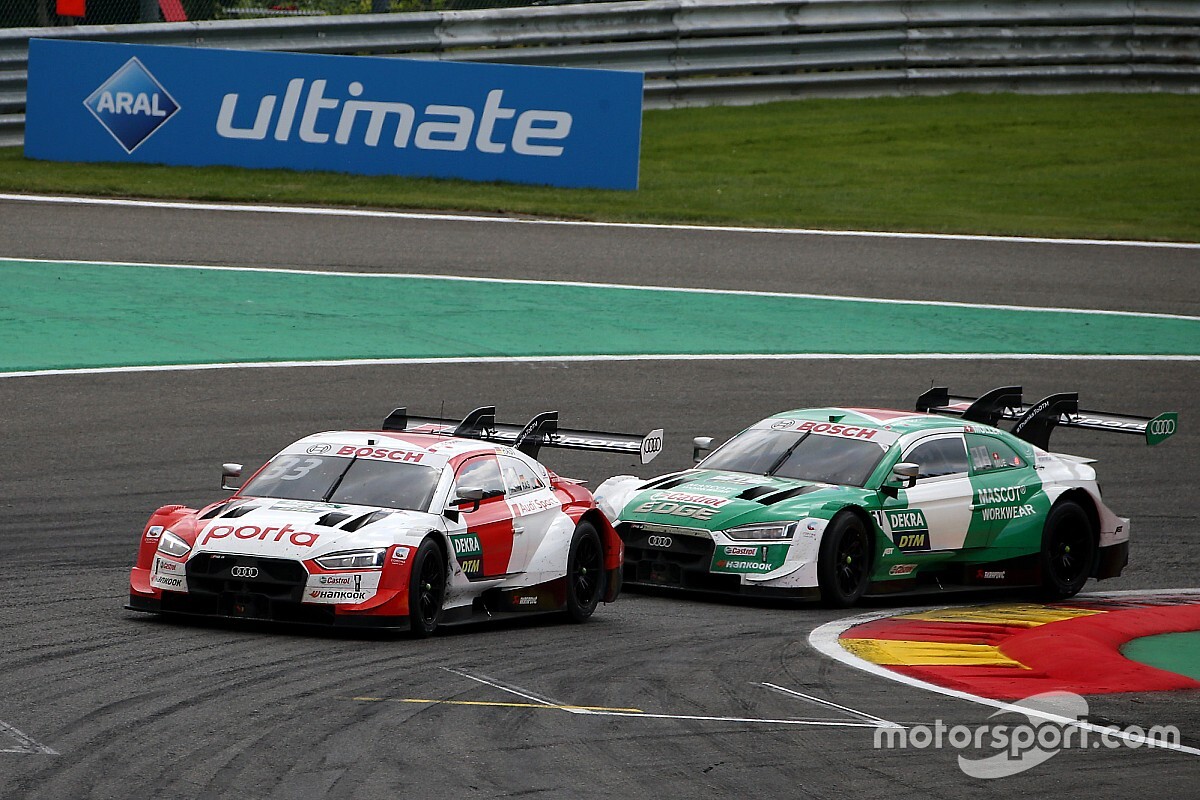 Audi driver Rene Rast has been summoned by the DTM over allegedly using the P2P boost in an illegal manner during the season opener at Spa Francorchamps Circuit earlier this month.

Rast faced a stern challenge from Nico Muller in the closing stages of the second race at Spa, but was able to fend off his Audi stablemate to take victory by a narrow margin of 0.483s.

However, onboard footage from the race showed Rast deploying push-to-pass to defend from Muller, even though the overtaking aid cannot be used by the driver that is leading the race.

Motorsport.com understands that Rast was able to take advantage of push-to-pass on laps 24 and 25 of the 26-lap race, with a connection failure between Malmedy and Bruxelles corners - which are farthest from the start/finish straight - likely to blame for the malfunction that allowed Rast to use the boost.

Because of the dead zone between the two corners, the system switches to a manual mode, which means the push-to-pass is no longer blocked automatically. Teams had been aware of this issue as early as Saturday morning of the race weekend.

Having reviewed the footage, the DTM has asked Rast to appear before the stewards this Friday, ahead of the start of the second round of the season at Lausitzring.

"The result of Sunday's DTM race at Spa-Francorchamps, Belgium, is not yet final," a statement from the DTM read.

"During the extensive examination of the vehicle data by the technicians of the DMSB in the days after the race it turned out that #33 Rene Rast had activated the push-to-pass system twice, although as the race leader he should not have used the system.

"The hearing of the case will take place on August 14th at 10:00 am during the next round of the DTM at the Lausitzring."

Audi admitted that Rast was able to use push-to-pass when it should have been deactivated for him, but insisted that the two-time champion instinctively pressed the button when the boost became available - and that the gain in performance was marginal.

"During DTM races, the availability of the push-to-pass system is signalled to the drivers via a green display," a statement from Audi read.

"During the DTM race at Spa on Sunday, Rene Rast experienced an error in the marshalling system.

"As a consequence, the system in the lead between turns seven and eight incorrectly signalled an active push-to-pass system to him in the form of the green signal.

"Rene then instinctively pressed the button and activated the system. After Audi Sport analyzed the data Rene requested the increased flow rate of the push-to-pass system for a total of 2.88 seconds.

"The effective time gain was 0.01 seconds. We ask for your understanding that we will not comment further on this matter before a meeting with the DMSB during the next DTM race weekend at the Lausitzring."

Although there have been calls for Rast to be disqualified from the race, a time-penalty is more likely, which would mean he would lose the victory to Muller. A fine for Audi remains an unfavourable option, as it would have little impact on a manufacturer of that size.

On the other hand, Rast could be acquitted of all charges if he and Team Rosberg boss Kimmo Liimatainen are able to provide evidence to support their cause.