Heavy rain lashed at the Austrian venue on Sunday morning prior to the 20-minute pole-shootout, compromising visibility and leaving plenty of standing water on track.

GruppeM driver Mikael Grenier crashed straight out of the pits on the newly-laid asphalt near Turn 2, with his Mercedes incurring so much damage in the incident that he had to sit out the race later on Sunday.

In all, qualifying was red-flagged three times following more incidents for Audi drivers Dev Gore and Ricardo Feller, with the final intervention bringing an early end to proceedings.

Bortolotti could only set the 23rd-quickest time in his Grasser Racing Lamborghini and felt the conditions had worsened to a point that qualifying turned into a session about “survival and not racing”.

"The fact that it wasn't aborted is one thing I don't understand," said the Italian. "How many more cars have to crash for it to be stopped?

"[It was] undriveable. The first two laps were bloody difficult. I've seen a lot of things, but I didn't like what happened this morning. We can't have that happening.

"I don't want to criticise anyone either, but I just didn't like it. The conditions have to be there for us to have racing and not survival.

"I like to race in the rain and I have often put the car on pole position in the rain. That's not what this is about right now.

“The situation that was there this morning compromised our whole day. We parked the car because we didn't want to have a crash. The problem wasn't in the corners, it was on the straights. Mainly to Turn 3."

Eventual race winner Thomas Preining also felt DTM shouldn’t have proceeded with qualifying, revealing he came close to crashing multiple times on his way to securing a spot on the fourth row of the grid.

Had the qualifying been cancelled, the starting grid would have been based on the championship order, as was the case at the Nurburgring in August when heavy fog forced DTM to abandon the session.

Asked for his assessment of the situation after Bortolotti’s remarks that qualifying should have been scrapped, the factory Porsche driver said: “I think so too. I was in quali two or three seconds behind a Ferrari in front of me and I had zero visibility.

“I had crazy aquaplanning and I almost crashed five-six times on the straight and it was almost undriveable.

“But also once again if you're P25 in the championship obviously you want to do a qualifying because if you start off the championship standings it is bad for you. So the situation depends for sure.” 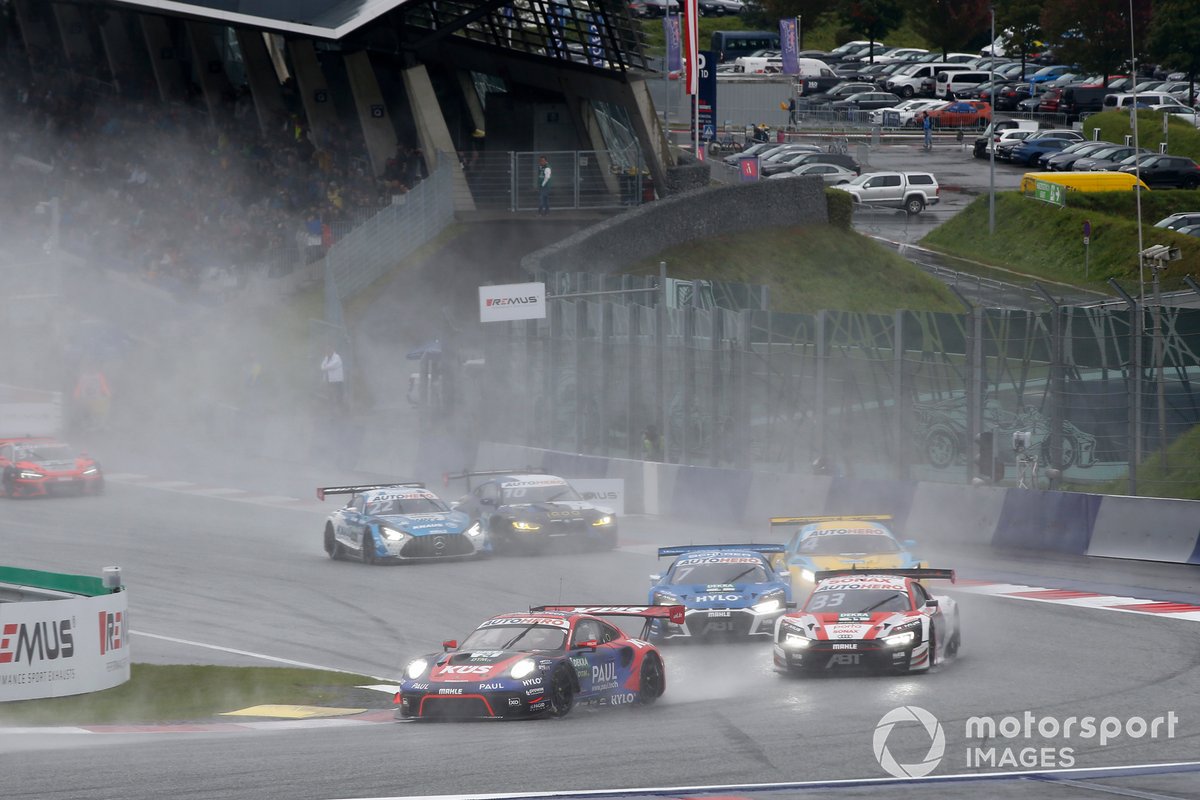 Maro Engel, on the other hand, offered a different view on the situation and felt that every driver deserved an opportunity to qualify for the race on merit.

The GruppeM Mercedes driver put in an impressive performance amid low-grip conditions to take pole by more than two tenths, and later scored his second podium of the season after a late-race charge on slick tyres in drying conditions.

“From my side I'd much rather have a qualifying like this morning than what we had at the Nurburgring,” he said.

“I don't think anyone wants the grid order set by championship order. I think it's only fair that every driver in the championship has a fair chance to qualify on pole position or his position.

Race director Scot Elkins admitted he considered ending qualifying early when it was red-flagged for a second time for an incident involving Gore, but felt there was enough time left on the clock to allow drivers to have one last shot at pole position.

“It wasn't until the second red flag that we started considering maybe we don't continue this,” said Elkins.

“We stopped with five minutes and 40 seconds to go and my thought was that is still enough time for everyone to get one lap in. And that's why we restarted because I thought it would be fair to let everybody have one chance.

“Unfortunately, the next red flag came with only one minute and 40 seconds to go and that's when we ended the session.”

Elkins felt that delaying qualifying wouldn’t have helped either as the rain was showing no signs of abating, and his decision was vindicated when a BMW M2 Cup support race had to be cancelled due to poor conditions

“The schedule doesn't matter. It's DTM. DTM has priority. That is not a problem," he explained.

“The thing for me was I was watching the weather and it didn't look like it was getting any better. So to wait wouldn't have really helped us because it would have been a long wait.

“You saw the BMW race got cancelled after our qualifying because the weather came.

"The idea was to try to get it in. So maybe I should have stopped at the second red flag, but like I said there was enough time for everyone to get one more lap and I thought they'd want that lap. So we kept going.”