The issue that put Robby Gordon and his team out of the 35th Dakar Rally was a compromised air filtration system.

El Salvador, Chile – Robby Gordon’s 10th attempt at Dakar Rally glory has come to an end in the sand dunes of Chile.

Despite earlier issues in the Rally with fuel vapor locking on the SPEED Energy/Toyo Tires HST Gordini, the issue that put Gordon and his team out of the 35th Dakar Rally was a compromised air filtration system. 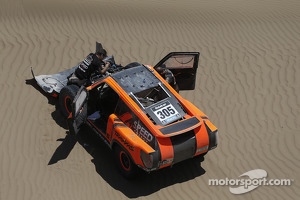 At the start of Thursday’s 11th stage, Gordon and navigator Kellon Walch raced only 18 kilometers into the stage when they realized the issue at the engine’s air intake and returned to Antofagasta, Chile to make repairs. Reports Thursday afternoon of issues with fuel contamination were denied by Gordon and he indicated the only problem was the air intake issue.

But in typical Gordon style, he and his team’s never-give-up attitude kicked in and they worked until 12 a.m. Friday with hopes of driving the HST Gordini and support trucks through total darkness in the desert in an attempt to make it to the start of the next stage within one hour after the last car left for Friday’s 12th stage. Despite their best efforts, and although repairs were made, time did not allow the team to make the 749-kilometer trek through the dunes to El Salvador in a timely fashion.

“We gave it our best and didn’t quit until the clock wouldn’t allow us to continue,” Gordon said.

“Without the vapor lock issues at the beginning of the Rally and a few other minor issues, the new HST Gordini ran really well and I was pleased with its performance. We will work on it for the next year and have a much better understanding of the car for next year’s Rally. I am very proud of the way everyone worked on Team Speed, and I appreciate the dedication and effort that everyone puts into everything we do.”

Speedbrain: On the way to the top ten