Reigning British Touring Car champion Ash Sutton took victory in a thrilling rain-affected finale to the opening round of the 2021 season at Thruxton.

Sutton, on wet-weather tyres, had lost the lead to the slick-shod Jake Hill, but as the rain once again intensified in the closing stages he was able to home in for the kill, and took the lead with two and a half laps remaining.

Sutton started his Laser Tools Racing Infiniti Q50 from third on the grid, but quickly got ahead of Tom Oliphant, who was on slicks, to take second.

Oliphant’s West Surrey Racing team-mate Stephen Jelley led the opening lap, but his BMW 330i M Sport fell prey to Sutton at the Complex on the second lap, and the other WSR BMW of Colin Turkington slipped past to grab second.

At this point Hill’s Motorbase-run MB Motorsport Ford Focus was down in 20th position, but as the circuit dried he began to scythe through the field.

By half-distance Hill was fourth, with fellow slick runner Oliphant following him through the field, and on the 10th lap of 16 the duo passed the helpless Sutton.

Then rain began to fall once again, and the race was just three laps too long for Hill. Sutton got ahead on lap 14 at Village, but Hill vainly attempted to fight back.

Then, on the final lap, the remarkable Hill was outdragged on the run to the finish line by the Power Maxed Racing Vauxhall Astra of Jason Plato, who completed a fine BTCC comeback with second place. 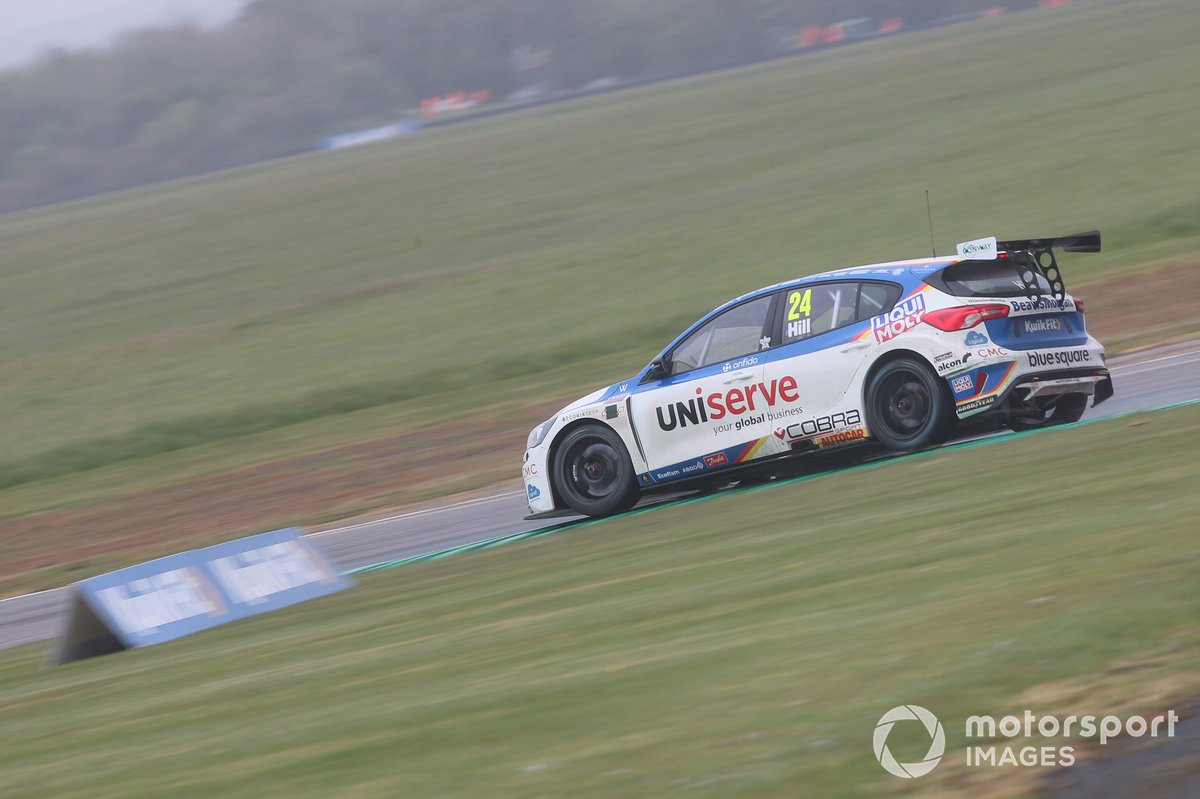 “We both went through the highs and lows of that race,” said Sutton of his and Hill’s performances. “We’ve had a bit of a rough day, but we got what we’ve deserved.

“It was phenomenal. You leave the grid on wets and think you’ve made the right choice, and then you think it was wrong. And then the heavens open again and it’s back in our favour.”

While Hill leaves Thruxton leading the championship, he almost certainly would have lost a place had the race run one lap longer to the superb Gordon Shedden. The Scot joined the grid late after problems were found on his Team Dynamics Honda Civic Type R following the second race, and started from the back, but he charged through to take fourth.

Oliphant was fifth on the road, but a five-second penalty for an out-of-position start dropped him to seventh behind Dan Lloyd’s PMR Vauxhall and Turkington, with the four-time champion fading as the race wore on.

It was a tough race for Josh Cook, the winner of the first two races. He started his BTC Racing Honda on slicks, but was hit with a 30s stop-go penalty for not having the tyres fitted at the prescribed time before the race.

The same fate befell Tom Ingram and his Excelr8 Motorsport Hyundai, with both Cook and Ingram visiting the pits later in the race for changes of rubber.