Toyota ace Tom Ingram made it two wins from two in the British Touring Car Championship round at Thruxton. 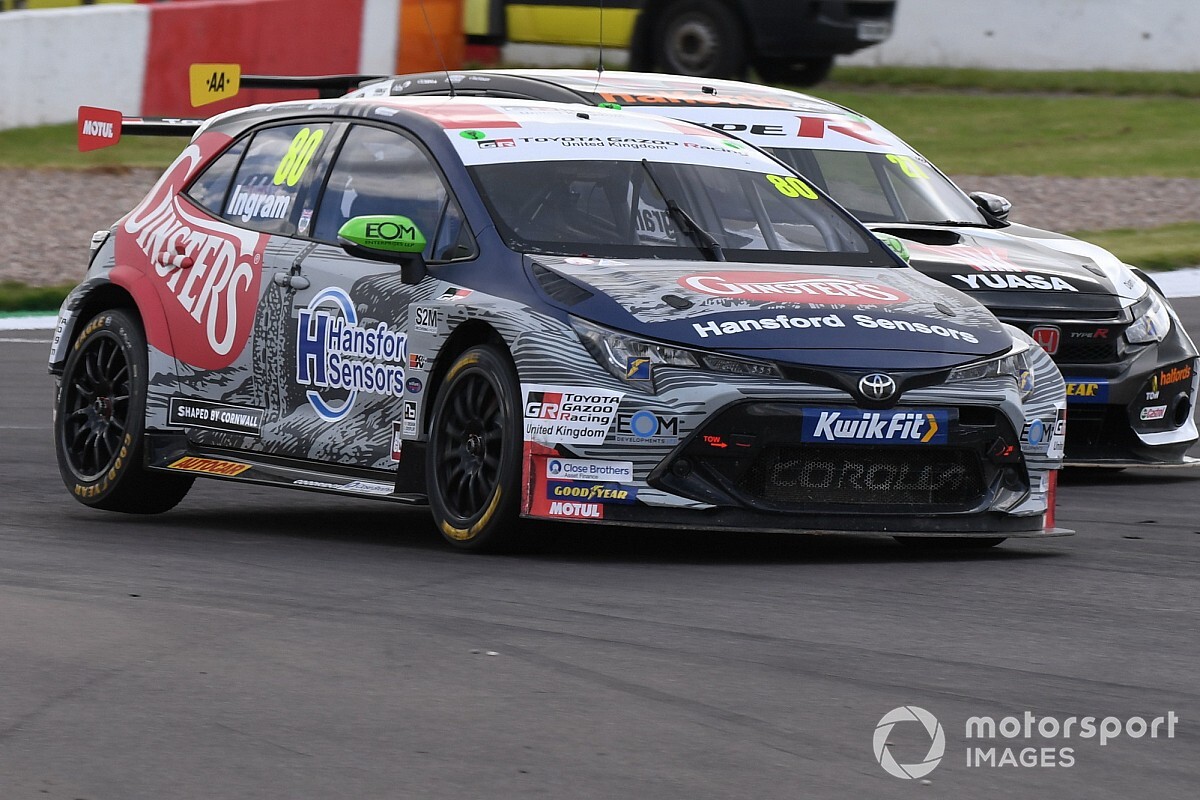 As he had in race one, Ingram kept his Speedworks Motorsport-run Corolla just out of reach of the Honda Civic Type R of Dan Cammish, despite this time carrying the maximum 60kg of success ballast from his earlier victory.

Cammish made a poor start from the outside of the front row, saying that he was lucky not to stall, and that allowed Team Dynamics stablemate Matt Neal into an early second place, as Ingram built up a huge 1.542-seconds margin on the opening lap. Neal, who said he knew Cammish was quicker than him, allowed his teammate ahead into the first corner on the second lap.

Cammish wasted little time in eroding Ingram’s advantage, and the leading Toyota was having to defend into the chicane at the end of lap five. Ingram then pulled the gap back out to over half a second, but with a lap to go he made sluggish progress through the chicane and now Cammish was right on his tail.

Ingram stayed firm on the final lap, beating Cammish to the line by 0.291s.

“I was probably changing the brake bias and front bar about four times a lap as the tyre life dropped away,” said Ingram, who added that he had an unwelcome bout of cramp in his buttock with a few laps remaining. “It was busy in there, but I know Dan is a class act and I could rest easy. If I made a mistake he would throw it down the inside, but if I didn’t I knew I was safe.”

Neal, outside the top three all season before Thruxton, was delighted to complete the second Dynamics 2-3 of the day, as the team runs a tweaked livery in deference to sponsor Yuasa’s 10th anniversary with the squad. Ash Sutton put Neal under pressure for most of the race in his Laser Tools Racing Infiniti, but the championship leader couldn’t find a way past as he extended his series lead with fourth.

Adam Morgan ran fifth for 12 of the 16 laps, only for the Ciceley Motorsport Mercedes to succumb to power-steering pump failure. That allowed Rory Butcher up to fifth in his Motorbase Performance Ford Focus.

As he had in race one, Tom Oliphant spent his time defending from an attack of BTC Racing Hondas – and this time it was all three of them swarming over the bootlid of his West Surrey Racing-run BMW 330i M Sport. Oliphant held on to take sixth, from Tom Chilton, Josh Cook and Michael Crees, and it is Cook who will start the reversed-grid race from pole.

Senna Proctor completed the top 10 in his Excelr8 Motorsport Hyundai i30, one place clear of Jake Hill, who charged his MB Motorsport Honda through from 22nd on the grid after his first-race puncture.

Pre-Thruxton championship leader Colin Turkington brought his BMW home 13th from 24th on the grid after his first-race electrical issue.