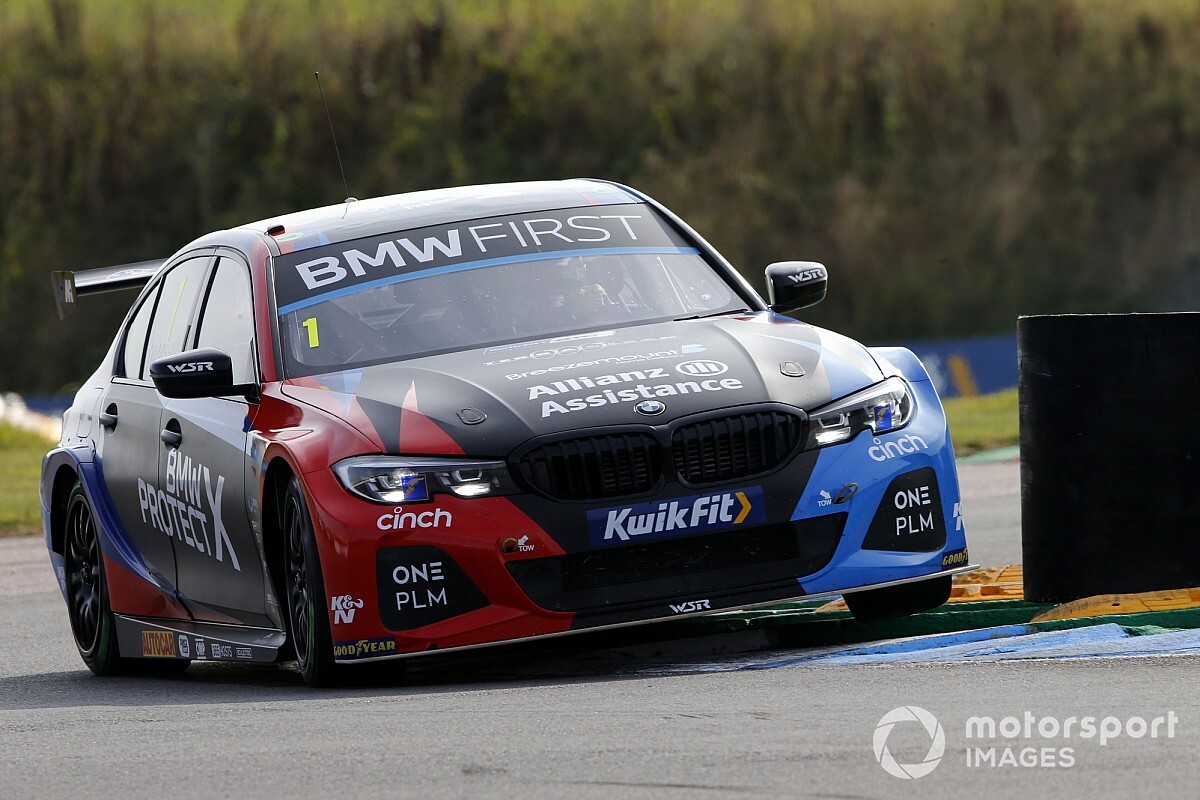 Colin Turkington battled through from an early fifth position to win a gripping second British Touring Car Championship race of the day at Silverstone and reclaim the points lead.

The four-time champion finished fourth in race one, so that’s where he started his West Surrey Racing-run BMW 330i M Sport from for the second encounter.

Turkington got passed around the outside of Copse Corner by pre-race championship leader Ash Sutton, but then Sutton locked up into Becketts and appeared to make contact with Rory Butcher, delaying himself and spinning Butcher to the back of the field.

Up front, Tom Ingram pulled off a superb move on polesitter Dan Cammish, around the outside of Brooklands before claiming the inside line for Luffield.

Cammish attempted to retaliate immediately on the second lap, running side by side with Ingram until the Speedworks Motorsport Toyota Corolla driver claimed the inside line for Becketts.

Ingram could not get away, and at one third distance the leading trio were forming a train, with Cammish’s Team Dynamics-run Honda Civic Type-R and Turkington immediately behind.

As the front tyres faded on the front-wheel-drive cars, Turkington was able to draw level with Cammish down the Wellington Straight on the 14th lap of 22.

That forced Cammish to defend through the end-of-lap complex, and Turkington was able to squeeze up his inside exiting Luffield, before completing the move to take second place at Copse.

That allowed Ingram to escape a little, but Turkington was closing when, with four and a half laps to go, Ingram ran wide at Becketts with a left-front puncture, forcing him into the pits.

“It was all about being patient,” said Turkington.

“I knew I had good pace, but I knew I had to wait on Tom and Dan coming back to me, when their front axles dropped off a bit.

“I did a nice move on Dan, and I benefited from the misfortunes of others – it’s a delicate balance where you’ve got to look after your left-front but you’ve got to be quick.”

Adam Morgan was close at hand to take third place in his Ciceley Motorsport Mercedes A-Class, while Matt Neal made it two Dynamics Hondas in the top four after emerging from a frantic battle that was initially headed by Jake Hill and Stephen Jelley.

Jelley’s Team Parker Racing BMW fell out of this during an incident on the 10th lap, while Neal passed Hill at half-distance.

Sutton fell into this scrap on the second lap, and had dropped to 10th with six laps remaining when the left-front tyre punctured on his Laser Tools Racing Infiniti, sending him to the pits.

Sutton rejoined two laps down, and nicked a point from Cammish on the final tour when he set the race’s fastest lap.

While Sutton toiled, his LTR Infiniti teammate Aiden Moffat put in his best race of the season to claim fifth from Josh Cook’s BTC Racing Honda and the MB Motorsport Civic of Hill.

Ollie Jackson was eighth in his Motorbase Performance Ford Focus, while Turkington’s BMW teammate Tom Oliphant charged through to ninth from 25th on the grid – and got drawn on pole for the reversed-grid race.

The final spot in the top 10 went to Senna Proctor’s Excelr8 Motorsport Hyundai, while Butcher progressed to 14th following his first-lap drama.