Rick Hendrick on Kyle Larson's No. 5: "I love that car"

Kyle Larson’s 2021 NASCAR Cup Series championship is the 14th for team owner Rick Hendrick and each has been special in its own right – but Sunday’s a little bit more so.

For one, it came with the No. 5 team. Hendrick Motorsports debuted in 1984 under the banner “All Star Racing” with the No. 5 driven by Geoff Bodine. Running all 30 races, Bodine and the team won three times and finished ninth in points.

HMS has used the No. 5 on and off throughout the organization’s existence.

The last time the No. 5 had won a Cup Series championship was 1996, which was the second series title by then-Hendrick driver Terry Labonte – 25 years ago.

“We kind of parked the No. 5 when Dale (Earnhardt Jr.) wanted to run the No. 88. When we brought it back, it was very special because it was our first number,” Hendrick said. “Mark Martin did a heck of a job in it. He had a shot at a championship. Terry did an unbelievable job.

“I don’t think we’ve probably given the No. 5 a chance. But any time you have your first number and it’s got such a history with the family, it’s special.”

The No. 5 also had an association with team owner Rick Hendrick’s late son, Ricky, who drove the No. 5 in what is now the Xfinity Series in the 2002 season, which turned out to be his last as a driver.

Larson’s No. 5 was adorned much of the 2021 season – including in Sunday’s race – with a HendrickCars.com livery which includes a paint scheme similar to one Ricky Hendrick used in his NASCAR career.

“I think my wife and I, when we watch that car race, it just does something to us, paying tribute to our son, the number, the colors,” Hendrick said. “Then, Hendrick Cars got on it, and they got so excited about it, and we were getting ready to do another sponsorship, but they wanted the car.

“The whole company, it just means so much to them and our organization and the automobile side. I love that color. I love that car.

“So, it’s very, very special to be able to win that and celebrate his colors, his number and his life.” 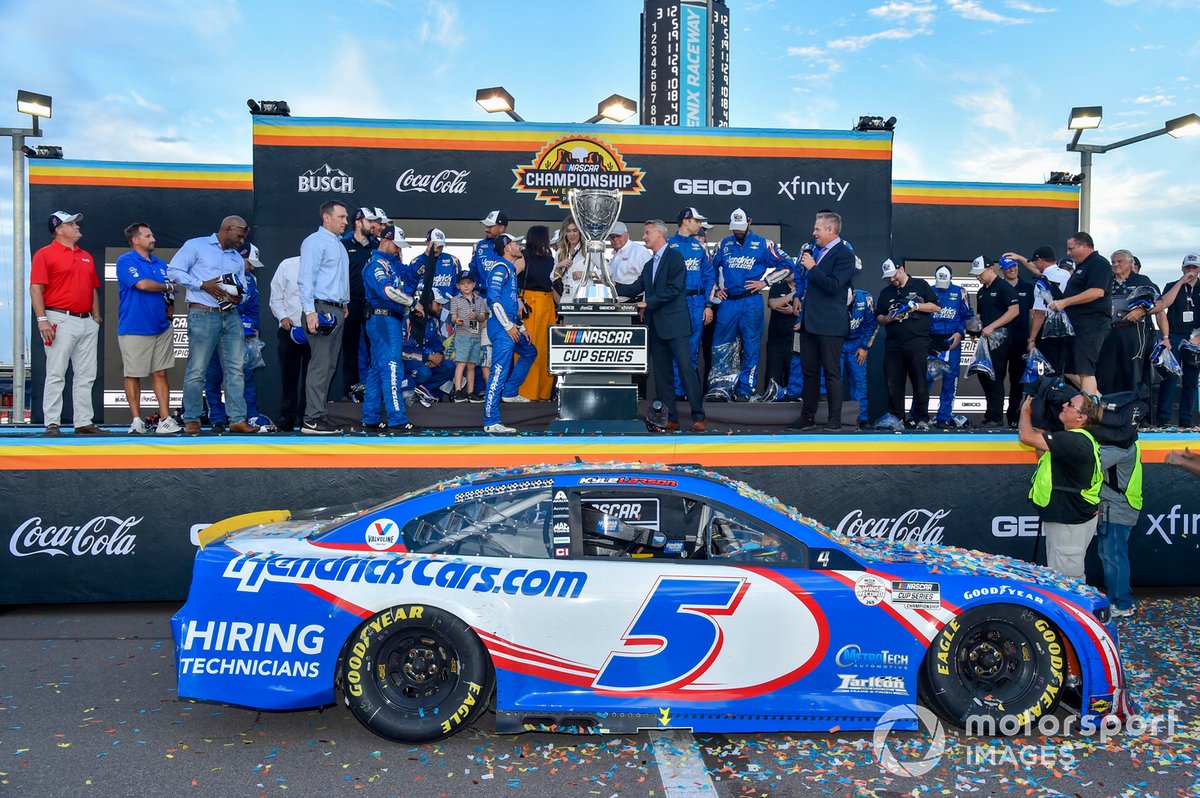 Ricky Hendrick, 24 at the time, was one of 10 people killed in the Oct. 24, 2004, crash of an HMS plane into mountainous terrain in Stuart, Va., prior to a Cup race scheduled that day in Martinsville, Va.

Ricky had retired from driving in 2002 and was listed as the owner of two teams at the time of his death – Brick Vickers’ in the Cup Series and Kyle Busch’s in what is now the Xfinity Series.

“Everybody in motorsports was really excited about bringing (the No. 5) back, and then the colors and all,” Hendrick said.

“I think there will be some more championships with the No. 5 car.”