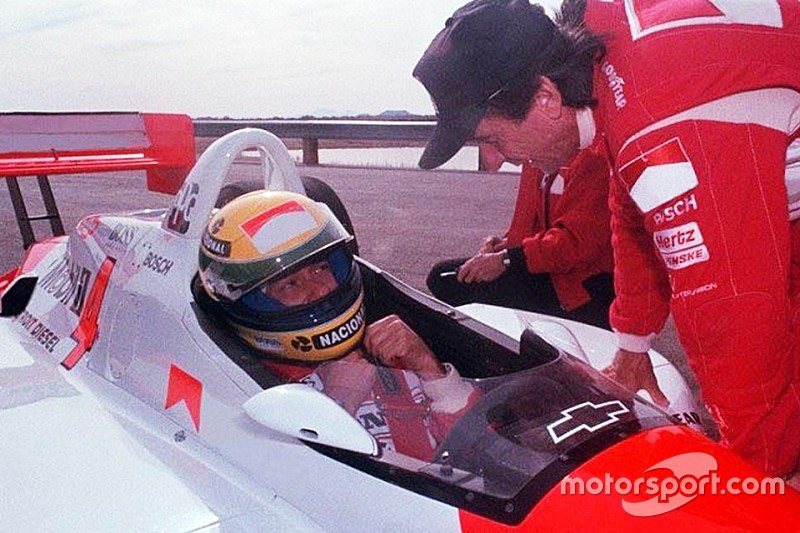 Ayrton Senna knew that the 1993 F1 season was likely to end in massive disappointment.

His McLaren team had lost Honda engines, and the triple champion knew customer Ford power would be impotent against the Williams-Renault of his arch rival, Alain Prost.

Senna was pondering his options, and wanted to feel what an Indy car was really like – a car without all the electronic gizmos that characterised F1 machinery in the early 1990s.

Nigel Beresford, today the technical Director of Dragon Racing in Formula E, had acted as Senna’s engineer that day, - and he recounted the story of what had unfolded on December 10, 1992.

“We had planned to test the new Penske PC22 for three days," Beresford told Motorsport.com.

"The first one was to be held at Firebird Raceway West, a very short 1.1-mile road course. We had a 1992 Penske to use as a comparison car and as a baseline."

A few days before the test, an agreement was reached through Emerson Fittipaldi and Marlboro for Senna to drive the '92 car.

"The last time I had seen him was at the 1991 Australian Grand Prix in Adelaide. To see someone like him in such an ordinary place a year later still seemed surreal."

Emerson Fittipaldi started the day by driving the '92 Penske. “It was cold and the track was slippery," he said. "Emmo spun on cold tyres, but eventually found the car pretty well balanced and just lacking overall grip.

"He came in, we changed tyres, and adjusted the brake balance a bit more towards the rear. He completed a 12-lap run and a 13-lap run, setting a best time of 49.7 seconds twice."

After a short break, Senna slid into the narrow cockpit of the Penske Indy car.

“Normally, Formula 1 drivers get on the pace immediately," said Beresford. "Ayrton started doing some pretty slow laps initially, and that was a surprise.

"This car had a sequential gearbox and Senna had to get used to manipulating a gear shifter again. On occasion, he would lose his way through the gears. He would stop the car completely, select first gear and then go again.

Ayrton Senna had to get used to the characteristics of a turbo car. After completing 14 laps, he came back into the pits with a best lap of 49.5 seconds.

“He told me the engine was very drivable, and found the car pretty heavy - not as nimble as a much lighter F1 car - and added he did not know the revs he was pulling because the engine sounded so different," added Beresford.

"Firebird has one moderately quick corner, and Senna was just starting to push the car through that corner. He could feel the weight of the car; he did not want to push it to the limit. It was not the place, nor the time to do it.

"He wanted to see the sensitivity of the car, so we put softer springs at the rear, disconnected the rear anti-roll bar, and added 20 gallons of methanol."

The three-time World Champion did another 10-lap run on the same set of tyres, and set a best time in 49.09 seconds.

“He came back into the pits and said 'Thank you very much, I've learned what I need to know.' He got out of the car and that was that,” Beresford continued.

“Senna did not disappoint me at any level. He was just amazingly quick. Emmo’s best lap was a 49.7 compared to Senna's 49.09.

"At the end of the day, Emerson did a 48.5 in the new Penske, and that was just 0.6s quicker than Senna. That was very good considering Ayrton was driving a year-old car on old tyres.

"To me that indicated just how extraordinarily quickly he was able to adapt himself and approach competitive times."

KVSH Racing plan for just one full-time car in 2016