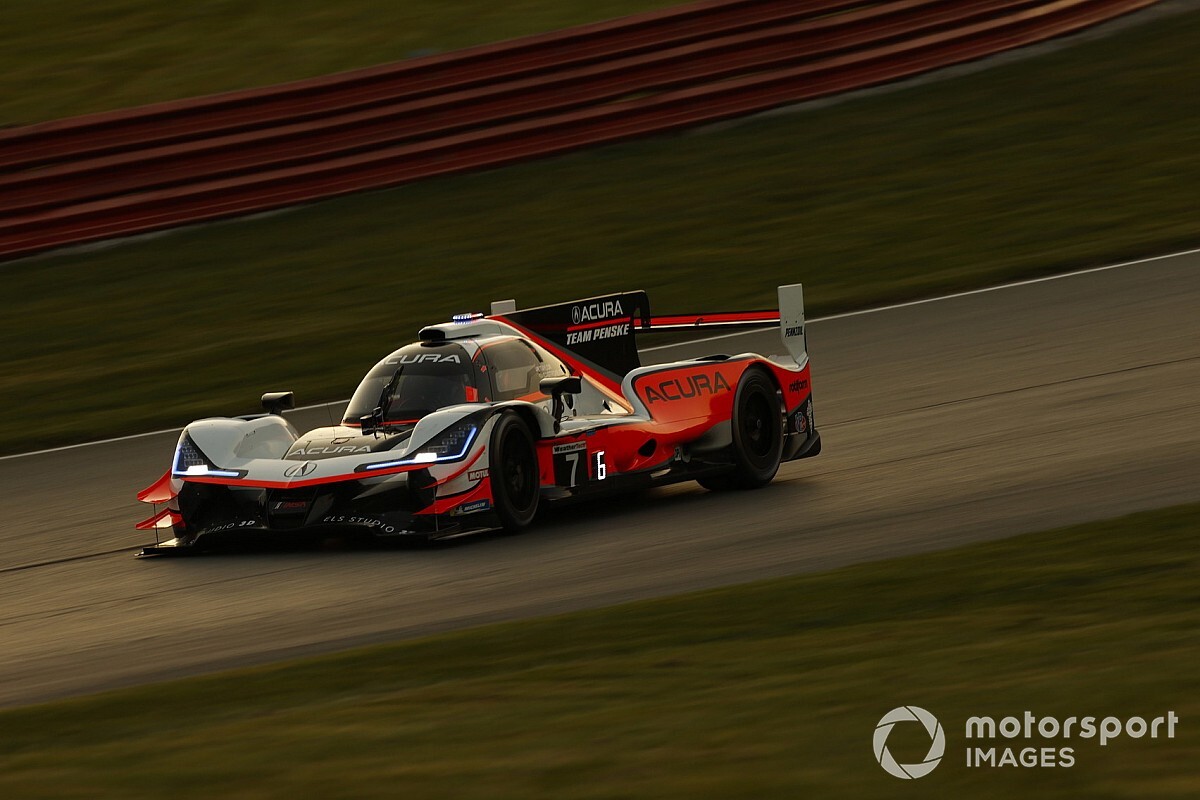 Collisions involving the hitherto dominant #6 Acura and the #77 Mazda have turned the Prototype order on its head halfway through the 23rd running of Petit Le Mans at Road Atlanta.

An early and short sixth stop for the Action Express Racing Cadillac DPi V.R, and a charging drive from Felipe Nasr, put the Whelen Engineering ahead of the Acura #6 driven by Simon Pagenaud, which spent the next stint trying to catch the Caddy, but also hold off Tristan Nunez in the #77 Mazda RT24-P, the pair covered by just two seconds.

However the caution flag flew for only the second time just past the four-hour mark when Rob Hodes fell off the track in the LMP2 Inter Europol Competition Oreca, although the Polish car was able to get going again unaided.

Into the pits they trailed, Nasr ahead and remaining onboard, while Pagenaud handed back to Dane Cameron. After servicing, Cameron reached the pit exit just in time for Nasr’s AXR Caddy nip in front. However, since Nasr had been in the slow lane at pit exit, he was ordered by Race Control to drop behind the #6 Acura, and right in front of Nunez’s Mazda. Fourth was the WTR Cadillac of Renger van der Zande which had been in danger of going a lap down in the previous stint but had now been jumped ahead of the #7 Acura, which Rossi handed over to Ricky Taylor.

As half distance approached, the Prototypes made their eighth pitstops, and as Oliver Jarvis emerged from the pits having taken over the #77 Mazda, he made contact with Alessandro Balzan’s GTD Ferrari, which sent him back to the right and made hard contact with the right wall. Jarvis then limped the car back to the pits and went behind the wall.

Somehow leader Cameron got involved too – perhaps with an LMP2 machine – and went off the track. The subsequent yellow saw Cameron drive back to the pits for a new nose section and fell to fourth.

The sister Acura of Taylor thus took over the lead ahead of WTR’s Cadillac, now driven by Ryan Briscoe, with Pipo Derani third in the AXR Cadillac, Tristan Vautier in the #5 JDC Miller Motorsports Cadillac ahead of Cameron.

Augusto Farfus was able to continue Jesse Krohn’s fine work in the previous two stints to continue leading GT Le Mans in the #24 BMW M8, but after the second yellow of the race and the pitstops that followed, Corvette Racing jumped Nicky Catsburg in the #3 C8.R ahead of the two Porsche 911 RSRs of Mathieu Jaminet and Matt Campbell. However, following the restart, Campbell would fall behind Oliver Gavin’s #4 Corvette and John Edwards who’d taken over from Farfus but had suffered a long stop due to right-rear wheelchange trouble. A collision at Turn 10 between Campbell and Edwards saw them both half spin but didn’t stop Edwards from taking third from Gavin who had been embroiled in the mess, and according to IMSA Radio sustained right-side diffuser damage and lost a lot of pace.

Just before half distance, a failed overtake by Jaminet on Catsburg’s Corvette allowed Edwards to steal past into second. Then the third yellow of the race sent the field into the pits, with Edwards now leading Catsburg, with Jaminet third ahead of Fassler (taking over the #4 Corvette from Gavin) and Tandy.

During the class’s fifth stop (six for Paul Miller Racing’s off-strategy Lamborghini), AIM Vasser Sullivan jumped its #12 car driven by Townsend Bell ahead of the #86 Meyer Shank Racing Acura NSX of Shinya Michimi, with Alessandro Balzan Scuderia Corsa Ferrari 488 in third ahead of the PMR Lambo of Bryan Sellers, Alvaro Parente in the Heinricher/MSR Acura and Ian James in the Heart of Racing Aston Martin Vantage.

With 5h30m to go, Balzan took second from Michimi and then set the class’s fastest lap to draw within half a second of Bell. The third yellow of the race caused by Balzan’s collision with the Mazda Prototype, saw Sellers stay out, ahead of Frankie Montecalvo who’d taken over from Bell, Michimi, Balzan, Trent Hindman in the Heinricher MSR Acura and Jan Heylen back in the Wright Motorsports Porsche 911 GT3 R.

He ran just ahead of Pfaff Motorsports’ similar car, driven by Zacharie Robichon, which had needed to go off strategy earlier with a puncture.