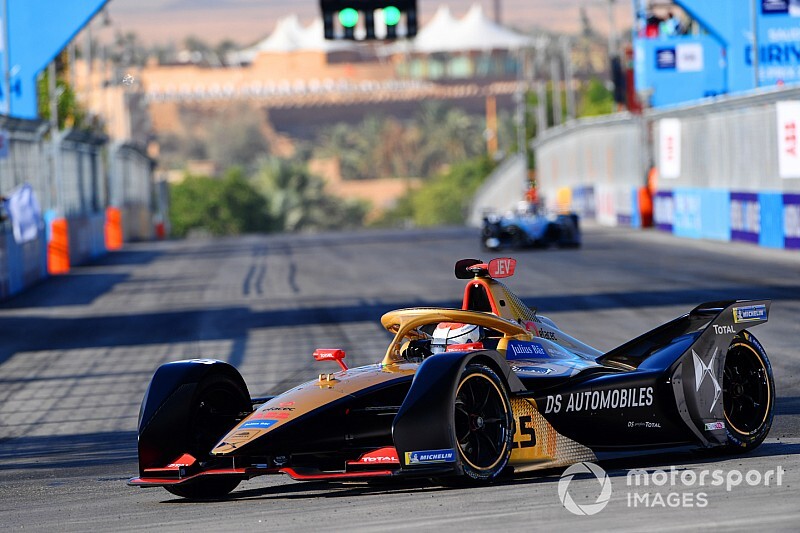 Reigning Formula E champion Jean-Eric Vergne says it was a “miracle” he could score points in the second Diriyah E-Prix race after a “mega harsh” penalty dropped him to the back of the grid.

Vergne crashed into the wall at Turn 17 in Saturday’s sole practice, suffering suspension damage to his DS Techeetah.

Although the team was able to repair the damage in little time, FIA’s official supplier McLaren Applied Technologies was forced to change the battery on his car, prompting a 20-place grid drop.

With Vergne unable to serve the sanction in full, he was hit with an additional 10-second in-race stop-go penalty that firmly left him dead last in the pack.

But the 29-year-old was able to charge his way through the field to finish 11th, which became eighth after Maximilian Gunther, Nyck de Vries and Oliver Turvey were all penalised post-race for separate infractions.

“I was just cruising around, saving energy,” Vergne who was speaking before the penalties were announced, told Motorsport.com.

“Then [second] safety car came and I went from 17th or 18th to 11th in four laps. I done two laps in a row, [passed] two guys in the same corners. So, it was maximum attack and I had fun doing [it].

“Considering today, I think it would be a miracle [to score points, which Vergne did after the post-race penalties were applied].

“You have to accept this. It's Formula E, it's extremely difficult.

“A lot of things can happen, as we saw this weekend. Obviously, you know what should happen will always happen together.”

Vergne also endured a difficult first leg of the Diriyah weekend, the Frenchman suffering a DNF after his steering wheel rack broke midway through the race.

“[On Friday] I did the pole of my group,” he said. “Race one I was coming back up, steering wheel rack broke.

“[On Saturday], you know my mistake [in practice], which was ok, not messy, because the car was fixed in 15 seconds but then McLaren wanted us to change the battery so that didn't give us time to [get out again].

“And in qualifying I had a car with one wheel like this, the other one like that. So I was not really steering straight but I still managed 11th.

“And then this unreal penalty came. I mean unreal. I'm not complaining, it's the rule but I find it extremely harsh that, you know, I got jumped to the back and then I have to stop and go 10 seconds. [Penalised] twice. It's mega harsh.

“I mean for people caught cheating in qualifying, they don't get a penalty as bad as mine and mine it was just a safety reason why we changed the battery.

“I mean, it is what it is. Not much to say. Just some positives. The car was very quick today in the race and season is very long. and very motivated to get back on top.”