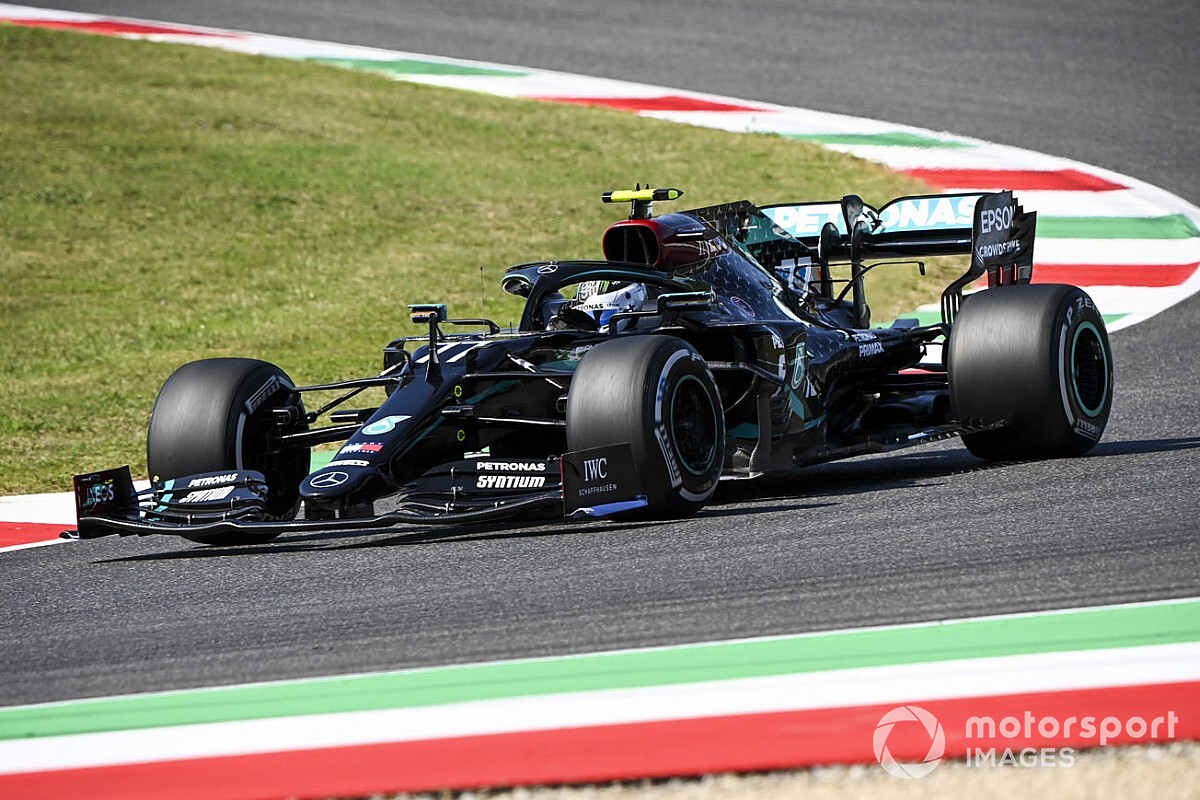 Both Ferrari cars had spins in the third sector at what is the squad's own track, but it was Lando Norris's crash just before half distance and Sergio Perez tagging Kimi Raikkonen late on that caused the two stoppages.

Under clear skies and strong sun, the F1 field continued to find the limit at Mugello – where Norris' off led to the first disruption of the weekend.

The McLaren driver had just begun a flying lap on the soft tyres approaching the 40-minute mark in the 90-minute FP2 session when he had to correct a slight moment of oversteer running through the third corner – Poggio Secco.

This put Norris fractionally wide on the exit and as his wheels dipped into the gravel beyond the outside kerbs his car snapped left and he speared into the wall on the outside, knocking off his front wing.

The session resumed after a near 10-minute delay for this incident, after which Norris did not return to the track, where Bottas had already claimed the top spot during his early laps on the medium tyres with a 1m18.019s after Norris had led the initial running with a 1m18.685s – also on the yellow-walled rubber.

The Mercedes drivers took the restart on the softs and moved to lower the benchmark, with Bottas leading Hamilton around the 3.25-mile circuit.

The Finn set the fastest times in the first and second sectors on his way to the session's fastest – a 1m16.989s – with Hamilton taking the fastest time in the final sector but ending up 0.207s adrift.

The Red Bull drivers slotted into third and fourth, with Max Verstappen's best time on the softs coming in 0.246s slower than Bottas, while his teammate Alex Albon ended up a further 0.736s behind on a 1m17.971s.

The top four were the only drivers to get under the 1m18s bracket during the qualifying simulation runs, after which the rest of FP2 was dedicated to long-run data gathering as per usual.

This was interrupted by a second, much shorter, red flag that was caused when Perez exited the pits with just under 15 minutes remaining and tagged Raikkonen's left rear as the Alfa Romeo swept into Turn 1 ahead of the Racing Point.

The clash sent Raikkonen off backwards beyond Turn 1 – although he was able to return to the pits – and broke Perez's left-front front wing endplate off, which meant the session was stopped again so the debris could be recovered.

The incident will be investigated after the session.

Daniel Ricciardo set his best time just before the Norris red flag, and he held on to fifth after majority of the pack completed their qualifying practice after the first restart.

Ricciardo's Renault teammate Esteban Ocon slotted into sixth at this point, and he finished ahead of Perez, Monza winner Pierre Gasly and Raikkonen.

Charles Leclerc took 10th for Ferrari after spinning off going through the long right of Correntaio just before the 15-minute mark.

He lost the rear of his near-maroon liveried SF1000 following a slowly touring Alfa Romeo through the turn and went off backwards before gathering things up and continuing.

Lance Stroll was 11th for Racing Point, ahead of Sebastian Vettel – who also spun at Correntaio, but further around the turn compared to Leclerc.

Vettel's off happened just past the one-hour mark as he also suddenly lost the rear of his car, sliding sideways across the inside of Biondetti 1 before carrying on.

Vettel then reported "the engine stopped" on his final lap back to the pits at the end of the session and he pulled over on the inside of Biondetti 2.

Norris finished 14th in the final standings, with just nine laps on the board and his best lap staying as his early effort on the mediums, while Romain Grosjean brought up the rear of the field and completed just five laps as Haas was forced to inspect an electronics problem on his car.