Lewis Hamilton won the Turkish Grand Prix for Mercedes at Istanbul Park, round 14 of the Formula 1 World Championship, to claim his record-equalling seventh world championship in a chaotic wet race. 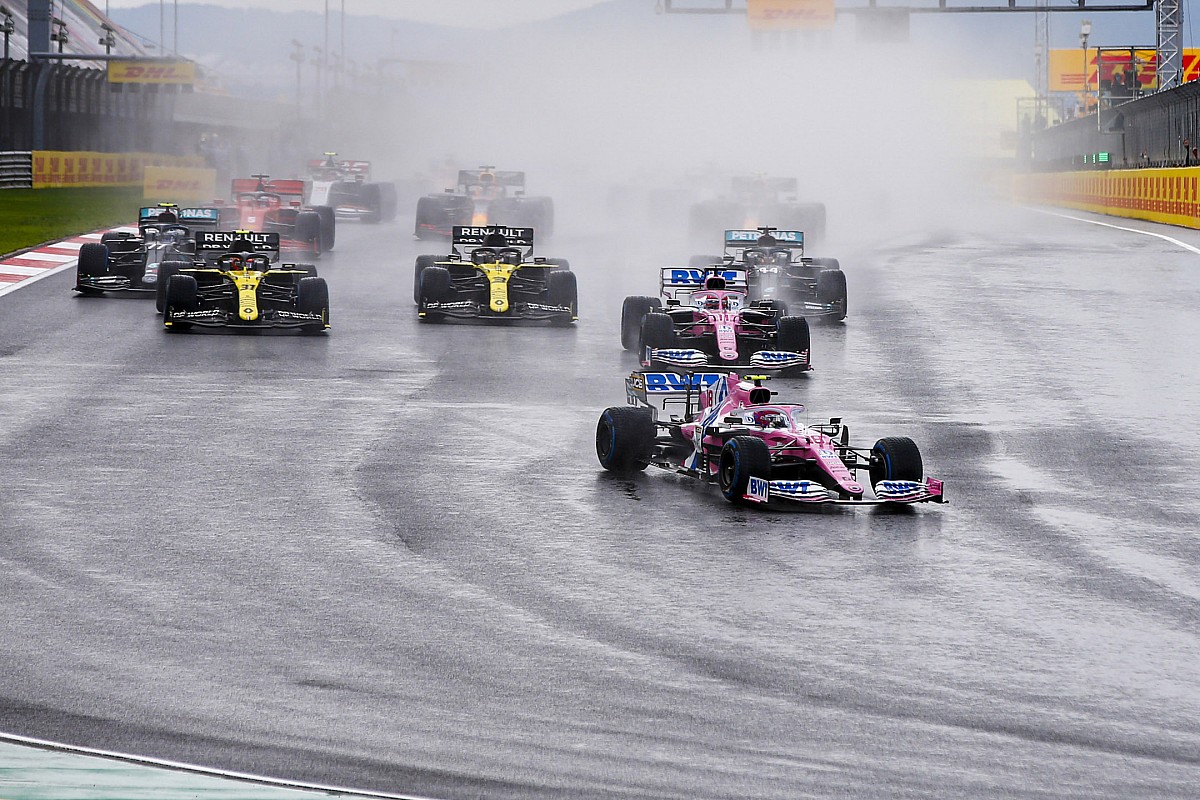 Lance Stroll led from pole ahead of Sergio Perez in a Racing Point 1-2, as Esteban Ocon – hit by teammate Daniel Ricciardo – and Valtteri Bottas spun off at Turn 1. Hamilton jumped up to third from sixth, but went off at Turn 12, and dropped back to sixth. Meanwhile, Bottas suffered a second spin on the opening lap.

Red Bull’s Max Verstappen made an awful start from the front row, but worked his way back to fourth, hounding Ferrari’s Sebastian Vettel in the opening stages.

Charles Leclerc (Ferrari) and Bottas were early adopters of the intermediate tyre, both having dropped towards the rear of the pack. Vettel pitted for inters on Lap 9, freeing Verstappen to chase the Racing Points.

Stroll stopped to switch to inters on Lap 10, which handed the lead to Perez for a lap before he too pitted, promoting Verstappen to P1. Verstappen stayed out for two more laps, and lost time in his stop as tape was removed from his brake duct, rejoining right behind Perez, who also suffered a slow stop, but ahead of Vettel and Hamilton.

Hamilton attacked Vettel for fourth, but ran wide – complaining about his brakes – and dropped behind Albon, who also then passed Vettel.

Verstappen attacked Perez but suffered a wild spin after he ran wide, and was forced to pit again for new tyres, which dropped him from third to eighth. Albon then stepped up for Red Bull, and took the fight to Perez – and both of them slashed into Stroll’s lead – but Albon spun out of third place at Turn 4.

Hamilton took the lead on Lap 37, after Stroll pitted for a second set of inters, and Lewis passed Perez on track. Stroll – who had dominated the race until now – had no pace on his new set of inters, then became embroiled in a battle with the Ferraris of Vettel and Leclerc, who surged ahead to run fourth and fifth. Albon and Carlos Sainz (McLaren) also passed him, dropping Stroll to eighth.

Hamilton’s choice to stay on a set of intermediates for the majority of the race proved to be the winning strategy, which was mirrored by Perez in second. Vettel was the first of the two stoppers, passing Leclerc in the final corners after Charles outbraked himself while trying to lunge past Perez, with a charging Sainz in fifth. The Red Bulls were next up, with Verstappen finishing ahead of Albon despite another spin.

Lando Norris set fastest lap on his way to eighth, passing the beleaguered Stroll with two laps to go.

Bottas suffered a woeful race, spinning numerous times on his way to 14th, and was lapped by Hamilton with 12 laps remaining.

Vettel: Slicks could have given Ferrari victory shot