Mercedes keeps pushing the boundaries despite having a car that is the class of the F1 field. Giorgio Piola looks at the latest innovation introduced by the German squad to improve tyre performance.

There has been no better illustration recently of the need of Formula 1 teams to get tyres into the perfect operating window than what happened to Mercedes in Singapore.

Despite a car that is clearly the class of the field, Lewis Hamilton and Nico Rosberg were powerless around the Marina Bay circuit to find the speed from their rubber.

Failure to manage properly both the surface and core temperature of the rear tyres – on a weekend when Sebastian Vettel and Ferrari got it spot on – was widely believed to have been a key factor behind its race to forget.

Let's not forget also that the need to manage the tyres has become even more critical in recent races too, ever since fresh restrictions were laid down by Pirelli on what teams could do to their rubber prior to the cars hitting the track.

This has included enforcement of minimum tyre pressure and camber settings, but also limits on how much the tyres can be heated in the blankets beforehand.

There is now no way teams can overheat the tyres in the blankets to ensure that, once they have started to cool down on the car, they are still in the perfect temperature/pressure operating window for maximum performance as the car hits the track.

The new limits put the tyres into an area where they do not perform as well as if teams were given free rein on the parameters.

That is why extra efforts now appear to be going on to find ways to help keep tyres in the right operating window without going outside of the Pirelli restrictions.

One avenue that is now being exploited is to get extra temperatures into the tyres through the heating of brakes prior to the tyres being put on the car.

Having super-heated brakes when the tyres are fitted would in theory lift the core temperature of the tyre, and help get them in to a zone that the teams want.

The extra heat transferred through the rim could also temporarily lift the pressures when the tyres are first fitted, to help them get above the limits when checked by the FIA.

Then, when the temperature drops away, the pressure can drop nearer an area that delivers the ultimate performance. 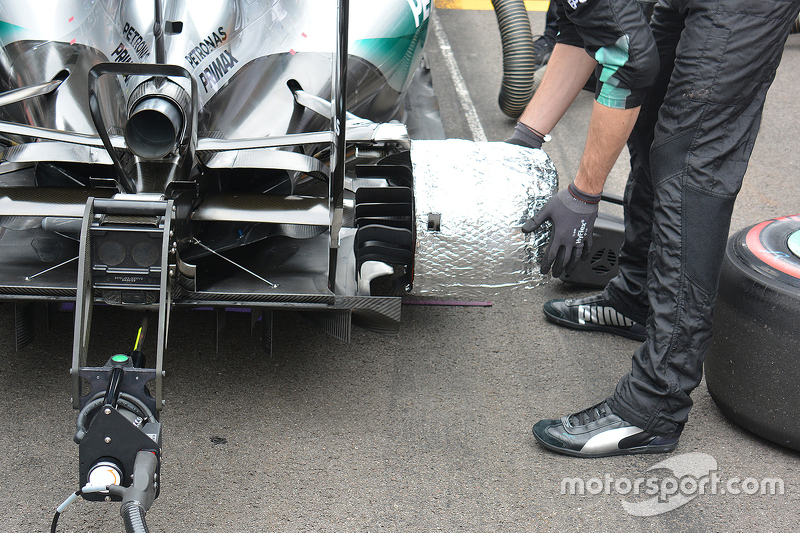 It is interesting that in the last two races Mercedes has been spotted using a heated blanket system on its rear brakes prior to the cars hitting the track.

Our exclusive photographs from Russia show it being fitted in both the garage and on the grid.

Having the tyre temperatures managed so well like this could also explain why, on the formation lap in Russia, Nico Rosberg and Lewis Hamilton appeared so confident to crawl to the grid prior to the start.

Many believe their holding back so much was a bid to get the tyres of rival Ferrari to drop outside of their comfort zone, either with dropping temperatures or dropping pressures.

F1 engine development and year-old engines back in play

Magnussen insists he is not giving up on F1