Renault is evaluating a switch to the Mercedes concept of a split turbo and compressor on its Formula 1 power unit as part of an engine overhaul for 2022.

Last year, the French car manufacturer elected to delay the introduction of a new engine to 2022 as a consequence of the coronavirus pandemic.

It means it is using just an upgraded engine for this season, but that has given it extra time to evaluate wider scale changes for next season.

One of the ideas being looked at is adopting the design that Mercedes pioneered in F1, of splitting the turbo and compressor elements of the power unit.

Ever since the turbo hybrid era started, Mercedes elected to split the two elements so they were either side of the internal combustion engine. They are joined by a connecting shaft that runs between the inside of the V-bank.

The benefits of the design are much better packaging opportunities, which has advantages for both weight distribution and aerodynamics.

Japanese manufacturer Honda adopted the Mercedes design idea for 2017 as part of a revamp of its efforts, while Ferrari is also understood to be considering going down that route for 2022.

Now Renault has revealed that it too is looking at the idea – and recent images of Fernando Alonso visiting Renault's Viry engine facilities hinted at it having already tried out the split turbo idea on its dyno facilities.

The images from Viry appeared to show the airbox pipework (highlighted in photograph) feeding down in to the compressor, which was situated at the front of the power unit rather than the rear as it is on the current Renault engine. 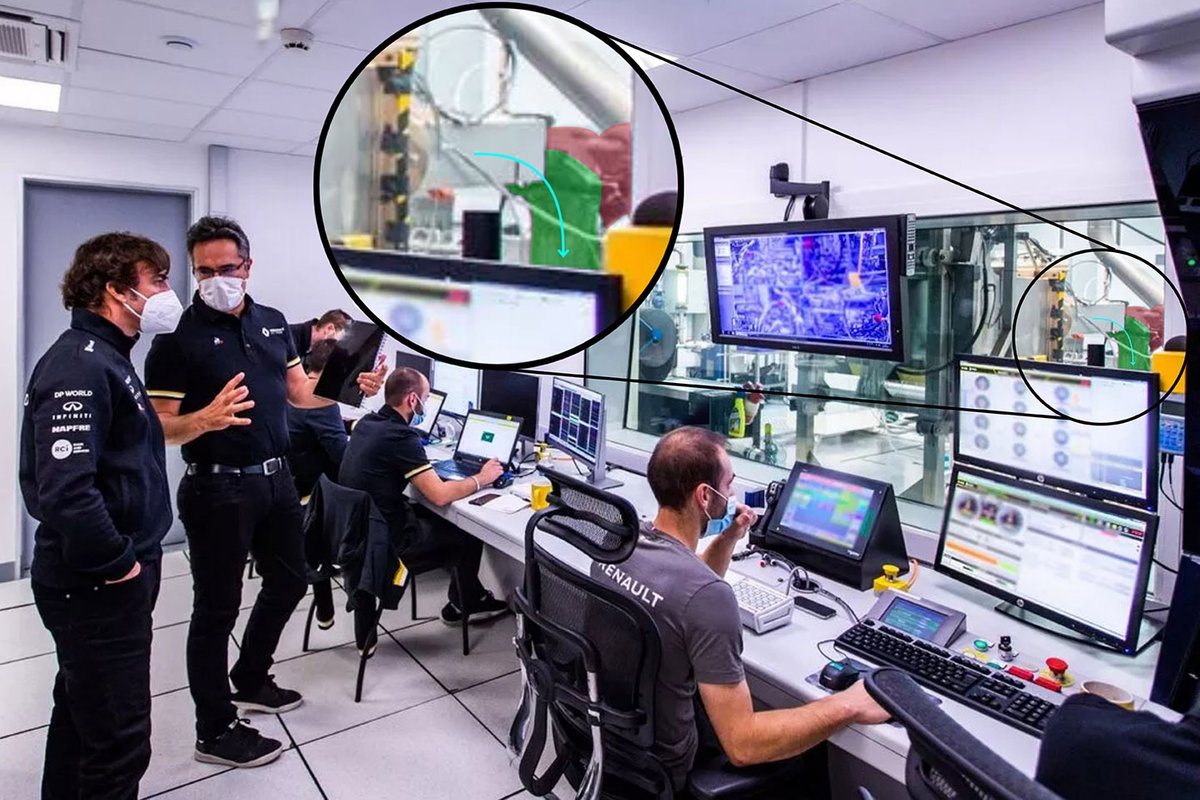 Renault F1's engine chief Remi Taffin confirmed on Wednesday that such a change of concept was on the cards.

"The simple answer is yes," he said.

When asked by Motorsport.com to clarify if it was likely to happen, Taffin said: "We could be going down that route….I'm pretty sure you've seen some photos, so I'm not going to lie. We are evaluating."

Renault says this year's engine, which will run in the back of the Alpine car, features modifications that were originally planned mid-season in 2020 prior to things being frozen because of the pandemic.

Taffin added: "We implemented the modifications we did [originally] forecast for mid season last year into this year. So it's more of an evolution that we would have in-season rather than over the winter."