Renault says that dyno testing of its 2017 power unit is delivering some 'encouraging' results as it eyes a step forward in form next year. 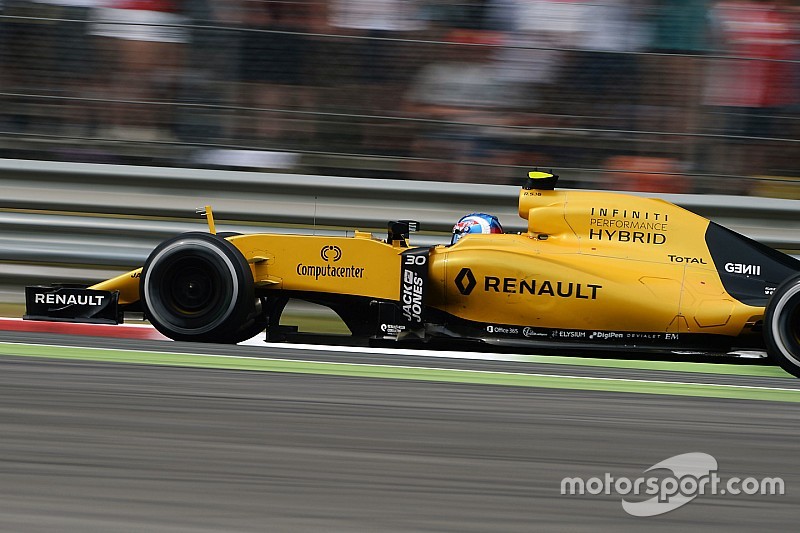 The French car manufacturer has made good progress in power terms over the course of this season, and is poised to introduce another minor upgrade for this weekend's Singapore Grand Prix.

Its focus, however, is on making a bigger step forward in 2017 which will allow the works team to move up the grid and Red Bull to get itself back in the hunt for regular race victories.

Renault team principal Fred Vasseur said that there was no illusion that the gap to Mercedes had been closed down completely yet, but he suggested that hopes were high of decent progress for next year.

"We had two good steps, the first one before the race [in Melbourne] last winter and the other one for Monaco/Canada," Vasseur told Motorsport.com. "I think we are not so far from the Mercedes.

"We are still a bit behind, but if you have a look at the GPS data we are a bit behind but we are improving.

"We know exactly what we have on the bench for 2017 because the V6 is already on the bench and I think it is encouraging."

Although Red Bull's ambitions are on the world championship next year, Vasseur has said that if his Enstone outfit can finish in the top five then it should be satisfied with the job it has done.

"To cross the line then we can imagine to be in a position to be P5 next year. I think it will be a good achievement."

Although Renault's current campaign has fallen below expectations, Vasseur has reiterated that the outcome was not a real surprise considering how little development had taken place during Lotus' final year.

"We knew the numbers and we knew perfectly that the car was designed at the beginning of 2015 and had not been developed at all during the season," he said. "Plus it was designed for the Mercedes engine, and we kept exactly the same chassis to put the Renault inside.

"To go on track was a bit challenging. We took the company over two months before Barcelona and for sure you cannot expect to be in a good shape.

"Okay you can say that last year they were able to do good results but it was designed in 2015 for 2015 and for the Mercedes engine. So if you are deeply involved in the system then you say no way."