Red Bull Formula 1 driver Sergio Perez says he was happy to help Max Verstappen win the 2021 world title with a "crucial" defence against Lewis Hamilton, but admitted it was "not a place I wanted to be in".

After Verstappen and Hamilton made their first pitstop in a gripping Abu Dhabi Grand Prix title showdown, Perez was put on "Plan B" by Red Bull, which meant he was asked to stay out on worn soft tyres to try and hold off Hamilton and let Verstappen close a seven second gap.

Hamilton used the DRS to pull alongside Perez on the run down to Turn 6 on lap 20, but Perez immediately cut back across and kept the Mercedes driver at bay for a full lap, before he had to let him go in the same corner on Lap 21.

Perez's fierce defence drew praise from Verstappen, who called him "a legend" as it allowed him to cut the gap to Hamilton to just two seconds.

After Verstappen grabbed the F1 title in a controversial final lap shoot-out, Perez said he was happy to play his part for the team but also admitted he didn't want to interfere too much in the title fight.

"It was crucial at that time of the race, because I knew that basically, Lewis had the race under control, he had the virtual and safety car windows pretty much open and he could have done whatever he wanted at the time," Perez said.

"He had the race under control, so it was pretty critical. But at the same time I was on extremely old tyres. It worked well. At the end of the day, I'm happy that I've helped Max and the team.

"It's a hard one because at the same time, you don't want to interfere too much in the drivers' championship. But I think above anything, it will always be my team." 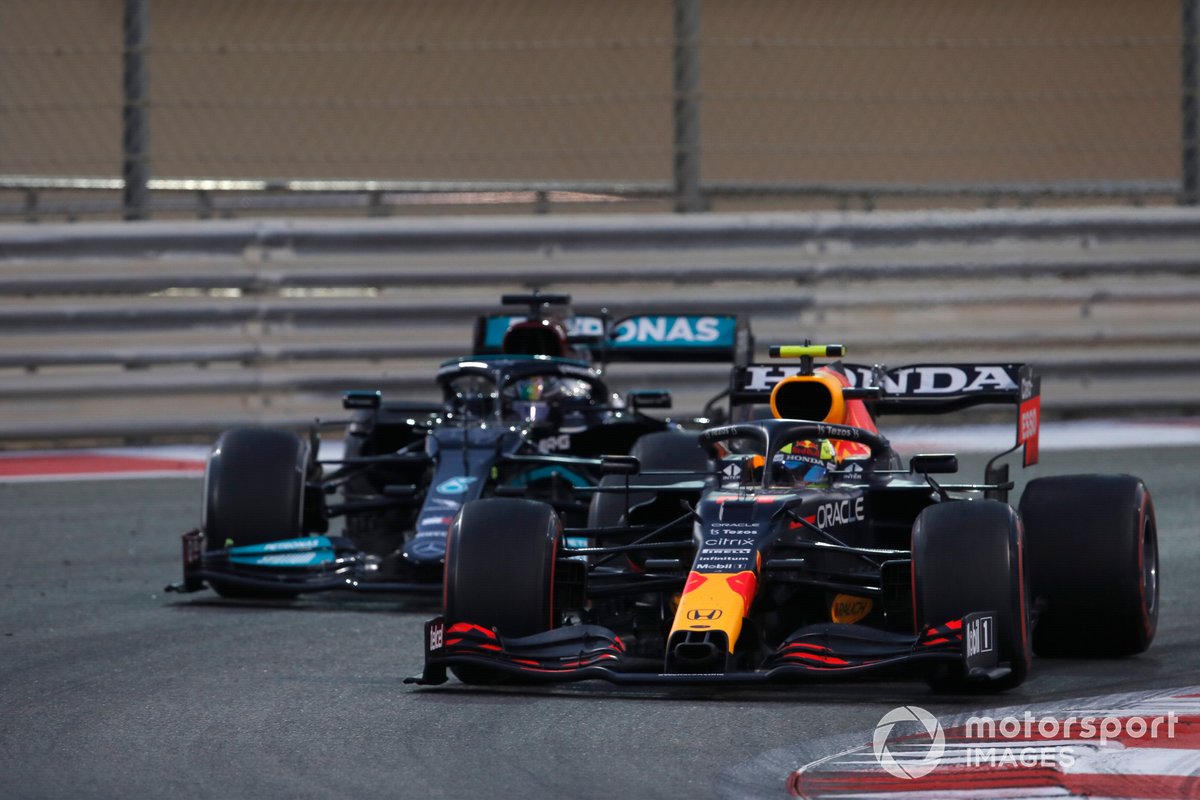 When asked by Motorsport.com if he was worried about getting his aggressive Hamilton defence wrong and potentially decide the championship with a collision, Perez said that did play on his mind.

"Yeah, at the same time," he admitted. "But obviously, I was in a position where I had not much to lose. It's not a place that you want to be in but at the same time I will always put my team above anything.

"It was a gamble because at that point you are just a piece of cake basically when you are after 18, 19 laps on the soft tyres and Lewis was on fresh rubber.

Perez retired from the race with three laps to go under the late, race deciding safety car because Red Bull was worried his Honda engine was about to expire.

That could have caused the safety car to stay out another lap and prevent Verstappen from overtaking Hamilton for the title.

"I didn't know anything at the time but obviously, the engine was on the limit," he added.

"And the last thing we wanted to have is a failure and then not have the opportunity for Max to have that lap. It was on the limit, and you don't want to engine blow up."

When put to him that Verstappen called him a legend, Perez responded: "Well he's the legend now, he's a world champion..."