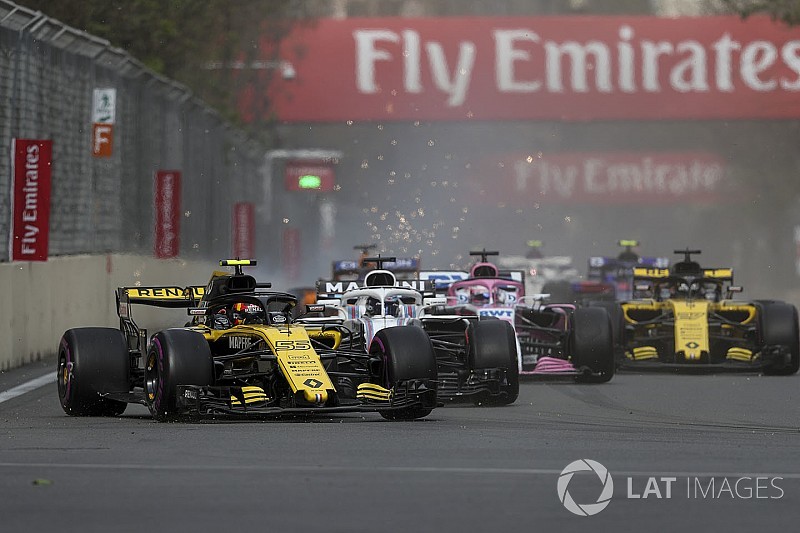 The F1 Commission has voted through last-minute changes to the 2019 aerodynamic package to aid overtaking – despite opposition from several teams.

A proposal to change front wing endplates to help cars follow each other, along with a bigger rear wing flap and thus a stronger DRS effect, has been passed.

However, an extra package involving bargeboards was not agreed to.

The vote took place on April 30, the last day to push through technical regulation changes for next season without unanimity being required.

Under F1 Commission rules the vote of as few as four of the current 10 teams are required to push a proposal through if everyone else – the FIA, F1, and sponsor and promoter representatives – are behind it.

Even so, several team bosses suggested in Baku that there would not be enough support to vote it through, with only Williams publicly expressing its support.

Although there has been no official confirmation it is believed that when it came to the vote up to six teams were still opposed to the plans, with sources suggesting that Ferrari, Red Bull, Renault, McLaren, Toro Rosso and Haas said no, and that Williams was joined by Mercedes, Force India and Sauber in voting yes.

The F1 Commission vote still needs to get approved by the FIA’s World Motor Sport Council to be put in to the 2019 rules.

While this should in theory be a formality, it is unclear if Ferrari could try to use its veto over technical rule changes to block the tweaks.

To do so Ferrari would have to prove that the tweaks were against its own interests rather than something it didn’t like.

The wing changes proposal was a direct response to the lack of overtaking in the Australian GP, which prompted the FIA and Liberty to look for ways to make improvements for 2019. They were able to draw on some of the research already conducted by F1’s team of engineers for the 2021 package.

As previously reported, a meeting of team technical bosses in Bahrain failed to come to a firm conclusion on the ideas put forward in what had become a joint FIA/F1 project.

It was subsequently agreed that in an attempt to reach a conclusion by the April 30 deadline for regulation changes, teams would conduct some extra CFD research of their own, the results of which were then submitted to the FIA. A full report, including those results, was then sent to teams on Friday, which formed the basis of what they were voting on.

The extra bargeboard changes were added relatively late, and were not part of the CFD research conducted by the teams, which helps to explain why they were not agreed on.

Williams chief technical officer Paddy Lowe has been the most vocal supporter of the changes.

“I think it all makes sense,” he said in Baku when asked by Motorsport.com.

“We’ve got another three years of this formula, and if we don’t make changes at this point, it becomes a bit pointless, because there are a huge set of changes for 2021. So this is the time that F1 should act and act decisively for the good for the show.”

Other teams suggested that rather than make piecemeal changes the sport should wait until 2021 and do it all in one go.

“In my opinion F1 is good enough for the next two years,” Renault F1 boss Cyril Abiteboul told Motorsport.com.

“It can be slightly improved with twists to the sporting regulations, and we will make proposals on ways to make the show better, but we should not distract ourselves from the main objective, which is 2021 overall. Let’s do something proper, which is the whole car, the whole set-up of F1, budget cap, and so forth in 2021. For the time being we have a good product.”

“I would be surprised if it’s agreed,” said Red Bull team principal Christian Horner. “They’re a snapshot of 2021, but taken in isolation.

"There are consequences that are detrimental, so better to leave things alone as they are for now, and then do a complete package for 2021 that encompasses everything.”