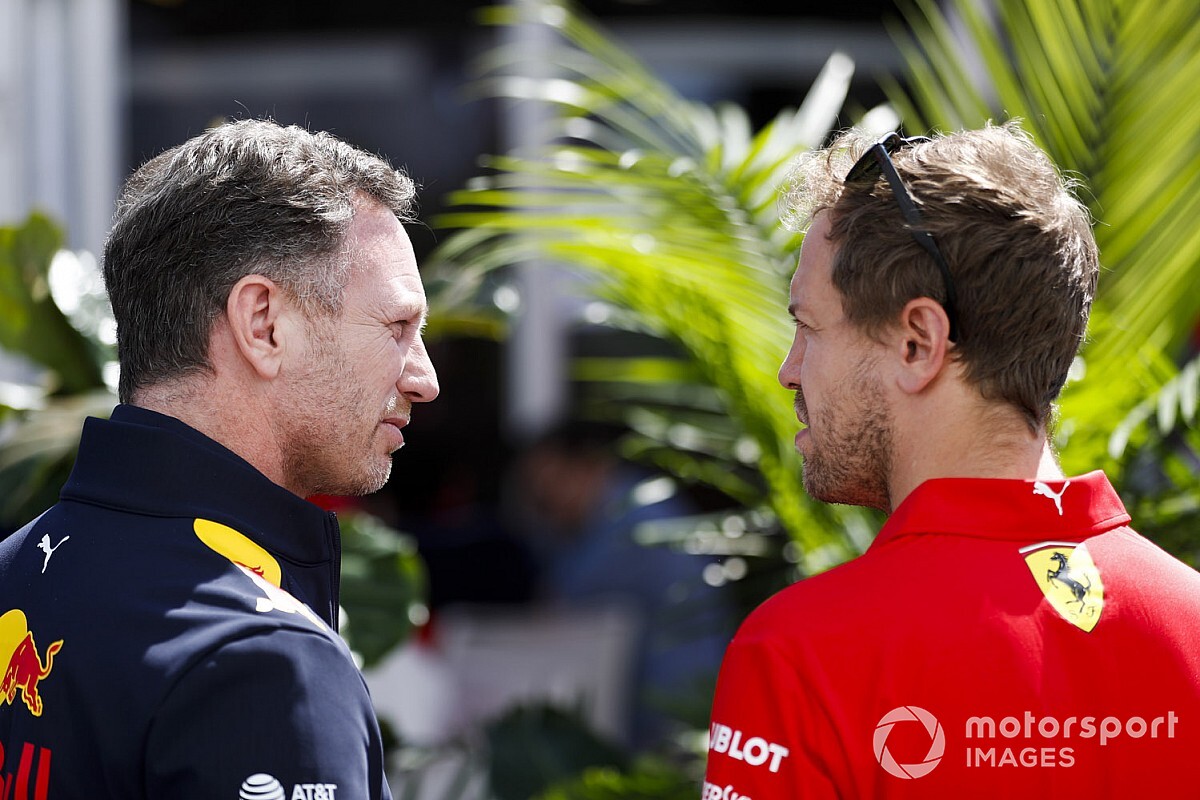 Horner said F1 is not seeing the “real Sebastian Vettel” at the moment, suggesting that he is struggling in his current environment.

Vettel won four world championships with Red Bull in 2010-13 before joining Ferrari in 2015. Since then he has won 14 races with the Italian team, and was runner-up in the championship in both 2017 and 2018.

However, he has not be retained for 2021, and thus far this season he has struggled to match teammate Charles Leclerc, scoring 16 points to Leclerc's 45.

Horner was asked by Motorsport.com if Vettel was struggling now in part because cars have changed since he excelled in the days of blown diffusers.

“Well, not really,” said Horner. “I mean, Sebastian drove with refuelling, no refuelling, blown diffusers, no diffusers, f-ducts, no f-ducts, DRS, no DRS. He drove a whole variance of different cars over the years.

“And obviously what he achieved in the period during those years with Red Bull was quite special. I think he's the third most successful driver in the history of the sport.

“And he has achieved some incredible things, many records which will stand for some time. So, for whatever reason, things aren’t working for him at the moment. I think any driver has to be happy in their environment, and you can see that he's carrying quite a lot of weight on his shoulders.

“And that has a bearing on any on any sportsman, on any athlete. So I don't think we're seeing the real Sebastian Vettel at the moment. He’s obviously having a difficult time with the product that he has at the moment. But you can't take away anything that he's achieved obviously in his career to date.”

Vettel himself insists that he hasn’t given up on 2020, and he wants to finish his Ferrari career on a high.

“Well the year isn’t over,” he said in Spa on Thursday. “So I think as a team we obviously try to make progress, and individually try to make the best out of the situation.

"It is what it is, it’s not an easy one, but as I said, we are trying to make the most out of it. I trust the people that I have around me, the guys in the garage.

“There’s a lot of people, I’ve said this before, who have given so much over the years. It’s only a sign of respect to give everything that I have back as well, independent of the amount of races that I have left for the team.

“So I think I don’t look at it that way to be honest, I don’t look at the negatives or the bad things. I think first of all, I’m not counting the races, I’m going race by race, and I’m trying to do my job, to do the best I can looking forward. I’m always optimistic, and rather see the opportunity than the struggles.

“Independent of what happens next year and the years after that, I’m trying to enjoy the time that I have left with the guys that I’ve spent so much time with in the last years.”

How Sakhir GP will smash a 46-year-old record