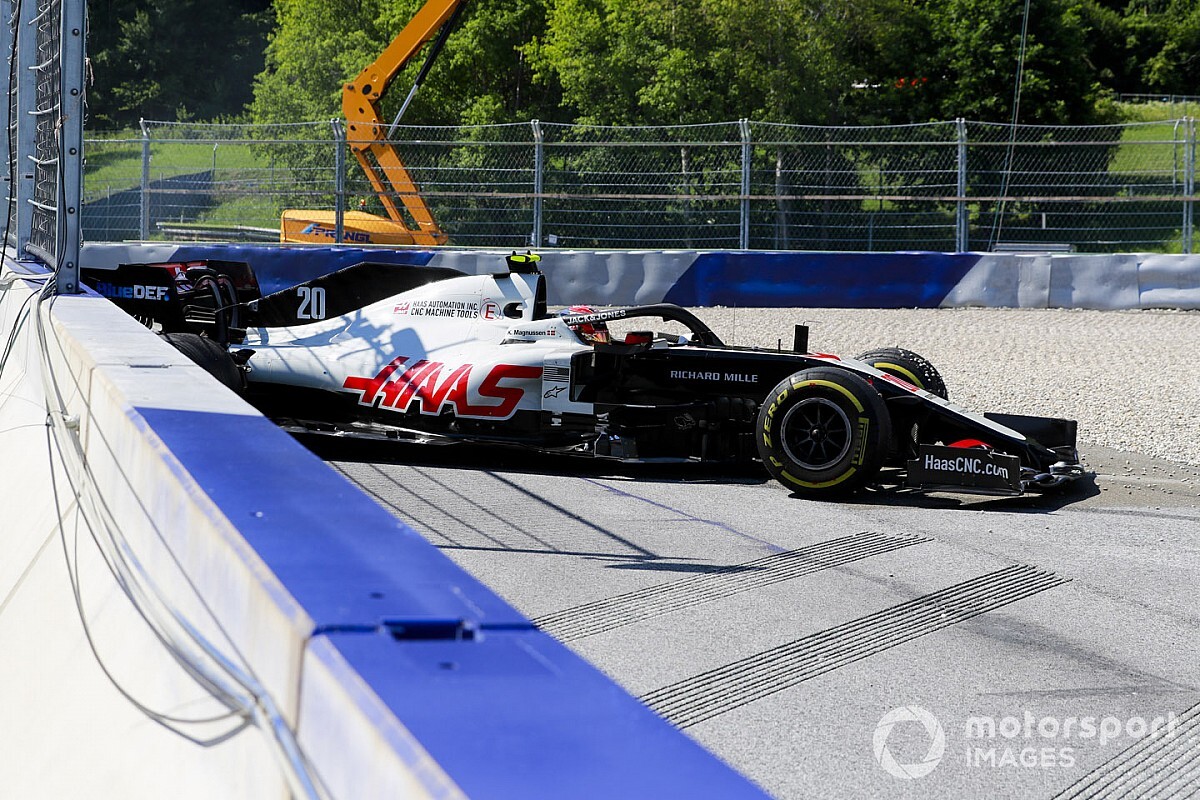 Haas Formula 1 team boss Gunther Steiner insists that the team didn't take an "unnecessary risk" by going too marginal on cooling in the Austrian Grand Prix.

Both drivers suffered overheating issues from early in the race, and both retired with brake failures, with Magnussen completing only 24 laps and his team mate managing 49.

Steiner insists that the US-owned team hadn't anticipated any issues in the race in Austria, even after two days of practice and qualifying.

"The brake issue, I don't know why it came up, we're still investigating," he said when asked by Motorsport.com.

"They overheated pretty early. We needed to manage it to get to the end of the race, but we didn't think it was this dramatic, that they will break or they will not last.

"Romain had the same thing as Kevin, and we were just calling in on the radio when he had the failure because we saw that it had gone extreme, his wear as well. So they just wore out, due to overheating, so we need to find out why we had all this overheating today.

"We were pretty sure that we can survive. Brakes are always an issue here, but we didn't expect it to be this big of an issue that you cannot finish the race.

"Cooling the brakes, it's got a dynamic influence on the car, and therefore you go with as little as possible, but it is just an estimate. You make how much cooling you need.

"For sure you go to the limit of what you think but you you try not to go over the limit for aero reasons, because cooling normally shouldn't be an issue, but if you cool more, you lose aero performance. We didn't take an unnecessary risk because we didn't expect it to be this bad."

The VF20 has only run in winter testing in Barcelona as the team was not able to do an extra filming day during the break, and Steiner admitted that extra running might have helped to flag the problem.

"Obviously if we would have had a test we would have noticed before what is happening," he said. "But I wouldn't blame it on that. There must be somewhere something to do with the correlation, because we didn't expect it.

"We were aware that we were running hot, but you need to run on the limit. But we didn't think we were this close to the limit, or over the limit.

"Running under the same circumstances would help because then you've got the actual data and the facts like otherwise, it's just a simulation. So for sure we need to look into it, why that didn't match our simulations?"

Despite the double retirement Steiner was not unhappy with the pace of the car when it wasn't compromised by the brake issues.

"I think it wasn't bad, we could keep up because we had to start to really lift and coast very early on from the first laps because we saw immediately that we are running hot with the brakes.

"So that doesn't help not only performance on lap time, but also to get the tyre to work good, and your brake balance you cannot change because otherwise it deteriorates.

"Kevin was happier than Romain was to be honest, so I think we have to build on that one and see that you can get a race to the end, because I think we could run with the cars which were around us."