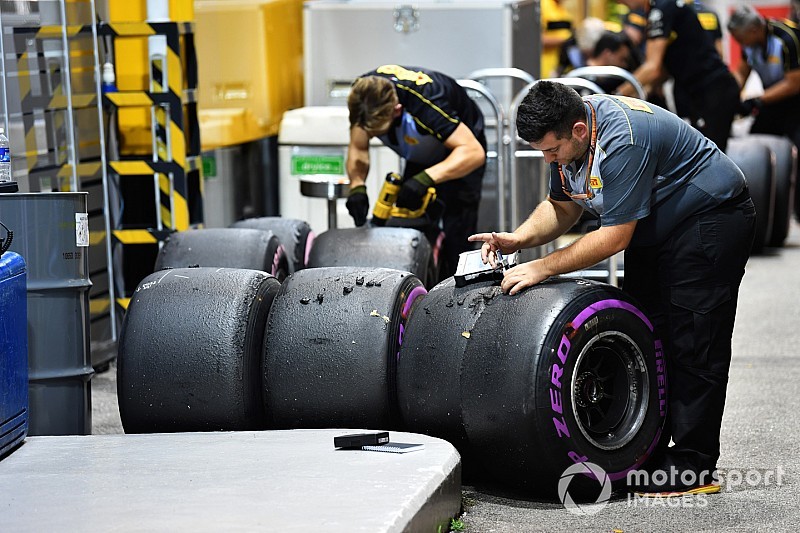 Formula 1 drivers' body, the GPDA, plans to discuss concerns about tyres and the state of racing in a meeting in Brazil on Friday, amid mounting frustrations with the sport.

An increased reliance on tyre management, plus an ever-widening gulf between the top three teams and the rest of the field, has prompted drivers to get together and work out if they need to step in to try to improve things.

Daniel Ricciardo said that while the latest tyres allowed drivers to push harder in certain circumstances, the need to look after rubber to minimise pitstops meant that there was still something lacking from a driving perspective.

That is why the subject of tyres has been added to the agenda of Friday's GPDA get-together, which will take place after the official drivers' briefing.

"I don't think anyone ever seems to be satisfied," said Ricciardo about the tyre situation. "They wanted a tyre we can race harder on for longer, and I feel now we're nearly getting that.

"But I don't know how to have a tyre that we can push hard on but is going to degrade, so we can still do a two or three-stop. I feel we're just going to drive slower, like we're doing now."

Although the issue of tyres – and whether degradation and management has got too much – has been singled out as a key point for the GPDA discussions, Romain Grosjean says that wider F1 issues have set some alarm bells ringing.

"It's not only tyres," said Grosjean, who is a director of the GPDA. "I feel, and I don't want to speak for everyone else, but I feel like we need to give our feedback and maybe try to do a bit more because the races aren't fun.

"The delta between the big teams and the small teams is too big. Plus the tyres being so complicated to understand, to drive, if you don't have the downforce you destroy them and you open the gap again."

Grosjean said the idea of the GPDA discussion was to gauge the feelings from all drivers.

If there was a consensus about what needs to be done, then that could be formalised and put to fans, the media and F1's rule makers to try to make the sport better.

"If we get to somewhere where everyone is happy with what we have discussed, and we have got bullet points, then we should move them forward to you guys, to Liberty or whoever. [It's important] we don't sit back and don't do anything for the sport we love."

Toro Rosso's Pierre Gasly thinks the current frustrations with tyres showed that the drivers needed to speak up more if there was any hope of making the racing better.

"There are many things we can improve but there's clearly one aspect that could improve racing: if we had more robust tyres that are less sensitive to overheating," he said. "It will give us the opportunity to follow other cars for longer.

"At the moment you do three corners really close from another car and you start sliding and three degrees of temperature on tyres and start to lose performance. It's a snowball effect, the temperatures keep increasing and you're done.

"It's something Pirelli should focus on. We told them already, they need to respect what FOM asks them so it's a topic we discussed many times. Probably as drivers we need to be stronger in our opinion, our view and desire of what we need for the future."