Sep.6 (GMM) It is perhaps the most feted podium on the F1 calendar, but Briton Jenson Button doesn't enjoy standing on it. 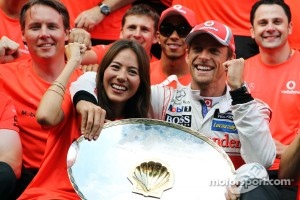 In McLaren's official pre-race preview of the Italian Grand Prix, the British team said Monza's famous "Tifosi" are "sure to give every team a lot of support" this weekend.

The Telegraph quotes him as saying Monza is "not one that I enjoy standing on the podium at".

Told that the red sea of Tifosi screaming support for Ferrari from beneath the podium must be a sight to behold, Button answered: "Yeah, I don't know.

"I don't like people booing. I'm not used to football crowds.

"Those three stand out for me as being very special circuits. The only one missing is Silverstone, my home Grand Prix."