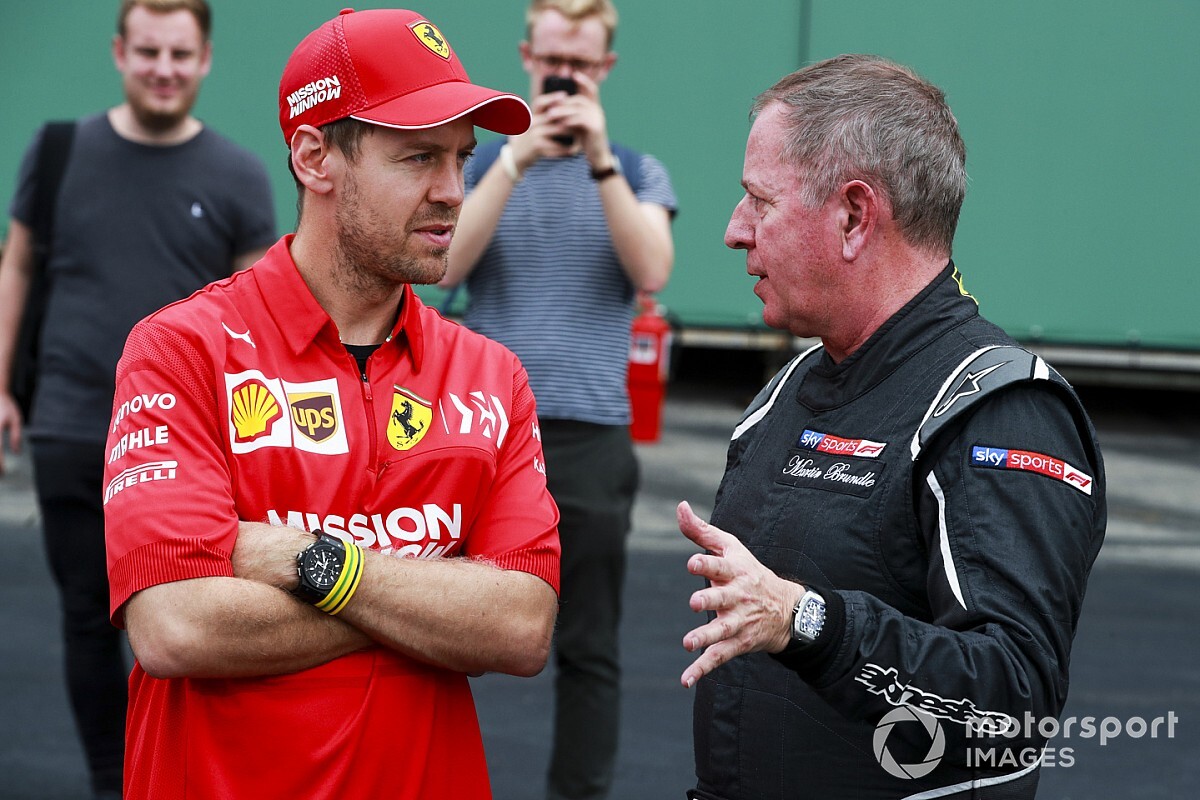 Ahead of the Hungarian Grand Prix, there was huge intrigue surrounding Vettel's future when Brundle announced that the four-time world champion had requested to do an interview.

Amid the backdrop of speculation linking Vettel to Aston Martin, the Vettel chat prompted suggestions that he wanted to speak out on certain topics.

In the end, Vettel's interview did not offer any huge revelation about his future, and Brundle has explained how the hype surrounding it had been blown up by an innocent comment he made.

Speaking to Motorsport.com about the background to the Vettel interview, Brundle said: "I met him on the corner of the TV compound [in Austria].

"Then I stupidly mentioned that, because Crofty [David Croft] was supposed to throw to Ted [Kravitz] in the grandstand and he missed, as obviously we've got completely different systems to what we would normally have at a grand prix, and somehow Crofty thought he had to throw it to me.

"I was walking back out, and I just heard something about Vettel. And I said: "Oh, yeah, sorry, I didn't know you'd come to me Crofty. Vettel? Yeah. Actually he's asked me for an interview."

The way Brundle phrased his comment was enough for speculation to take off that there was something more to the interview than normal. But the former grand prix driver said that he had not intended to build the interview up into something it was not.

"Of course that turned into 'Sebastian Vettel is going to retire, he's asked Brundle for an interview.'

"It was nothing more cunning than that. And it was my own stupidity because I suddenly was live on air and wasn't expecting to be.

"If that fills you in on how all that came about, there was nothing – as so often happens in these stories. There's nothing more exciting than that."

Reflecting now on what he thinks Vettel will do, having conducted the lengthy interview with him, Brundle reckons the German will only stay in F1 if he thinks he has a chance of winning.

"My takeaway from – I think it [the interview] was 19 minutes – was that he will carry on if he can find a drive that he thinks will lead to winning," he said.

"He won't tread water in the midfield or race for the sake of it, just to be – what did he say – an F1 driver. I think he put his hands up like that [puts hands up].

"I thought he seemed very mature about it. I asked him how it feels that he's no longer in control of his own destiny really. He surprised me in a way. He said he's found that exciting.

"I think he's quite down to earth lad, quite a practical lad. We don't know that much about him, because he doesn't do social media stuff and that, so I've always enjoyed talking to him. And I think I described him as an adult in a post and that's kind of how I see him, an adult amongst boys sometimes.

"But he's come to that point where a lot of sports people get to where you have to take stock of where you're at, and what motivates you."

He added: "The bottom line is, I think he will seriously consider the Racing Point / Aston Martin / Mercedes B team option."

"Outrageous" Mercedes pace could have led to more design copy