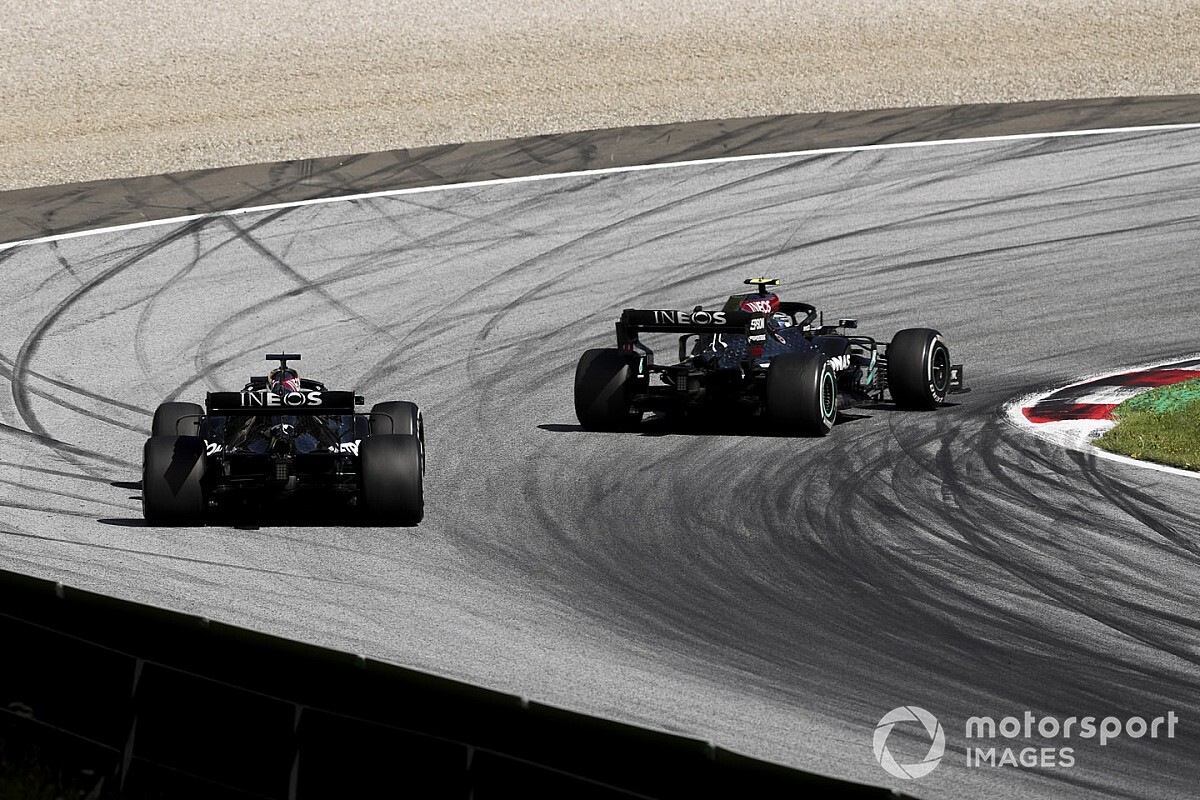 Mercedes Formula 1 driver Valtteri Bottas says he wasn't trying to back teammate Lewis Hamilton into the pack at the Austrian Grand Prix.

In the closing laps of the race Hamilton was running second when he was handed a five-second penalty for his clash with Alex Albon, and he was thus desperate to stay sufficiently clear of his immediate pursuers.

However he had to run at the pace of race leader Bottas immediately ahead, as given the fraught circumstances of the final laps Mercedes opted not to issue orders and ask the Finn to let Hamilton through to build a gap.

Bottas dropped his pace significantly on the 70th of 71 laps before picking it up again, and after the flag fell Hamilton was demoted to fourth place by Charles Leclerc and Lando Norris, both of whom stayed close enough to be within the five-second margin.

Asked why his penultimate lap was 2.5s off the pace that he had been running, before he sped up again on the final lap, Bottas said that he was preparing for a final assault on the fastest lap bonus point.

A yellow flag for the Daniil Kvyat incident also played a part.

"When you're in the lead you of course want to minimise any risk," he said. "And you obviously have to slow down at least half a second and ideally more for double yellows. So I did that.

"And then I also knew that there's going to be an opportunity to try and go for the fastest lap of the race, which would be silly not to, even though we couldn't use the kerbs, but at least to try within the limits. So I was charging the pack as well."

Hamilton insisted that he trusted Bottas not to have slowed him down deliberately.

"I just saw Valtteri just now," said the world champion. "And honestly I know Valtteri better than probably a lot of other people, being that we've worked so closely over these last few years, and that's not something that was on my mind and something that I would ever think that he would do.

"I know that he wouldn't do something like that, he's a pure racer and wants to win through pure, merit. And I believe that when he says that, even though he doesn't need to say that."

Bottas also insisted that there is "no tension" with Hamilton after an eventful weekend.

Prior to the race battle in qualifying Hamilton's final run in Q3 was compromised when Bottas – who was already on pole after the first runs – went off in front of him.

Hamilton earned second place, but he was subsequently demoted to fifth for a yellow flag offence at the scene of his team mate's excursion.

Bottas admitted that there had been an unfortunate set of circumstances over the weekend, but stressed that the air had been cleared with his team mate.

"There are incidents and unlucky events," he said. "And I'm sure you all know that in F1 many things can happen and sometimes things just go the way they go.

"He is pretty experienced, Lewis, in this sport, so he knows things can happen. So no tension. But we had a good team result in the end.