Aggressive Alonso plans to stay on F1's “dark side”

Fernando Alonso says he plans to stay on the “dark side” for the rest of 2021 after an aggressive performance in Formula 1’s first sprint event at Silverstone.

Alonso opted for soft tyres for the start of the 17-lap contest, and in a stunning first lap he jumped from 11th on the grid to fifth place.

He then defended hard, initially from Lando Norris, and then Daniel Ricciardo, earning complaints about weaving from the McLaren team.

After both McLaren drivers passed him he successfully held off Sebastian Vettel to secure seventh place at the flag, with a net gain of four places on his qualifying result. At one stage his engineer passed on a warning about alleged movement in the braking area.

When asked by Motorsport.com about that warning message, Alonso said he was "surprised" to receive it.

“I never moved under braking, I was moving at the beginning of the straight," he said. “But I don't care, to be honest. I've been on the other side for now nine races. So, you know, it's gonna be the same for the remainder of the year. I will be in the dark side. This time...”

Asked if he hoped to have another productive first lap in Sunday’s Grand Prix, he promised that he will stay aggressive.

"Yes, I will try. The guys in front, they are fighting for bigger things than us. So we will be aggressive. We've been aggressive in the last three or four races. In Baku it was a two-lap race, and we recovered many places.

“In Paul Ricard and in Austria we recovered a lot of places, but they overtook us outside of the circuit on lap one with no penalties. Here it seems a little bit more difficult. So let's see if we can recover places tomorrow, and everyone stays on track.” 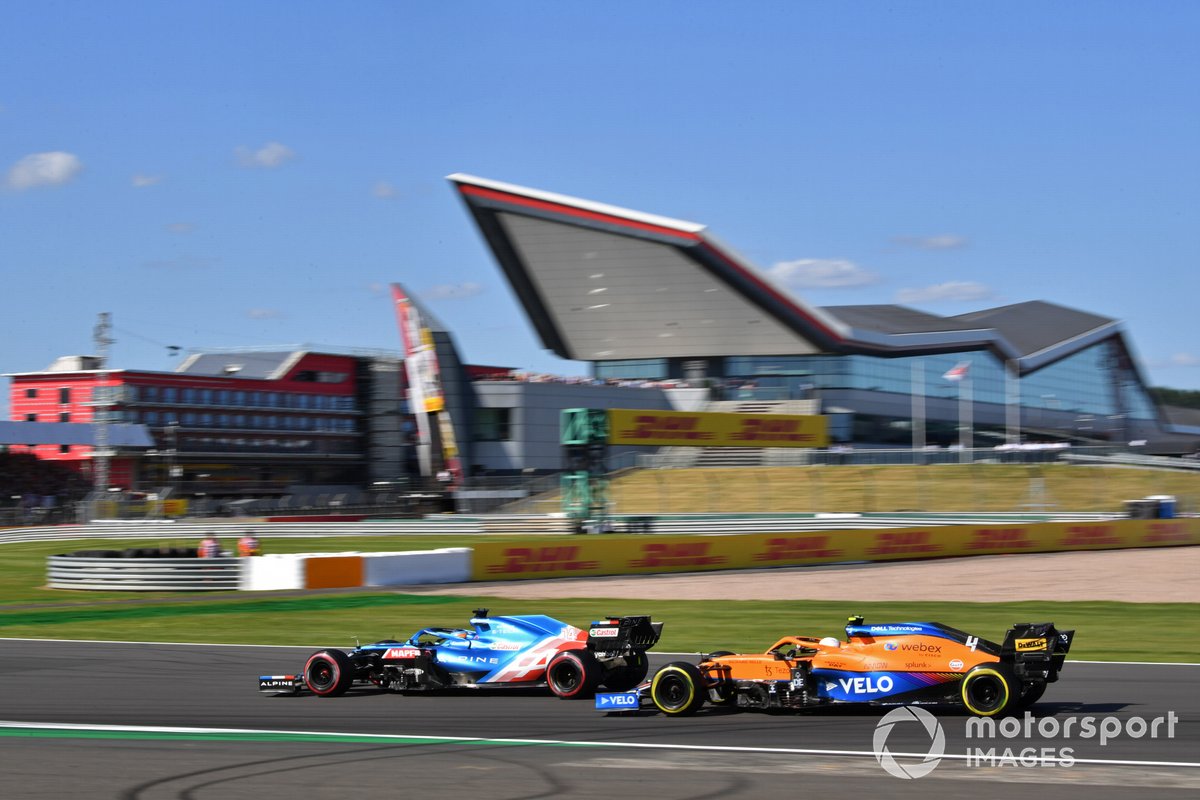 The Spaniard agreed with suggestions that his first lap charge had been among the best of his long F1 career.

“Yeah, I think the first lap was one of the best," he explained. "I know there are a lot of first lap performances that are understood like good ones, especially in the Renault days with a very good start. But this one it was not only the start into Turn One, it was Turn Three, Four, Six, Nine. So it was a more complete lap.”

Elaborating on where he made up ground, he said: “I think the first lap was a combination of things. The start was better than Carlos especially. It was not too different compared to Sebastian and some other cars. So Carlos was made in the start.

“And then Sebastian was made in Turn One. And then it was some quite some high risk manoeuvres. One was with the McLaren and Perez in Turn Four. Then Perez again in Turn Six, Norris in Turn Nine.

“I guess if I was fighting for the championship, I will not make those manoeuvres, because there is more to lose than to gain. But we are in a position that we can take maybe more risk, and benefit also from the red tyre first lap performance."

Alonso conceded that it won’t be easy to hang onto seventh in Sunday’s Grand Prix.

“We saw today blisters for many people already in 17 laps, so tomorrow is going to a long race for everybody," he said. "Quite warm tomorrow as well. In a normal qualifying, we were 11th. We start seventh, I'm not sure that we are the seventh fastest.

"I expect a difficult race but let's see what we can do, and we will keep attacking.”

The successes and warning signs from F1's first sprint race