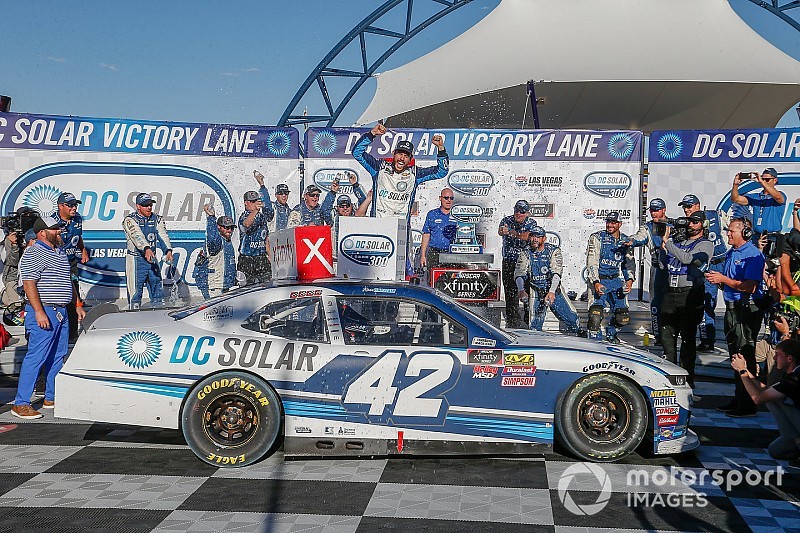 The win is Chastain’s first win in 132 career starts.

At Darlington (S.C.) Raceway two weeks ago, Chastain won both stages in his debut with CGR but was involved in an incident with Kevin Harvick in the final stage that knocked both out of contention.

Chastain cleared Allgaier on a restart with six of 200 laps remaining and held on to win by more than a second.

“Holy cow! I’m just a watermelon farmer from Florida. I’m not supposed to do that,” Chastain said. “This shows you anything in your life is possible. I gave one away at Darlington and this was awesome racing.

“I never thought this would happen. It’s incredible. (Justin) Allgaier was awesome. He’s insane. I had to play possum there (on the restarts) and then changed it up. The car was just amazing.

On Lap 125, Ryan Preece spun exiting Turn 2 to bring out a caution. All of the led-lap cars pit for fuel and tires.

Chastain was the first off pit road and remained in the lead on the restart with 71 laps left. He was followed by Custer and Allgaier.

Chastain got around Allgaier with 52 laps remaining to reclaim the lead as Custer moved up into second and Allgaier dropped to third.

Just as some drivers had started some green-flag pit stops, Vinnie Miller spun to bring out a caution on Lap 176.

As they had the whole race, Chastain was first off pit road and remained in the lead on the restart with 20 laps remaining. He was followed by Allgaier, Reddick, Custer and Bell.

With 18 to go, Reddick backed off and came down the track and into Chase Briscoe, who slammed hard into the interior wall, completing destroying his No. 60 Ford. Briscoe sat down next to his car for several minutes after exiting the vehicle before climbing into the ambulance for a ride to the care center.

On the restart with 13 laps left, Chastain remained out front, followed by Allgaier, Spencer Gallagher, Bell and Custer.

Shortly after the restart, Reddick was attempting to block Jones when he drifted down the track into Shane Lee, who then went up the track and into Hemric triggering another caution.

Chastain still held the lead on the restart with six laps to go, followed by Allgaier, Bell, Custer and Truex.

Chastain continued his dominance, leading 86 of the first 90 laps on his way to the Stage 2 victory.

Following the break between Stages 1 and 2, Chastain was first off pit road and led the way when the race returned to green on Lap 52. He was followed by Sadler, Custer and Bell.

With 30 laps remaining in the second stage, Chastain held a solid lead over Hemric. Sadler was in third, Custer fourth and Allgaier fifth.

On Lap 64, Tifft suddenly turned left and spun down the track and into Reed. Reed’s No. 16 Ford then went up the track and hit the wall. Both cars received heavy damage.

After getting out of his car, Reed sat down against the car door before getting in the ambulance and taken to the infield care center. He was not injured.

“Knocked the wind out of me pretty bad,” Reed said. “I’m all good. Nothing broken. Will be sore tomorrow.”

The race returned to green on Lap 71 and Hemric got a push and took over the race lead for the first time.

Chastain wasted no time in running down Hemric on the outside and retook the lead on Lap 72.

With 10 laps left in the second stage, Chastain had moved out to a more than one-second lead over Hemric. They were followed by Custer, Bell and Allgaier.

Chastain led all but three laps on his way to a dominating Stage 1 victory over Bell.

Sadler ended up third, Custer was fourth and Hemric completed the top-five.

Custer, the pole winner, led the first three laps until Chastain powered around him and into the top spot on Lap 4.

On Lap 6, Michael Annett and Preece made contact on the frontstretch to bring out a caution. The race returned to green on Lap 12 with Chastain in the lead, followed by Custer and Sadler.

Preece was forced to pit under green on Lap 15 to address what appeared to be a tire rub.

With 20 laps remaining in the first stage, Chastain held nearly a second lead over Bell followed by Custer, Sadler and Hemric.

With 10 laps left in the stage, Chastain built a 1.3-second lead over Bell with Custer remaining in third.

Garrett Smithley had to start the race from the rear of the field due to a wreck in qualifying and moving to a backup car.

Tifft had to start from the rear and had to make a pass-through penalty on pit road after taking the green flag for failing pre-qualifying inspection four times on Saturday. In addition, He his car chief was ejected from the track and he will also receive a 10-point penalty.